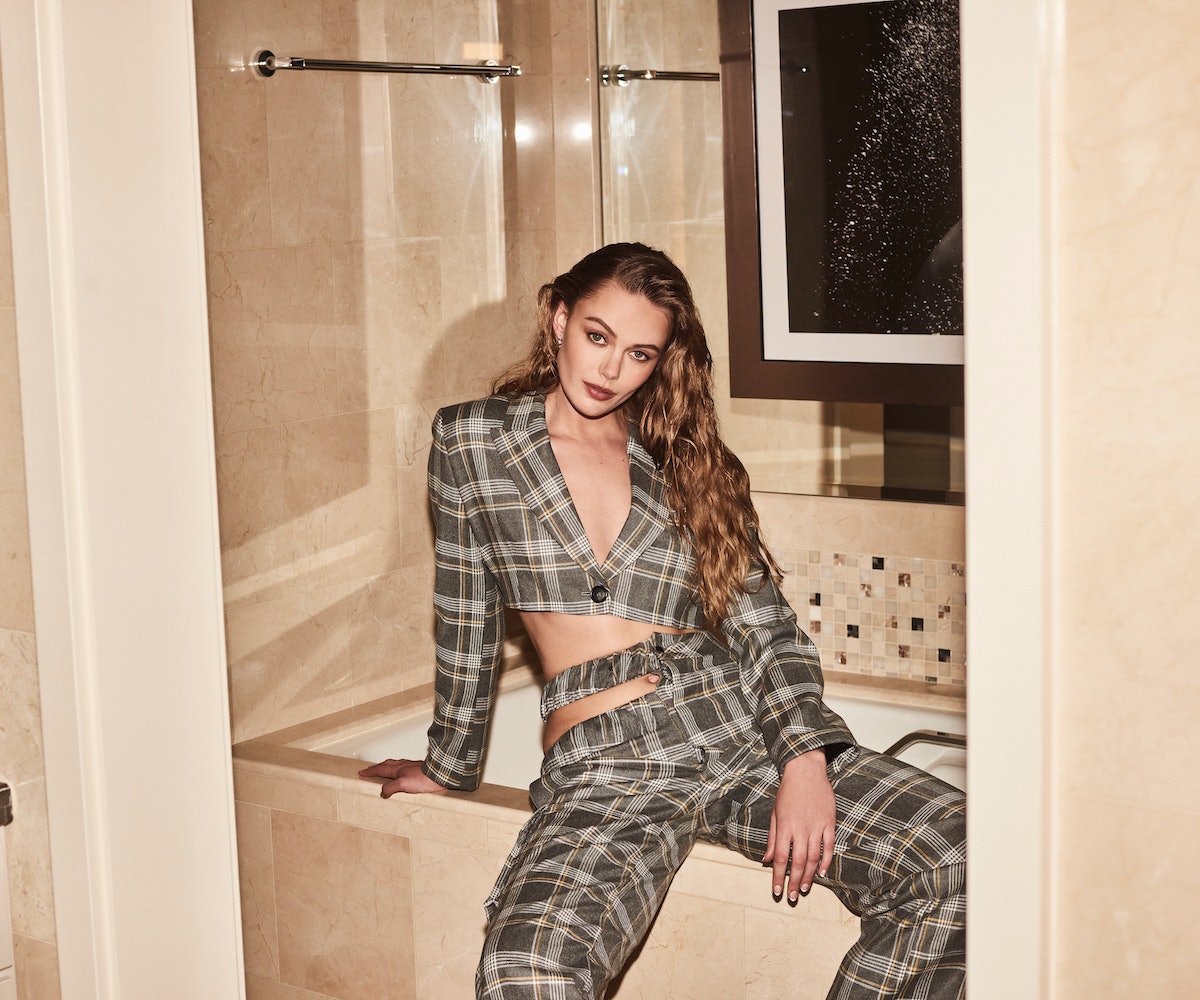 From 2010-2015, you couldn’t miss Frida Gustavsson. She was there, in every magazine, every time you turned a page. On billboards and television commercials. Reposted over and over on Tumblr. She was fashion’s “It” girl, securing dozens of the sorts of jobs most models spend their entire careers hoping to just get one of: she had a contract with Maybelline, was the face of Nina Ricci fragrance, walked hundreds of runways, covered dozens of international publications. Then, she walked away from it all. “When I started doing commercials, suddenly I was thrown into these large-scale productions, and I realized the excitement I felt coming back from a day of doing video versus a day in the studio,” she says over ZOOM from her home in Sweden. “I tasted the blood and I needed more. Call me a vampire, then, if you want. It became a necessity.”

Gustavsson never planned to be a model. As a teenager in Sweden, she was scouted in what she calls “the most Swedish thing ever:” shopping at IKEA. “I thought it would be a good way to make a little bit of money, travel the world, and gain a lot of experience,” she recalls. “I never really expected my modeling career to happen the way it happened.” The original plan, as a confident child with big dreams, was to be an actor. “I was this little theater monkey kid who liked my brothers be my backup dancers and extras. I would direct them and we'd make home music videos.” Then puberty hit. “I became incredibly tall, very insecure about myself and my body,” she says. “I lost that confidence of going up in front of people and being this character. Because I was struggling so much with myself and my own identity, it was difficult to then adopt the identity of something else.”

Modeling provided something of an in-between. The whirlwind life it demanded, she says, was a double-edged sword, as her confidence began to crawl back and her desire to act stayed firmly put. “On one hand, I had a really successful career. I was on covers of Vogue, working with people that I deeply respected and loved. And at the same time I would feel so hollow in a way, because I felt I had all of this creativity inside of me,” she explains. “When you're modeling, you don't ever really get to live your own ideas out. You're the vessel for other people's creativity — which is great — but I felt it came to a point where I couldn’t just be the executor of other people's ideas anymore.” Telling her agents she was walking away was another double-edged sword. “At first, they were really supportive. I don't think they quite realized that what I meant when I said ‘I'm going to do acting’ was ‘I'm going to move back to Sweden and go to theater school,’” she says. “They pictured it more as like Kate Upton — be the hot girl in Adam Sandler movies — and that was going to satisfy me. Not that there's anything wrong with that, but for me, I wanted to do it the proper way.”

That stereotype of the “model-turned-actress” and the roles they get is real, as Gustavsson found out after studying for several months at theater school, when she began to audition for film. Taking those roles, the token hot girl or pretty assistant, would have been the easy way. But now that she was finally doing what she wanted, Gustavsson was determined to do it on her own terms. “It's a conscious decision I've made to try to have a wide scope of characters, but also to be as authentic as I can be in the way that I approach my job,” she says. “Women are so scrutinized in society. We're so judged for caring too much, not caring enough, having too much makeup, having no makeup. We're always walking at the edge of the volcano. It's so easy for people to say someone only got a role because she looks that way, because their dad is someone. I've seen [nepotism] firsthand in my industry. At the same time, I would like to think that what I do with my work breaks free from the mold of playing into an idea of beauty. For me, I've never identified with that; if I would want to be perceived as beautiful, I would still be working as a model. But there's so much photoshop and stuff that goes into that anyway. It's just not interesting to me. What I find interesting are the human stories and the little floss and the little contradictions.”

It was with that perspective that the script for Vikings: Valhalla, Netflix’s latest grand scale epic, came her way. Immediately the role of Fredyis, the strong-willed female lead, a viking warrior who begins a journey across the seas, struck a chord. Something deep inside of her knew that she was meant to play that role. “She is someone I would really want to be more of in my life,” Gustavsson says. “She doesn't say anything unless she needs to. She's incredibly loyal and she demands her space. She can enter a room and go ‘Hey, I deserve to be here.’” When she booked the role, she says, she also took that mentality to set.

The magnitude of Vikings: Valhalla, a continuation of the hit 2013 series, makes other historical epics look like school plays. It will undoubtedly garner many Game of Thrones comparisons, and for good reason. The first season, now streaming, was shot over the course of two years in coastal Ireland. Days were long and physically intensive, shot on massive sets with hundreds and hundreds of extras. Gustavsson loved every minute of it. “You show up to sets and there are all these animals and extras, and some days there's very little acting involved, because you just look around and you're like, ‘Wow,’” she says. “We would all just look at each other and be like, ‘Guys, someone should really take pictures of this, or record this.’ Then you remember you’re on a TV show.”

To prepare for the role, Gustavsson worked with a trainer to build up the strength and body of a viking warrior fit to travel the seas for weeks on end. “There are a lot of fights for Freydis and I loved it. I got to go on a full training process beforehand. With my background in modeling, I've always trained to be skinny. I've always thought about my body in a way to restrain it, to make it small,” she says. “With Freydis, I could just screw all of that. I could go to the gym, lift weights, eat a lot of food, bulk up, so I could be a fierce believable Viking woman. Now I've become a gym buff, which is something I never thought would happen. I'm obsessed about going to the gym, lifting weights with my bros.”

When we speak on the evening before the premiere, Gustavsson is emotional, but above all, she’s proud. “I’m really thrilled that Freydis is the character that I get to show myself to a bigger audience for the first time,” she says. “I'm a hippie that way, where the universe takes us on the path we're supposed to go down, and then we just have to follow it.” Though she’d starred in many Swedish projects over the years, like all other actors, she’d faced rejection — something her modeling years had prepared her for. (“Not even Zendaya gets every single job — and she's great,” she notes.) For Freydis to be her breakout role felt like stars properly aligning.

Her time in the role also helped put perspective on her career — where it stands and where it can go from here. “In a lot of ways, this role made me feel I wasn't crazy. This is something that I can actually do,” she says. The collaborative process with Jeb Stuart, our showrunner, has been very impactful for me. He's really invited me to the table to hear what I have to say.” Promoting the role, and stepping back into the role of model (including the photoshoot she did for NYLON at L’Ermitage Beverly Hills) has also put her past career into equally clear focus.

“Modeling will ways be a defining part of my life. I grew up in that world. I started working when I was 13 and I spent over 10 years doing it,” she says. “It's not something that I do anymore, but I do enjoy the collaborative process between the photographer and the creative team. For me, clothes have always been a big passion. It's been a way for me, when I grew up in the suburbs of Stockholm, to express myself without having a lot of money. It was a great way to go into thrift stores and you could become someone else for a moment. But now I'm more fortunate to be able to collaborate on things. To feel that [the acting industry] believes that I have something to say has been truly a wonderful experience.”