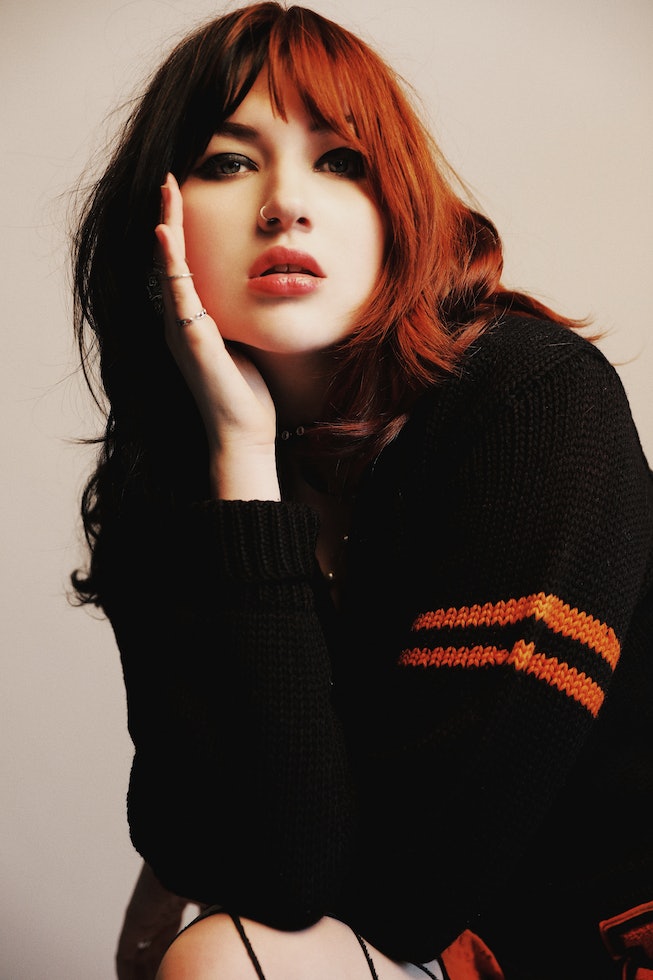 GAYLE, the 17-year-old singer-songwriter who’s hit song turned the ABCs into a redemptive anthem for telling her ex to f*ck off, asks if it’s OK to swear during our interview. After I emphatically gave her the OK, she describes the first time she wrote a curse into a song. “It was like, ‘Forgive and forget that I forgave you / Forgetting all the sh*t that you do,’” she says. It was one of the earlier songs she wrote with her best friend and collaborator Sara Davis. “We’re like, ‘Can we do that? Can we say that? I mean, why not?’” Her eyes, heavily lined with black eyeliner, go wide as she leans slightly into the Zoom camera, pushing back her orange and black Cruella de Vil hair.

Prior to “abcdefu” GAYLE had less than a handful of singles out. Now, she’s number one on the Billboard charts. The hit is subversive take on a song every English-speaking person knows by heart, centering around those hard first lessons post-heartache. The track zooms in and out between the universal and the personal — between her ex’s villainization of her and her disgust of his “Craigslist couch” and the sound of his voice. This single isn’t only a sardonic ABCs of heartache but a catchy allowance to dive into the richest of emotions. “It’s being unapologetically angry about something,” she says. Aretha Franklin might not only be her musical idol as a soulful powerhouse, but also for her notoriety to similarly spell things out.

GAYLE, began taking singing lessons at age 7, got a guitar from Target at age 9, and then started writing her own songs at 10. Her ambition was fostered by her incredibly supportive mom, who would drive them 10 hours from their Dallas, Texas, home so her daughter could experience Nashville’s Broadway Circuit. “I don’t want to half ass anything, and neither does she. That’s why she started taking me to Nashville. She’s like, ‘If we’re going to do this, we’re going to do it,’” GAYLE says. While most bars in Nashville wouldn’t hire a 10-year-old to headline, she capitalized on precious bathroom break time for musicians. “Most of the time, there’s no room to eat a burger or go to the bathroom,” she says. “I would just go up to people and be like, ‘Yo, do you want to go to the bathroom? I’ll play a couple songs on your guitar, and then when you’re singing, I’ll take your tip bucket, walk around.’ I was getting to know the artists while also getting to know the people who are at the bar.”

The commute for a long day’s work would soon change form. Two years later, Nashville would become GAYLE’s home. Two years after that, she would get noticed by American Idol’s Kara DioGuardi and eventually sign a songwriting and development deal with Arthouse. “It gives you the challenge of finding out who you are,” she says about the Music City. “Anytime I had a meeting with somebody wanting to work with me, they always told me who I was. They always said, ‘This is who we think you are.’ And anytime I did anything in Nashville in the same way that I was trying to do things in LA, people always said, ‘Tell me who you are. Tell me in 10 to 15 seconds, give me the elevator pitch.’ I needed to figure out who I was in Nashville to be able to stay true to who I was in LA. Because I felt the biggest challenge LA gives you is the challenge of staying true to who you are.”

Originally, GAYLE’s style dabbled in a bit of Christian and country music, but it was pop music collaboration that unlocked a new sense of freedom. After growing up in Dallas, where many opera houses had song choice specifications, and witnessing the expectations placed on country musicians — being told to lose weight or conform to a specific inoffensive femininity — pop music felt like daring terrain. “You couldn’t be rude; you couldn’t be offensive to people. And it’s not that even what I do is offensive. People just have the possibility of being offended by the things I say,” she says.

GAYLE will never give a diluted version of herself; her forthcoming debut project deals with what it means to be a human. “I’m really excited about having an open conversation about sex, and how that can, like, affect relationships and friendships,” she says. “Especially the progression of when you first start having sex, and when that’s something you’ve become accustomed to, and how that can affect relationships.”

As far as her legacy is concerned? “If people can feel more confident or open with themselves with their emotions, or be more considerate of themselves, or understanding their mistakes, and pushing themselves in more of, like, a positive direction for them and their mental health — if I can help create that in somebody in any way, that is all I need.”