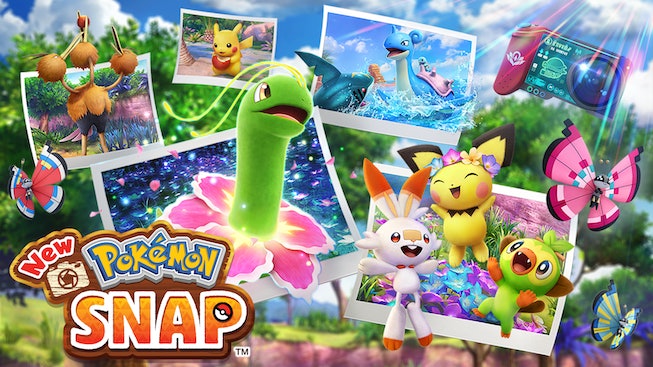 Grab a bag of Pokémon-approved snacks and your favorite camera, because a brand new Pokémon Snap is coming. The previous Nintendo 64 release is headed to the Nintendo Switch, with the April 30 debut of New Pokémon Snap.

Available for preorder now, the new Snap iteration will take aspiring Poké photogs on a journey through the Lental Region. Like its Pokémon Snap predecessor, this title will allow for players to explore and photograph Pokémon across multiple terrains and areas. Of course, you're outfitted with everything needed of a photographer, including a special set of wheels called the NEO-ONE, and plenty of Fluffruit, a tasty treat that attracts Pokémon.

In a press release, Nintendo explained a bit more about the title, revealing that players would help Professor Mirror and his assistant Rita on an "ecological survey to photograph Lental Pokémon thriving in nature." Completed photographs will be evaluated by Professor Mirror, and as the game continues, you'll uncover new Pokémon behavior and traits that are worth snapping.

Players got a more complete picture of the title in a new trailer, released on Thursday, January 14. This first complete glimpse of the much anticipated Nintendo Switch offering begins with two characters examining their cameras and vehicles.

The clips— which plays out like a peaceful Pokémon nature documentary — then takes you through some of the territories and areas they'll be exploring. Along the way, a few familiar Pokémon faces appear, including Meganium, Bidoof, and Heracross.

Get your first look at the new title, below.