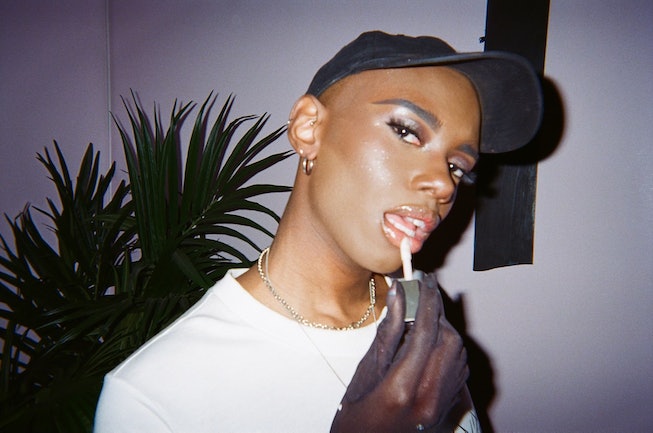 One of the biggest surprises an artist may experience when they play their first headlining show is finally coming face-to-face with their fans. For online pop sensation That Kid, who made his rousing headlining stage debut at the Brooklyn venue Elsewhere on Sept. 27, it was the sight of a packed, buzzing room to mark the release of his latest mixtape, Superstar, that made the night’s performance extra special. “I was convinced I was going to sell 10 tickets, and then when I saw as many people as I did, I was like, ‘Oh my gosh, there's a lot of people here to see me,’” he tells NYLON.

The cult artist who kicked off his career on Soundcloud crafting sparkling, maximalist pop (and whose tantalizing voice can be heard on Slayyyter’s early-career hit “Dial Tone”) is finally seeing just how wide his digital reach stretches in real life. Following four years of song releases, a couple of EPs and mixtapes, collaborations with artists like Raveena Golden and Tama Gucci, and his own wayward hits — like his glittering 2020 rework of Soulja Boy’s “Kiss Me Through The Phone” — he’s finally arrived here: the release of his biggest project yet, and his biggest stage.

To That Kid, Superstar, the 13-track album mining the excess of Y2K and flashy futurism of hyperpop, is more than just an opus to his future occupation, it’s a mindset. The 23-year-old song-maker recently realized that part of fulfilling the fantasy element of his flashy pop songs is also dressing the part, and he didn’t hold back on delivering his glossiest self for his headlining performance.

At his Sept. 27 show, he centered his look around a subtle showstopper piece, Weslah’s white corset tee. “I've only ever worn it one other time, but it was my headlining show. I was like, ‘This is the perfect place to really have the look together,’” he says. To complete the look, he paired it with a flouncy black tennis skirt, a dad cap, “some fancy Pumas,” and — the pièce de résistance — a pair of custom bedazzled opera gloves dotted with rhinestones that spell out his name, handmade from a friend.

“I feel like [fashion is] a way for me, to really elevate the vibe I'm bringing to my music,” That Kid explains of his venture into styling his own stage looks. “People a lot of the time will expect me to have really amazing looks. So, now I'm like, ‘Okay, I actually should probably commit to doing really amazing looks, for my performances.’”

The rest of his pre-show routine involved getting his beauty in check, courtesy of a lot of Fenty products, including his tried-and-true Fenty Diamond milk lipgloss — “I feel like I don't look like me without eyebrows, highlighter, and lip gloss,” he says — and finally taking the last few moments to fully relax, being careful to not get too wild. “For the most part, when I'm backstage, I'm bad, honestly,” he says, laughing. “I get a little bit... This show was the first time I didn't go on stage drunk!”

Reflecting on the show over the phone a few days after, That Kid is ultimately grateful that he was able to bring eight of his closest collaborators, friends, and supporters onto the stage, and witness his fans singing the words to nearly all of his songs — a sight that he’s going to have to get used to.

“You have to think you're a star, to be a star,” That Kid notes. “Obviously, you should always be humble and grateful and let people know how much they've truly done for you, and that's something I'm very big on, but you also have to have the mindset of ‘I'm a star and no one else can tell me otherwise.’ To me, I'm one of the biggest stars in the world. I might not be right now, but to myself personally, I'm f*cking huge.”

While getting ready for the show, That Kid took NYLON behind the scenes. Read on for more.

Had to get a preshow meal at Warude in Brooklyn with my friend Girl Roommate, who is also featured on Superstar! They have amazing fried chicken tacos.
I have really bad sinuses and they’re constantly inflamed so I usually take antihistamines to reduce the swelling. I can’t go on stage with a nose that doesn’t even work!

That Kid’s ‘Superstar’ is out now.