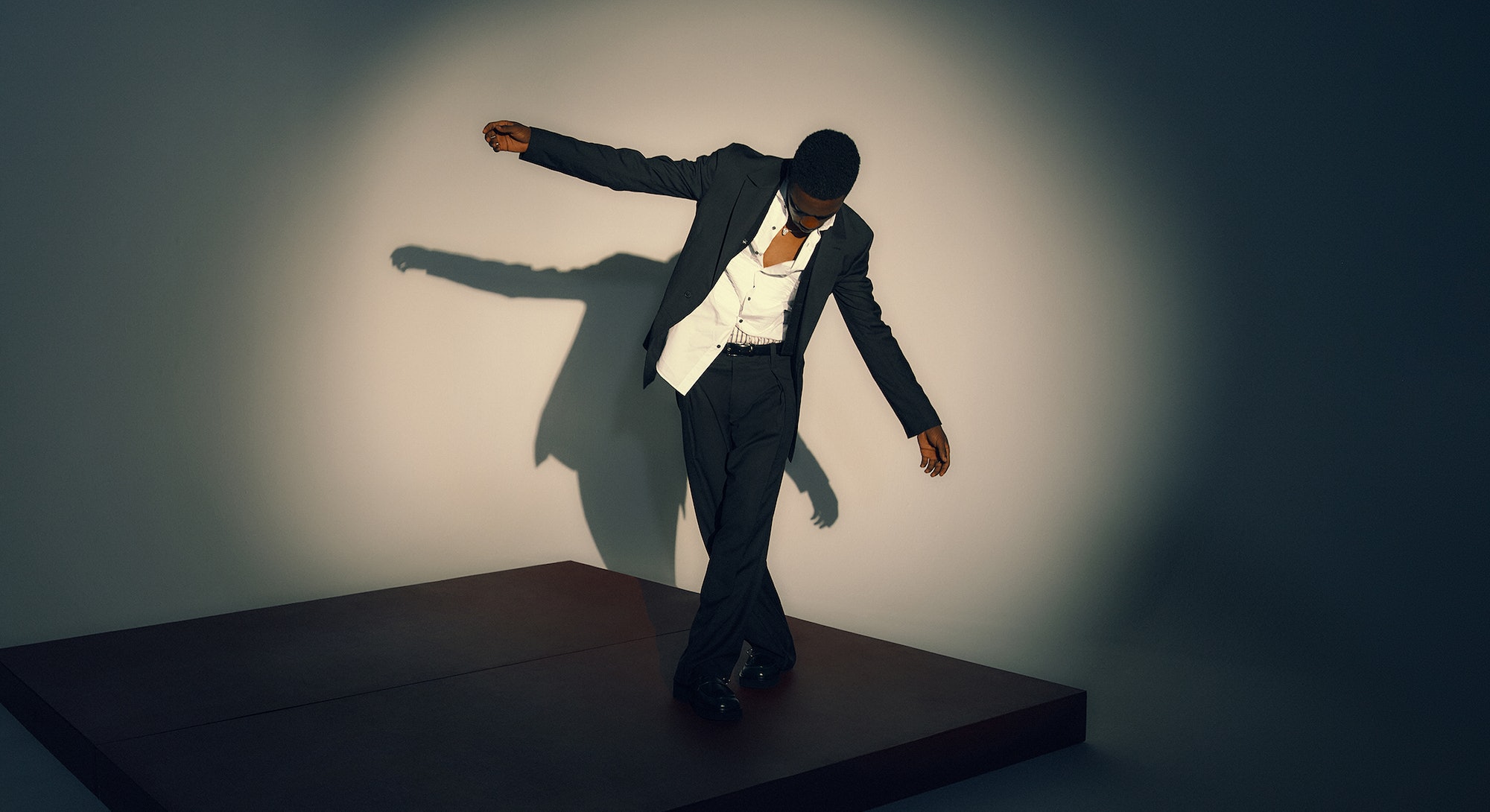 A few days before the release of his debut album, Giveon is chill — almost too chill. It’s Wednesday afternoon in late June, and we’re sitting in the airy, colorful lounge of his record label’s Los Angeles office, where members of his team are glued to their phones around nearby tables. Leaning back against the window banquette, Giveon, dressed in a sporty designer outfit — a varsity jacket paired with a Rick Owens tee, distressed jeans from Cease and Desist, Balenciaga boots — barely moves the entire time we’re together. Compared to the booming baritone you hear on his records, he speaks in surprisingly gentle tones, like what a teacher means by “inside voices.”

“What you would think an R&B singer would be like in his 20s, I’m sometimes the polar opposite,” the artist born Giveon Evans tells me. “If someone’s having a party, I’d much rather be at my 3-year-old cousin’s house or something.” But with Give or Take less than 48 hours away, he’s also bracing for impact. “I’m just trying to relax and get ready for the storm because the work is starting now,” he says. “The hard part starts now because it’s really just getting the word out.”

That shouldn’t be too difficult, considering the 27-year-old’s voice — so rich it might give you synesthesia — has been nearly inescapable in the past two years, with scene-stealing features on Justin Bieber’s “Peaches” and Drake’s “Chicago Freestyle.” Since his breakout single, “Heartbreak Anniversary,” Giveon has already become a seven-time Grammy nominee — his debut EP earned a Best R&B Album nod in 2020 with only 24 minutes of material — and performed a prime sunset slot at Coachella. He’s lighting up the fashion game, too: He’s attended the Met Gala twice and frequently walks red carpets in Chanel, which rarely offers menswear, let alone dresses celebrities in it.

“Giveon’s voice was uniquely arresting to me, and then on top of that, there’s an earnestness to the stories he sings about,” says Issa Rae, an early champion of Giveon’s who featured his music on Insecure. “I’m really drawn to storytelling in music, and his first EP, Take Time, drew me in specifically because he was one of very few R&B artists leaning into his voice and what felt like live instruments. He’s not hiding his voice behind overproduced bops.”

“Heartbreak Anniversary” was an unlikely TikTok success story following its release in February 2020. It’s usually ringtone-length, catchphrase-stacked bangers that go viral on the app, and “Heartbreak Anniversary” is a somber ballad about all the ways a breakup can haunt you. Yet its warm groove spoke to a pair of dancers in the Philippines whose light routine of body rolls and handography sparked a dance challenge that spread around the world. “I really watched it go from the Philippines all the way to my little cousins in Long Beach, which was crazy,” says Giveon. “It’s insane to see that there are tools like that.”

Now, Giveon is figuring out what it means to be an old-school R&B heartthrob in the TikTok era. “If you’re an artist starting right now, there’s no such thing as mystery. It just can’t happen anymore,” he says. For all his gratitude about his social media success, he’s also seen how streaming numbers and algorithms often determine what an artist can release, and when. “Artists now have to double as a content creator, which is like, ‘Oh God.’ You know what I mean? Imagine Michael Jackson trying to become Michael Jackson, but he has to be on TikTok. It’s bittersweet.”

Giveon doesn’t want his music to feel like content — he wants it to feel timeless, like “you could just drop it at any decade, and they don’t know when it was made,” he says. We talk about the R&B artists of the ’90s and early 2000s we grew up listening to: Tyrese, Brian McKnight, D’Angelo. (He once covered “Untitled (How Does It Feel)” for Spotify.) He’s striving to be a classic, too. “What I pull from those artists is you have to be sensual in these songs, and I think I have a couple more sweet sensual moments on this project,” he says.

He stops and winces over the potential cheesiness of what he just said. “But not too many,” he adds, smiling, “because I’m not a gushy guy.”

Besides his own, the only other voice you hear on Give or Take is Giveon’s mother’s — “No features,” Giveon is quick to point out — who appears throughout the album offering praise and advice. (“People make mistakes. People don’t always agree with each other. Keep that in mind, Giveon. You hear me, son?”) Give or Take almost plays like a conversation between the two as he navigates the ups and downs of love and loss, and Giveon counts her as one of his closest confidants.

“Especially with the way my life is now, I try to express myself to people who’ve been around,” he says. “There’s nothing wrong with meeting new people and mingling with new people, but telling those deep intimate stories to a brand-new person? I don’t know.”

His mother was also the first one to notice his talent while raising Giveon and his three brothers in Long Beach, California. During high school, he attended a music education program at the Grammy Museum in downtown Los Angeles, where he studied greats like Frank Sinatra. “I don’t think my mom thought it was possible for music to be a career; she just wanted to show off that her kid can sing,” he recalls. “Parents could give you pushback and say, ‘Actually, go this route, because this route [in the arts] is very unrealistic.’ But my mom was very receptive. She’s always been supportive.”

“There’ll be things up for interpretation. I just look at it like it's one big high school, and I ignore it and let it float into the air.”

At the time, even Giveon wasn’t sure a full-fledged music career was possible. After a short stint studying creative writing in college before dropping out, he honed his craft while working as a server at his local Bubba Gump Shrimp Co. “I have no form of nepotism at all. All my family’s just nurses or postmen and things like that,” he says. Quickly, though, he started to make connections in the industry: The first song he ever released, “Garden Kisses,” caught the attention of Canadian producer Sevn Thomas (known for Rihanna’s “Work” and Drake’s “Pop Style”) in 2018, and a year later, Epic Records signed him.

Back then, Giveon admits, he was holding back with his music. Before Give or Take, “I was telling stories before through a vague lens to keep the relatability and multiple perspectives. This time, I was like, ‘I’m just going to speak specifically from my point of view, and if you relate, then that’s great.’”

There’s a diaristic quality to his lyrics, down to the fact that some of his songs have dates for titles. “Dec 11th” calls back to a tour stop in Houston last year — “Pretty brown eyes, I seen you from a mile away / But I was on the stage, so I couldn’t get your name” — and is as aching as any missed-connection tale. And anyone who’s gotten ahead of themselves in early-days romance will see themselves in “July 16th”: “It’s only been fourteen days / And already adore the way you are to me / I wanna ignore and take it slow / ‘Cause I know where this can go / Movin’ too fast, until we crash.”

Still, there’s a limit to what Giveon is willing to give. “One thing I learned from before this album is leaving space for interpretation,” he says. The album’s first single, “For Tonight,” is “really about a taboo relationship, but that could be with a person, that could be with a substance, you know what I mean? And I would hate to just give it all away, so I try to have my specific reasons and then just leave some up for interpretation.”

“Whenever you think Giveon, you associate it with quality and class — that’s what I want to make sure.”

When he released its follow-up single, “Lie Again,” in April, fans speculated it was about one of the singer’s past relationships. (So much so that his ex-girlfriend debunked the myth — and then some.) When I ask him about the social-media scrutiny, his eyes dart to his team nearby — the only time his demeanor really changes in our conversation. “There’ll be things up for interpretation. I just look at it like it’s one big high school, and I ignore it and let it float into the air,” he says. “This is just the beginning of it all. Down the line, there’s going to be even more of whatever that the Internet comes up with. But it just comes with the territory. You can’t try to bash it or anything. You just got to let it take its course.”

Now that Give or Take is out, the grind of being an artist looks quite different than it did two years ago. “It’s definitely a lot more tiring than me just opening my laptop and clicking into meetings on Zoom,” says Giveon. “But it’ll never be as strenuous as my day job before I was making music.” The night that the album dropped, Epic threw a listening party in L.A., followed by a CD signing at a record store in Giveon’s hometown the next day. The appearance was only supposed to take up two hours, but it ended up lasting six because he wanted to speak to every person who came.

“I just try to display quality and class in every moment. Whenever you think Giveon, you associate it with quality and class, even if it’s not at a big moment — that’s what I want to make sure,” he says. “Because eventually, that’s going to carry on. Let’s say in 10 years I want to start making chairs.” Chairs? I look into his eyes, remember he looks up to multi-hyphenates like Virgil Abloh and Frank Ocean, and decide to go with it. “Everyone who knows Giveon will think quality, class, timelessness. They’re going to be like, ‘All right, let me check out what this chair is all about.’”

By the weekend, he was on stage performing at the 2022 BET Awards, but a technical glitch had social media buzzing with memes and hot takes. When I catch up with him a few days later over the phone, he tells me the mic was set in G, while the song was in B. “So no matter, even if I was singing in B, the note would still come out in G, so it clashes to the ear. That’s why I grabbed my ear during the performance.”

Giveon, of course, took it in stride. “It’s not really a big deal to me. I think it was just something to talk about,” he adds. “One thing I will say is, it didn’t hurt knowing that I had a body of work that was released a few days before because it sparked curiosity and you could see it on the back end of everything. So it was a cool moment, honestly.”

That’s been the best part of release week — not the technical difficulties, but seeing people engage with the material. “They’re actually listening to the whole thing straight all the way through,” Giveon says, as if he still can’t quite believe it. “In a world driven by singles and big music videos and pushing one song at a time, it’s exciting to know that I grab people’s attention for 45 minutes.”