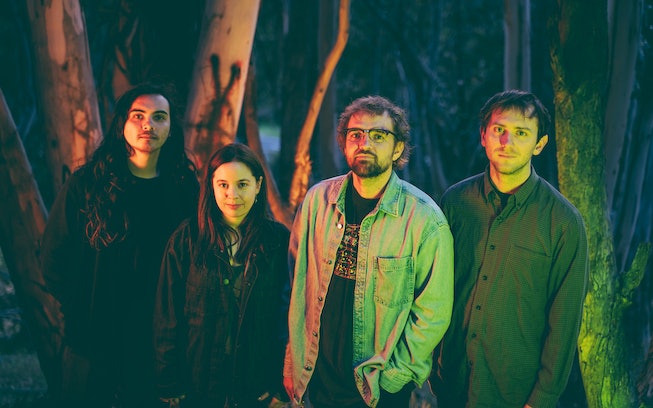 If most songs were to be believed then love is the greatest force on Earth. Even in the face of apocalypse, many a ballad has argued, everything would be OK as long as you had love. If you were to pose the same question to Los Angeles indie rock band Goon, however, they’d likely disagree. The quartet’s latest single, “Emily Says,” premiering on NYLON below, is their version of a love song that’s more in-line with the messiness of reality. Call it a love song for realists: it’s great, but it doesn’t cure everything.

The tender new track is off the band’s forthcoming album, Hour Of Green Evening, out this Friday, and, despite its more lukewarm stance, is actually a very romantic listen. Over melty, wavy guitar, frontman Kenny Becker’s croons conjure up images of sunshine and fertile gardens, to-be sprouts lying in wait in the soil. The realism part, however, barrels in during the second half of its lyrics and through the story of the song’s origins. Written about his wife, Emmy, the track was borne through Becker’s own realization that he still grappled with depression and anxiety despite the love the two shared. In the song’s lyrics, it’s clear he’s still trying to come to terms with the two conflicting but legitimate emotions that take hold of his body. “And though I know in my heart it's right/ Feeling like hurting myself tonight/ Nobody's candle is burning bright,” he sings, to devastating but freeing effect.

“When my wife Emily and I first met, we were swept up in the classic, all-encompassing, giddy, sappy, new romantic intensity,” Becker tells NYLON in an email. “But it also became clear that we still both struggle with our own inherent anxieties and depressive tendencies. And while our love for one another definitely makes things a lot easier, it would never cure us from those things. I was thinking about the conflict between those two truths when I wrote this song.”

In reality, love doesn’t have to save you. It just has to be there to make the darkness not so dark. “Emily Says” is the last single from the group’s new album, a project of vibrant and green-hued pastoral rock. Hear the song below, and read on to learn more about Goon and Hour Of Green Evening.

I’m chillin in my little home studio. Got lots of paintings, synths, tape machines, and a general messiness that always occurs when I’m working on something lol.

Tell us about Hour Of Green Evening; what can people expect from the new album?

I think in many ways it’s the record we’ve always wanted to make. There are lyrical themes and musical concepts that have been present in past Goon works, but are expanded upon and more fully realized here. I also think that 2022 marks a new chapter for the band, and this album feels like a kind of mission statement that we can move forward upon.

Alex Fischer from Spoon plays piano and keys on the project. How did that collab come about?

Our friend Phil Hartunian, who engineered and co-produced the sessions, introduced us to him while we were recording. We were entering that phase where you just keep re-doing takes of the song, and even if you think you’re making progress, you’re actually in a bit of a rut. Alex came along and added a dose of spontaneity and fun back into the sessions. He learned all the songs the same day he recorded them with us, and for the most part all of the first takes we did with him ended up being the ones we kept.

What do envision people doing while listening to the album?

We really wanted to make something that worked both as a solo-listening experience and also a communal one. Listening to it somewhere outside during golden hour I think feels very appropriate! But so does at 3 a.m. in the middle of the night. Any way that people want to listen is good with us!

Goon’s Hour Of Green Evening is out July 15 via Démodé recordings.