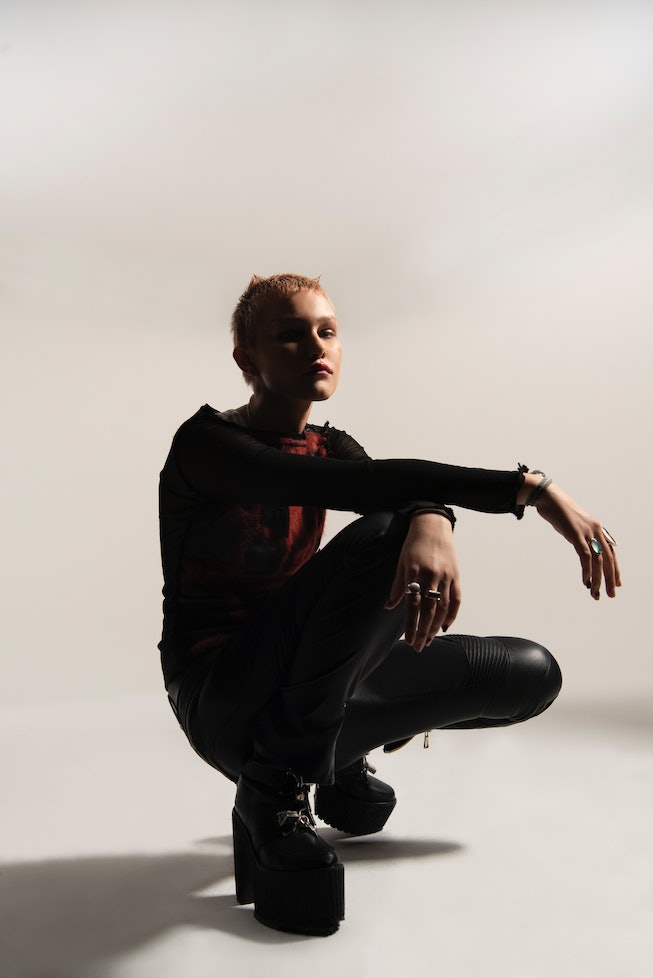 Grace VanderWaal wants me to shave my head — and she wants you to shave yours, too.

“I’m that person now,” she says. “I think everyone should do it.”

Midway through quarantine, the now 17-year-old singer found herself at breakfast with her sister having, as she puts it, the conversation that she's had too many times with other women: Should she shave her head? Every time she’d considered it before, she’d come up with an excuse; it wasn’t right the time, she’d do it in a year, etc. etc. But sitting there that morning, she suddenly had an epiphany. “When guys shave their heads, it’s literally not a big deal,” she realized. “We don’t even talk about it, and it just grows back for them. But we have the same hair, and yet I feel like it’s a much bigger deal for us. But it’s like, why? So that same day, I just went home and I shaved my head.”

She recounts this now over Zoom from her South Carolina bedroom, sporting a close-cropped pixie cut, adorned with a number of mismatched hair clips. She’s growing it out for her role in Disney’s upcoming sequel to the 2020 film Stargirl but is already dreaming of the day when she has the option to shave it all off again. “I could definitely see myself shaving it again, but I never know what I’m going to do,” she says. “So we’ll see what future Grace does.”

For the fanbase that’s been following the singer-songwriter since she won America’s Got Talent at age 12 in 2016, though, shaving her head was a sign that future Grace, or at least Grace in her truest form, has officially arrived. On Friday, she’ll release her first new music since 2019’s EP Letters: Vol. 1, the single “Don’t Assume What You Don’t Know,” a catchy rock jam that sees VanderWaal trading in her signature ukulele for an electric bass. The music video, also out Friday, depicts a similarly edgy VanderWaal, her buzzcut fashioned into makeshift devil horns, in full-on rock star mode.

VanderWaal originally wrote its lyrics, which tell the story of a young person navigating the industry in Hollywood, as part of a writing session over a year ago. It was put on the back burner at first, but VanderWaal knew it was something special — after all, it was a topic she knew well. “The song is all about the fantasies of Hollywood and how I’ve personally witnessed the debunking of all those myths,” she explains. “People put fame and beauty on such a pedestal, as if that’s the answer to life and all of that. I want people to take away [from the song] that your life is awesome, and my life is awesome, and everyone just makes the best of what they have and can find their happy sh*t in their own sh*t.”

From the get-go, the song had a more rock-leaning sound than any of her prior music; her newfound love for punk — and, in some sense, its aesthetic — followed. “It was rock from the beginning, which was very shocking because I wasn’t even really into alternative or rock at that time. And it just pooped out that way, which is so weird,” she says. “Then during this break, I got so into [rock]. ... I was subconsciously already gravitating toward it. And so then I started consciously really liking it. I’m really into Black Flag.”

Days away from the song’s release, she’s aware that the new music direction may be a bit of a shock to her fans; she got firsthand experience when she posted a picture of her new look, shaved head and all, on TikTok. Immediately, her comments were flooded with people asking, essentially, “Is Grace OK???” “I am very smart and I usually know what things are going to make people talk or grasp attention, but that I didn’t expect in the slightest,” she says. “I realized the world is so much more sexist than I thought. People jump to mad conclusions for a woman having short hair, like ‘[she’s having a] mental breakdown or on drugs.’ What does that say about us?” While she was taken aback by the response, she wasn’t mad. If anything, it just lit the fire that much more. “It exhilarated me,” she says. “Lately, I don’t know what’s going on in my brain or what happened to me, but all of a sudden, I like to make people uncomfortable, and I want people to ask themselves why they’re uncomfortable with whatever I’m doing.

“I actually think that’s why I really like punk music; they’re doing things to make people uncomfortable,” she continues. “I want this whole project to just be about just completely unapologetic self-expression. If you’re uncomfortable, screw you. That’s your own sh*t to work through.”

“People jump to mad conclusions for a woman having short hair, like, ‘[she’s having a] mental breakdown or on drugs.’ What does that say about us?”

To reiterate: This is no “Disney girl gone bad” or “starlet gone off the rails” tabloid moment. This is simply a young woman — who’s happened to have been in the spotlight for the past few years — growing up and into who she is. “Physically, I feel like I’m being more honest and myself than ever,” she says. “That’s coming out in my fashion and how I give interviews, but most importantly, my music. I don’t think anything was holding me back before; I think I was just simply young.” Lately, she’s been reflecting on what it means to have to “present yourself,” especially as a female in the public eye. “I was raised to present yourself ‘well’. That was such an ingrained value that one day I was just like, ‘That doesn’t mean sh*t.’ I haven’t looked back since.” Presenting yourself as your most honest self, she realized, is “h*lla more respectable.”

“These are the things that I want to bring up and talk about,” she continues. “Things like ‘respecting young women in the public eye’ — it’s like, what does that respect really mean? What are we really respecting? Core values? Core values shouldn’t be about putting on a costume to please the public eye. That’s a terrible core value. It should be about honesty and living your truest life in happiness and being a good person and saying good messages and speaking up for what you believe in.” With this new music, she feels like she’s doing that, and in turn, has more control over her art than ever — “because I’ve taken the control,” she clarifies. “I knew how special this was, especially with the recent buzz about me, negative or positive, whatever. I don’t care. It’s a special project. I really did not want it to go wrong.” At this point, she’s ready for it to be out in the world, critics be damned. “New and fresh comes with negativity and positivity,” she says. “I’ll take that bullet. I will gladly sacrifice that.”

Following the single’s release, she hopes to continue down this new musical path. In a few months, she’ll start filming the sequel to last year’s Stargirl. Acting isn’t on the forefront of her mind right now, but she’s still down for projects that seem “one of a kind.” She eventually wants to produce and co-write music for other artists. She also has aspirations of one day being a “runway model,” as well as a “kooky middle-school teacher.” But if anything, this new phase of music is the first step in achieving her ultimate career goal: “rock star.”

She recalls a music festival years ago, when she was opening for Imagine Dragons, when she was 14, and watching a “really old rock band” from the side stage with her dad. She can’t remember which band it was (only that they had “British-y” vibes, and that it’s “so painful to people that I don’t know their name right now because they were apparently very iconic and amazing”), but the effect they had on her, rocking out in all their glory all these years into their career, was immediate and lasting. “My eyes just grew bigger as I watched them,” she says. “I looked at my dad and I was like, ‘That’s going to be me.’”