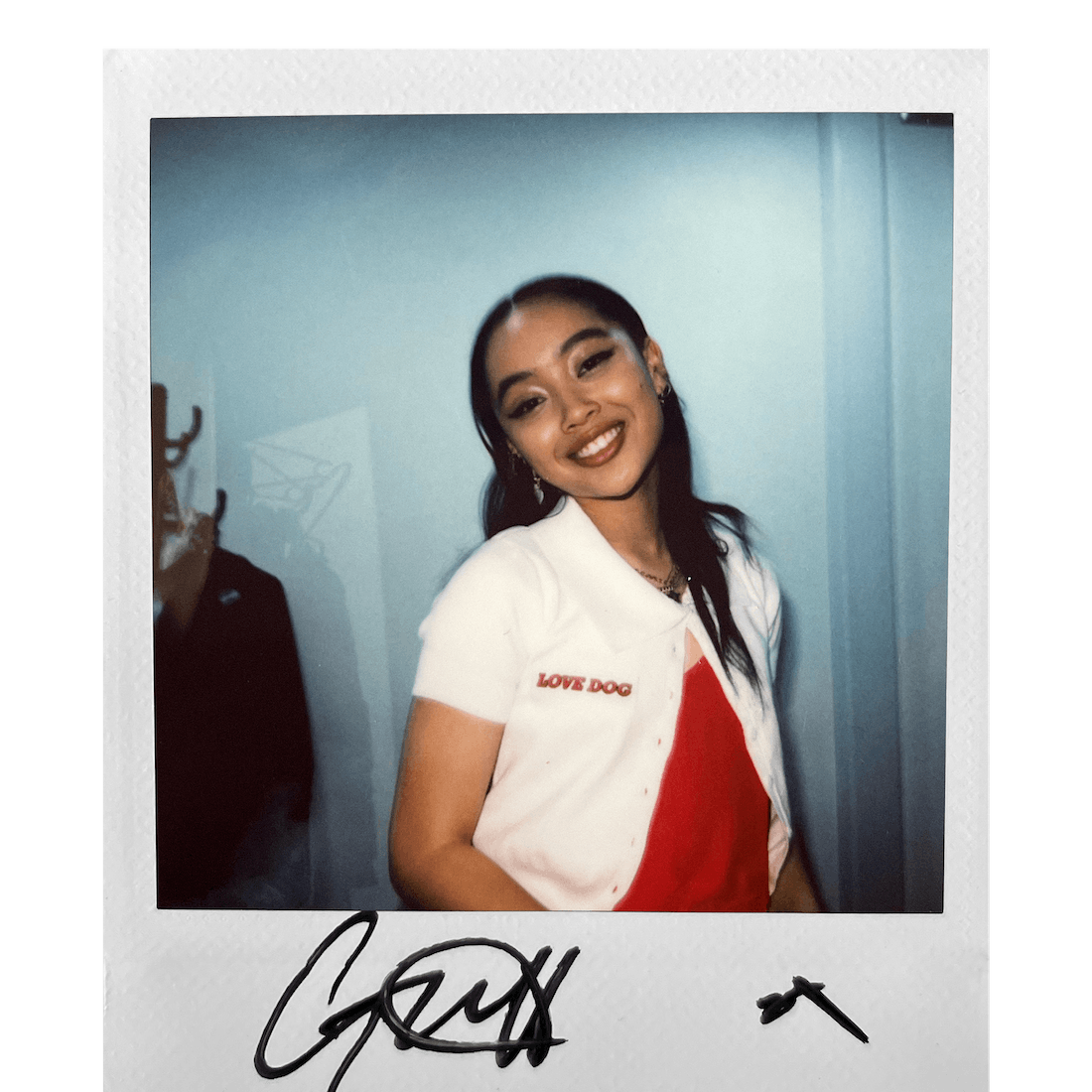 Griff On Her Breakthrough Mixtape, Writing Honestly, And Eating Fries With Taylor Swift

The U.K. singer-songrwriter breaks out with "One Foot In Front of the Other."

Sarah Griffiths, the 20-year-old singer better known as Griff, opens the conversation with an apology. “Sorry if I keep looking away,” she says, “but I think Robert Pattinson is sitting across from me.” The singer is Zooming from a local park near her home in London, and she’s spotted someone who eerily resembles the Twilight actor, who also happens to live in the area. She glances over again. “Nah, I don’t actually think it’s him.”

It’s a rare perfect weather day in England and an even rarer quiet day for the singer-songwriter, making this trip to the park practically required. When we speak in early June, Griff is only a few weeks out from dropping her debut mixtape, One Foot in Front of the Other. Released on June 18, the EP features seven breakthrough songs written by the singer over the course of the past year. “Honestly, I’ve heard the songs so many times I’ve lost track as to whether they’re good or whether they’re bad or what,” she admits. “I’m excited for it to just finally be out in the world. I’ve written them basically just by myself, locked down in my music room, in such a moment of solitude, so it’s been quite a private process. It’s going to be quite weird finally getting it out in the world, but I’m excited.”

Born in Kings Langley, England, Griff has had music as a major part of her life since her earliest memories of hearing the local church choir. At 15, she started to write her own music, working with any local producers who would meet with her. “It was a bit of a slog because you’d just always be with a new person every day and some of them were good, some of them were really sh*t, and you kind of climb your way up,” she recalls. “I guess that’s how I started networking a bit, but I don’t know that I thought that... I was still in school when I was doing this, so I didn’t actually believe I would ever pursue it as a career.” At 18, she signed a deal with Warner Records, releasing her debut single, “Mirror Talk,” on the same day. “Suddenly it felt like things were real; I was like, ‘Oh, OK, sh*t, maybe this is actually a possibility.’”

Griff’s sound, she explains, is inspired by “really strong pop females,” including Lorde, Taylor Swift, and Banks — influences you can hear on her mixtape, perhaps best on the EP’s catchy and deceptively sinuous title track. Like Swift, Griff considers herself a songwriter first, another fact evident in the wide range of emotions on display over just seven tracks. “I’m just a young girl trying to figure out life, and I’d say it’s uplifting and heartbreaking [at] moments,” she says. “Overall, I’d say it’s quite emotional to listen to. I hope there are moments in each of the songs where I can hit home for each person.

“All of the content and the online and the being on camera all the time, that’s not my natural habitat,” she continues. “My natural place is writing songs, and this year, I’ve realized so much more of being a musician now isn’t about writing songs. It’s hard to strike that balance, but I guess it ended up being me as an artist, which has been the best thing ever.”

Her biggest arrival as Griff, the artist, came earlier this summer at the 2021 Brit Awards, where she performed her song “Black Hole” and took home the Brit Award for Rising Star. Dressed in a custom 3D Susan Fang dress with a matching headpiece that was more akin to a chandelier than traditional topper, it was hard to deny that it was indeed a star-making moment. “What I loved about that was it was, on one hand, really bold and really obnoxious, like, ‘For f*ck’s sake, just wear a normal dress. Why are you wearing a whole lampshade?’” she says. “But then on the other hand, it did feel like quite a shy and reserved thing to do because I was behind something and there was a barrier between me and everyone else. I liked the mood of it all. I think it was dramatic but also not too serious.”

The event marked not only her first red carpet but her first TV performance — which happened to also be her second live performance ever, following a pre-COVID show with “about 200 people.” “Just the idea of being on a lineup with the most famous people in the world, like The Weeknd, Dua Lipa, Coldplay…” she says. “I was so aware that I was the smallest artist and definitely had the smallest budget and wouldn’t have all the bells and whistles and whatever and no one would know who I was. But even though I was like, ‘I’m not in the league of The Weeknd,’ somehow I’m still competitive, and I’m like, ‘I want to be really good and I want to be on par with him.’”

Between what would end up being a stunning performance and the headline-making red carpet look, those who didn’t know Griff prior to the show’s broadcast certainly did after — thanks in part to an Instagram photo posted by Taylor Swift of the two meeting backstage, bonding over a basket of fries. “It was wild,” she recalls. “That moment went by so quickly. I was about to leave and she was like, ‘Do you want a picture?’ And I was like, ‘Oh my God, sh*t, yeah, of course I want a picture.’ How was I about to leave from seeing Taylor Swift and not document the moment?” The fries were an impromptu prop. “It was definitely weird to see her [in person] because you see her on so many screens and then you’re looking at her face moving, in the flesh. I wasn’t in the conversation. I was like, ‘Right, yeah, your skin is immaculate.’ Obviously, I wasn’t saying that out loud.

“She’s probably one of the No. 1 people that I look up to in terms of being a songwriter and being a top female in the music industry and being so consistent and coming back, time after time after time, with incredible songs,” she continues. “I even said that to her. I was like, ‘You do realize there’s this now a new wave of young pop musicians that you can hear Taylor Swift in their writing and you can tell that they’re Taylor Swift fans.’ And she was like, ‘That means so much because for so long, no one gave a crap about what we were doing.’”

As she prepares for a headlining tour of her own in the fall, it’s likely that Griff herself will have many more of these fangirl interactions, but this time, with her on the receiving end of the conversation. She’ll just have to wrap her mind around it first. “Now that things are opening up, as I walk around, the odd person will be like, ‘Hi, Griff!’” she says. “I’ll be like, ‘Oh, my God! Hi.’ And obviously my name is Sarah as well, so I’m like, ‘Who’s Griff? Oh, that’s me! Hi.’ It’s a weird feeling, like it’s coming to life and that people are recognizing what I’m doing and it’s out in the public.

“I try not to think about the division between the two because I think you’ll just end up trapping yourself if you’re trying to be a different person on stage than you are in real life and on social media and what not. If anything, I think when I’m Griff it’s just more elevated. I can get away with wearing a stupid big dress or a huge f*cking headpiece… Obviously I’m not going to do this now, sitting in the park in London,” she says with a laugh. “But when I’m Griff, I guess you can get away with doing crazy sh*t.”