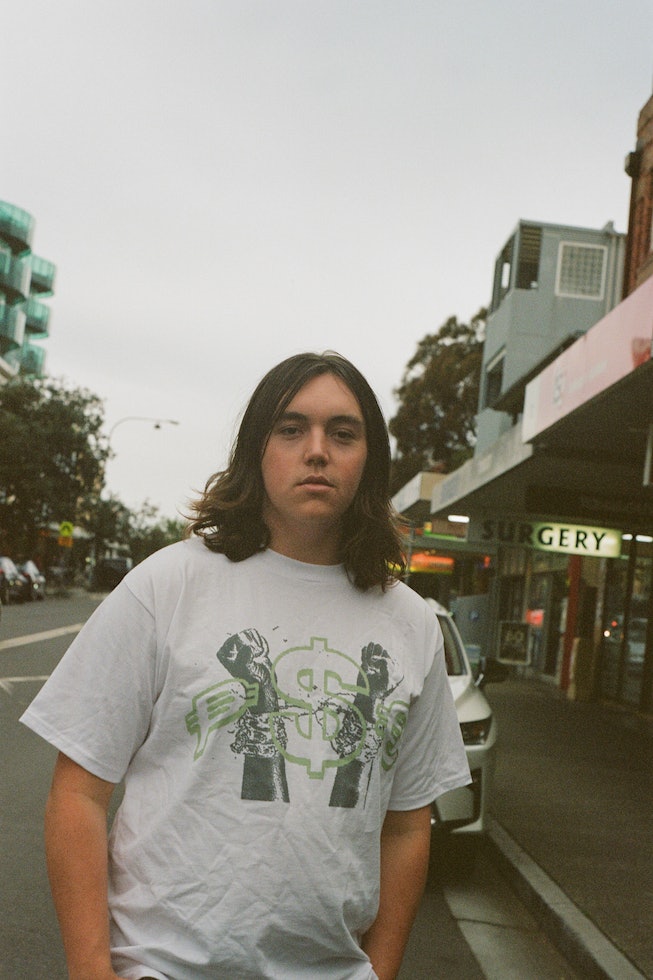 Hal Cumpston almost can't believe his luck. At 21-years-old, the Australia actor landed his first American gig as Silas in the latest installment of the wildly popular The Walking Dead franchise, The Walking Dead: World Beyond. "Although I felt a bit like an imposter," he tells NYLON of landing the show, "It was such a cool situation I’d bluffed myself into. Like what? Such a cool job."

While the original series about the aftermath of a zombie apocalypse spanned ten seasons, World Beyond has already been confirmed to be self-contained to just two, focusing on the first generation to be raised under the zombie apocalypse that's plagued the TWD universe for so long. As Silas, Cumpston portrays one such teen making his way through an eerily familiar world changed forever by the outcome of a global pandemic. With season one wrapped just before COVID-19 hit, World Beyond is now airing on AMC and available to watch on Amazon Prime. Cumpston talked to NYLON after the series premiere about where he's from, his first project, Bilched, and what's on the horizon.

Where are you from and how did you get your start in acting?

I am from Sydney, Australia and had lived there for the first 20 years of my life before landing The Walking Dead gig. I’m very new to the game as I had only just finished my first project, Bilched (Aussie teen comedy feature film), a few weeks before The Walking Dead: World Beyond. Bilched began when I wrote the first draft in 10 days just after finishing high school. After that, I worked like crazy and somehow 12 months later, we were on set filming the thing. It was an insanely chaotic but great experience to throw myself into the deep end at such a young age as a producer, writer and lead actor. All of which I had never done before. I was convinced the movie was going to be a piece of shit, but it got released nationally here in Australia and people seemed to like it, thank god!

What’s your favorite project you’ve worked on so far?

Although Bilched was my baby, it was a much smoother ride filming The Walking Dead: World Beyond. It was also my first American audition so anything after that was just fucking awesome. Although I felt a bit like an imposter, it was such a cool situation I’d bluffed myself into. Like what? Such a cool job.

Were you a fan of the first iteration of The Walking Dead?

Not until getting to the audition process did I watch the show. As you can imagine, it was a super fun binging session made even better when I found out I was in the franchise.

The Walking Dead is especially eerie given what the world is going through. Do you see parallels between your character Silas’ experience and the current pandemic we’re in? Obviously one is a zombie apocalypse.

Yes, well hopefully it means people are keen on more apocalyptic world content. Luckily in this pandemic, I get to play the character of myself as opposed to Silas. And yes, luckily again, there isn’t the threat of zombies in our world just yet.

What is it like to be a part of such a beloved franchise?

Everything about it is so unbelievably cool. Usually you go through a bunch of boring roles at the beginning of your career, but The Walking Dead is anything but boring. I’m so bloody lucky and happy to be a part of it. I can’t wait to go to San Diego Comic Con once COVID comes to a conclusion.

What can we look forward to seeing you in next/or what other creative projects are you working on these days?

We are hopeful for a season two of the show, so that would be sick to get back into as it’s been a while. As for writing, I’m in the latter stages of cleaning up a first draft of a new film that is hilarious. I’ve also got another show here in Australia which I unfortunately can’t talk about just yet, but it’s super exciting. So yeah, finally have some stuff to do during a very slow COVID year.

Catch The Walking Dead: World Beyond on AMC and Amazon Prime.