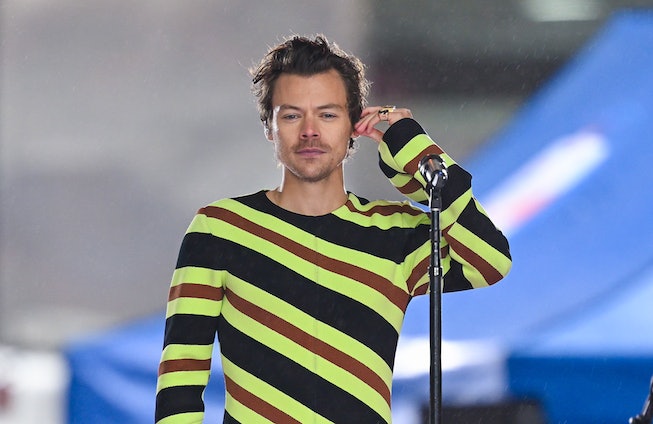 Harry Styles concerts are always an intimate experience. Throughout the years, the former One Direction star has helped fans celebrate birthdays and impromptu proposals, all while performing his heart out. This past weekend, Styles upped the ante by helping one lucky concert-goer come out in the most celebratory way possible.

On Sunday night, Styles noticed a fan waving a large sign during his concert at London’s Wembley Stadium. The note read, “From Ono to Wembley: Help me come out.” After processing the fan's request, Styles promptly grabbed the sign and a pride flag from the crowd and made a heartwarming announcement.

“So you would like the people of Wembley to bring you out,” Styles said. With the crowd cheering in the background, the singer crafted a quick ceremony to celebrate the news. “When this flag goes above my head you’re officially out,” he explained. “I think that’s how it works.”

“When this sign goes over the head, you’re officially gay my boy,” he continued to the crowd's delight. Styles then ran across the stage, waving the flag, teasing the audience as his band played a drumroll. As seen in a fan-captured video, the singer lifted the flag halfway then dropped it back down and joked, “No, still straight,” before running back to center stage. Finally, as the crowd chanted the fan's name, Styles lifted the flag over his head and said, “Congratulations ... you’re a free man,” before tossing it back into the crowd.

Styles is currently traveling the world for his ‘Love On Tour’ concert series. Sunday night’s performance was his second show in London. After performing on June 18th the singer tweeted, “Wembley, last night was one of my favourite shows we’ve ever played. I don’t know where to begin thanking you, I’m completely overwhelmed. I’m so grateful, I’m so happy. Thank you, Thank you. I love you all. See you later. H”

The “As It Was” singer's next set of concerts are in Ireland, Germany, Sweden, Norway, and Denmark. Later this summer he’ll return to the US for a 15-night long stay in New York and Los Angeles. Stay tuned for more exciting moments from Styles, as his Love On Tour series continues.