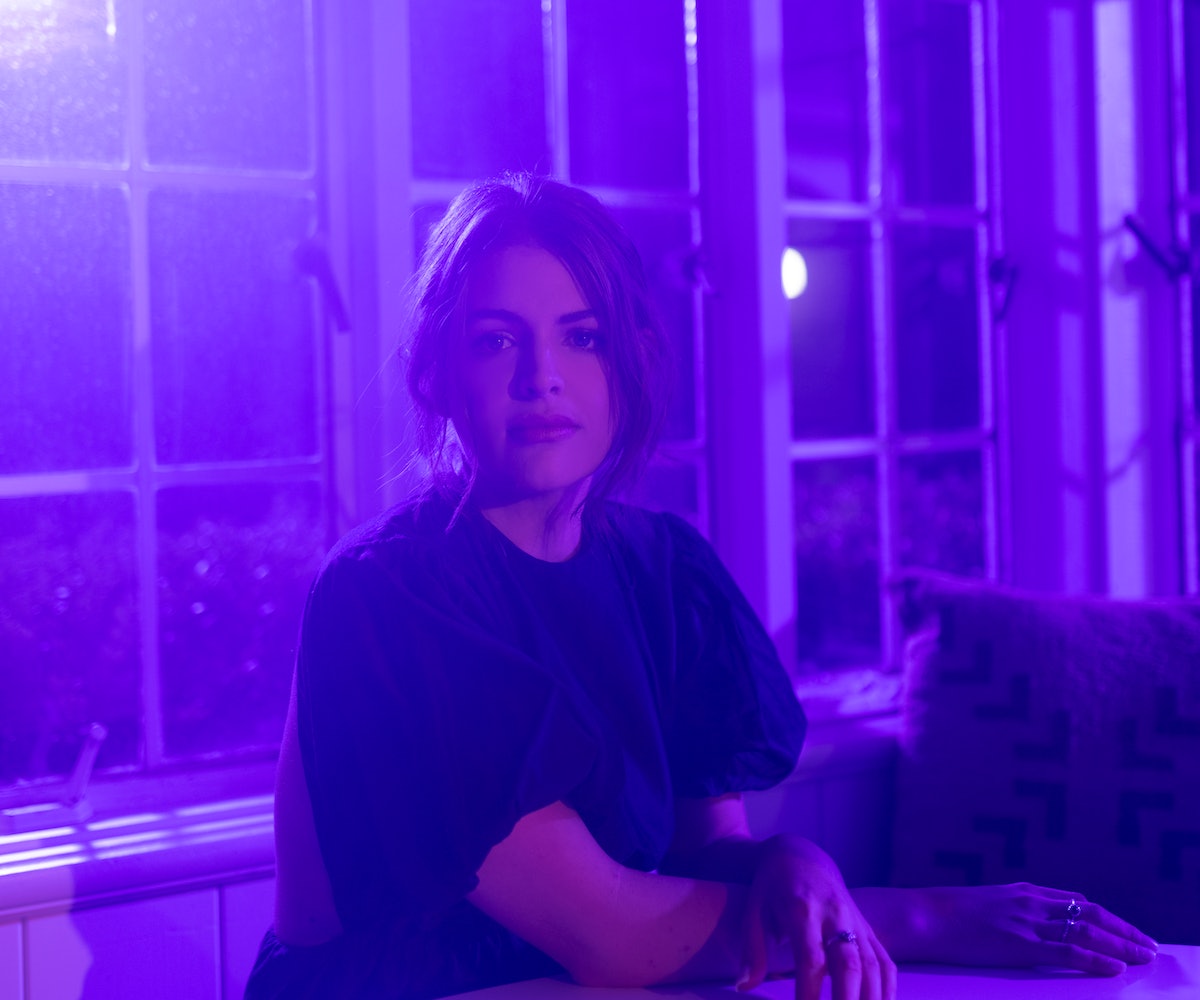 Indy Yelich O’Connor is missing New York City. When the 23-year-old Kiwi native blinks onto Zoom on a recent afternoon, she’s backlit by the glow of a sunny winter’s day in New Zealand, but her mind is still on the city she considers home. “I’m so jealous that you’re in New York,” she tells me right off the bat. “I’m just here [in New Zealand] to kind of… while this release is happening.”

She’s referring to the arrival of her first-ever song, “Threads,” out Thursday, Sept. 15 under her new moniker, Indy. There was perhaps good reason for the New York transplant to want to dodge its release in the familiarity of her hometown — she is Lorde’s little sister, after all — but right now, the overwhelming emotion she’s feeling is a sense of relief. “I'm just really ready,” she says. “I feel like I've lived with that song for so long, and I'm just happy to have it out. I'm so excited.”

Besides her pop star connections, the world came to know Indy first as a poet. A self-proclaimed “writer, first and foremost,” she published her first book of poetry, Sticky Notes, in 2018, and followed that up with her second, Dudette, in March 2022. But she’s been writing songs for much longer than that. Growing up with musical and writerly parents, Indy cites her childhood listening to Annie Lennox and James Taylor and singing in the car as what led her to pen her first song when she was just seven years old. After graduating high school — in between stints in L.A. to be an actress and NYC where she largely focused on her poetry — she slowly took up the mantle of songwriting again, this time with much more assurance in herself.

“I just feel a lot more confident in my identity,” she says. “I definitely owe a lot of that to New York. I feel like 23, you know who you are a lot more than 20.”

She cites her time in the city as profoundly formative. Indeed, the story behind “Threads” stems from an extremely NYC experience: “winter in New York, bar-hopping with friends. It's kind of the slight chaos of how a night could unfold, to me, and then it's the toxic, messy miscommunication.”

“Do you know Yuca Bar in Alphabet city?” she asks me. “I've had their frozen margaritas and just been walking around the city being like, ‘Oh, my god,’ and just in love with everything or crying or something.”

Like the powerful emotions of being in your early twenties Lorde’s pop songs can churn up, Indy’s “Threads” also excels at translating that desperate, yearning chaos of adolescence. The glowing and strobing pop song, anchored by her robust voice which sounds uncannily like her sister’s, is built on vivid imagery that reflects her poetry roots. “I’ve been entranced by other bodies/ And the stories before/ Cold conversations turn to flames/ All tangled up on the floor,” goes one captivating verse from the song.

Produced by Josh Grant and co-written by Lizzy Land, “Threads” is the lead single off a forthcoming EP, a project that will surely prove the songwriting bug can bite two siblings just as potently. For Indy, its release is just the beginning of a world of possibility, even if she’s keeping her goals small for now. “I just want people to listen to it in their cars,” she says. “And maybe that feeling can hit you, of what I've been trying to depict.”

Tell me a little bit about your time in New York. It seems like it was a very formative place for you. Is that kind of where you felt your curiosity to start writing music?

I live in the East Village and New York City, the culture every day is such a pulp. And I was just really, really inspired by the history of it. My favorite poets are all from New York. The '60s, the '80s, Alex Demetra, Frank O'Hara. That kind of history. Patty Smith. I just fell in love with the history of New York in the '80s. And honestly, the crazy thing is like a bar in the '80s is still around, so you can still go, and you can still feel that experience, and you can still feel young and hungry even in a very digital, modern world. I feel like I needed to be in a big city to slow down, personally, since moving to New York at 18.

Do you feel like songwriting and poetry trigger different parts of your creative brain?

Totally. Well, honestly, I'm a writer first and foremost. I love to read. But poetry and storytelling was always the first thing for me. And then I guess I just progressed because songwriting is a form of storytelling. It's just different mediums. But writing poetry is so free. You can kind of get out what you're trying to say, but songwriting is a bit more specific. I had to learn, honestly, how to write a pop song. Poetry is so different. You've got the feeling, and I can write a banging chorus, but it took me ages to figure out just the actual indie pop sound. I think that poetry and free writing really, really helped me with how to eventually form a cohesive song. That really was the best thing I could have done because it's just like a poem.

In a previous interview of yours, you mentioned that your sister, Lorde, helped you find your voice. While you've been developing your songwriting and writing music, did you ever talk to your sister at all?

Honestly, we're sisters; I steal all her really good clothes when we go out to dinner. But having an older sister in the music industry really helped provide me with some really good advice. The main thing that I kind of felt was to forge my own path. We are different entities. If anything, it's really helpful to have someone who is in the music industry who can help you and support you with advice. But the main thing is to just be true to yourself, and I really wanted to forge my own path because I feel like I'm so young and hungry with what I want to say. If anything, it's a great help to me. It's a benefit. I'm really lucky.

“I really wanted to forge my own path because I feel like I'm so young and hungry with what I want to say.”

Who are some other mentors that you feel really helped you find your way to your musical identity now?

My EP ... I've worked with a few people. I would have to give a massive shoutout to this guy, Dave Longstreth. He's from Dirty Projectors, and he did some of the Kanye [album]. He's amazing. And this other guy, Miro Mackie. I think he's an engineer for St. Vincent, if I'm correct. He is a Kiwi guy, and we worked on a lot of stuff together, and that was really helpful having another Kiwi who knew the story of what it's like from suburbia to a big city. He was amazing.

And then I wrote ... Oh, I shouldn't ... I'm spilling the tea of the things. I wrote a specific song, I'll just say, with this amazing songwriter called Kasey Smith. She was so helpful in terms of ... I brought a crazy big poem to her, and she said, "Okay, this is how we're going to structure it. And I was sitting on the floor playing piano, and she was helping me just form. That was a major point in my life. I've been with some real Gs, honestly.

Did you always know that you would want to make music that has a pop sound? Were you ever thinking about any other genres?

I would say that the ‘80s pop influence has always been really important in my life. I've always been a fan of Madonna, Tears For Fears, even Caroline Polachek. People like that. Holly Humberstone. I love all kinds of different types of music. And I actually feel like, on this EP, I wanted to straight off the bat different styles. Whilst everything is kind of upbeat, fast paced, I wanted to try a ballad. I wanted to try a ‘70s banger because, whilst pop influence is such a main thing in my life, my music taste is scattered. Pop influence but maybe a little bit left leaning. Maybe more indie pop.

You have your poetry career, and now you're starting this musical journey. Do you envision a pop star life? When you think about your life five or 10 years from now, what do you envision for yourself?

Honestly, it's hard to know because I've been living with these songs on the subway, Citi biking, and my friends' cars for so many years that it's hard to think about the future because I'm so focused on a world that I've created now. But I love people. I love interviews. I love photo shoots. I just find it really fun. And it's really fun to ... When you've got a product, or you've got a project that you love and you believe in and that you created, who knows what the future holds? But I mean, hell yeah. But also, I really try to live in the moment of this project as well and just congratulate myself for finally getting a song out that I really believe in.

Is there anything you can tell us about your EP?

Okay. I can say a few things, and I don't know if I'm allowed to, but I'm going to say it anyway. Well, this EP kind of pays homage to the sounds I've heard my whole life. The themes of the EP are moving from suburbia to a big city, love and loss, the gritty early 20s kind of thing. I'm honestly just really excited for ... I truly feel like each song might have a different sound. And so, hopefully, if one person can maybe relate to just one song, that's great. I feel really happy that I tried a lot of stuff. I just thought, f*ck it. Try it.

Indy’s “Threads” is out now.