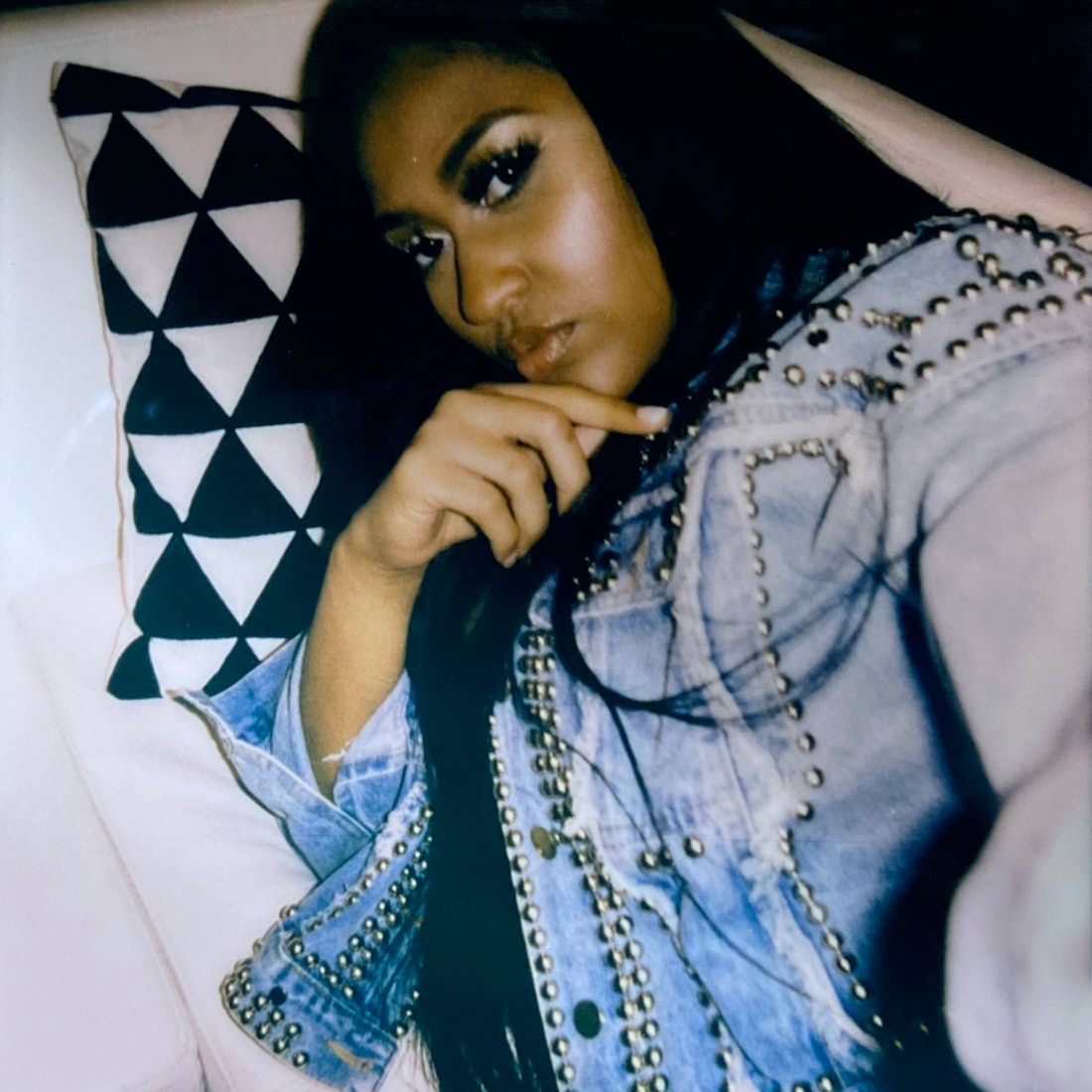 It’s been said that you can’t fully experience a Jazmine Sullivan song until you witness it performed live. Though the world is still in the midst of a global pandemic, Sullivan’s fans were able to experience a few songs from her new EP, Heaux Tales, semi-live — via her NPR Tiny Desk at-home performance. Accompanied by a band and standing against a makeshift brown backdrop the same shade as her earth-toned coat, the elusive, Grammy Award-winning singer crooned her way through five tales of heartbreak, loss, and greener pastures, each one more arresting than the last.

A few days earlier, Sullivan, 33, appears on Zoom in a yellow beanie and with big, black-framed sunglasses shielding her eyes. She’s broadcasting live from her home in Philadelphia; the living room behind her, which is currently functioning as her studio, is sunny and bright. “I have a little bit of anxiety because of the project dropping tomorrow,” she admits right off the bat.

Given the circumstances of the world, she’s thinking about how she can best preserve the parts of her art that make it the magic it is — like her live performances. “I feel like when you hear them on the record, there’s a difference from hearing it that way and then hearing it live,” she says. “And people appreciate both.”

In many ways, Sullivan is an artist’s artist. Since her debut album, Fearless, dropped in 2008 — arriving alongside her breakout hit “Bust Your Windows,” which got big enough to be covered on Glee — Sullivan has become a beloved figure in R&B, a singer with a voice that could bring light to the difficult truths living within all of us. She reappears every few years to deliver a fully formed body of work and tour it for a short while, and then disappears back into the folds of her private life, unconcerned with all the add-ons that now define contemporary celebrity. It wouldn’t be a stretch to say her MO of letting the music do the talking has elevated her to Frank Ocean levels of intrigue — indeed, in 2016, she provided background vocals for Ocean’s Blonde and Endless records.

It’s no surprise, then, that Heaux Tales, her first full project since 2015, was announced at the end of August without any preluding fanfare. She released her first single in more than five years, “Lost One,” an acoustic and quietly devastating ballad about the ones that got away. Those in the know on Twitter, from H.E.R. to critic Hanif Abdurraqib, went into a tizzy: She was finally back, and ready to spill some truth.

The past six years, in reality, have been “mad regular,” Sullivan says. She’s moved around, gone through heartbreak, experienced new love, and the mundane ups and downs of a relationship. The inception of Heaux Tales could even be boiled down to fulfilling contractual obligations. Back in 2018, RCA CEO Peter Edge and her A&R began inquiring what she had in mind for her next project. With Sullivan unsure of doing an album at the time, they suggested something a little conceptual — “so that’s where the idea for Heaux Tales started,” she says.

For the next two years, while battling bouts of both writer’s and singer’s block, she pulled ideas from the one thing she had been experiencing consistently for the past six years, and, really, her entire life: the conversations she was having with the women around her. As such, that’s how Heaux Tales is organized and unfolds — alternating between a guest voice memo from her friends and song, the former providing context for the latter; the sermon, followed by the praise set.

“A lot of the things that I've gone through and gotten through in my life, I owe it to the women that have surrounded me,” she says of her decision to include outside voices on the record. “Just having a group of great women around you makes you better.”

Though they are not her own stories, Sullivan embodies each tale on the project. On “Put It Down,” perhaps the filthiest song Sullivan’s tackled, she expounds her love for the “D” as wholeheartedly and solemnly as Ari Lennox preaches in her interlude: “That d*ck spoke life into me, invigoration, blessings, and soul…” While her anguished and raw performance of “Lost One” adds a visceral and tangible dimension to the fiancé(e)s-to-strangers story her friend Rashida tells in the corresponding interlude.

For those who’ve been following Sullivan since the beginning — watching the 21-year-old Jazmine take a bat to the windows of a car while wailing about infidelity — Heaux Tales also feels like a culmination of sorts, a clear distillation of her decades-long career spent studying the complexities of the human condition in love, or otherwise, and then spitting it back to us in searing clarity. (“B*tch, get it together, b*tch!” goes a memorable line on intro “Bodies.”) From getting to hear the original seed of an idea and then the finished product, one gets an illuminating peek into the workings of Sullivan’s mind — one that seems to be forever finding new things to unearth about how people relate to one another.

For Sullivan, most of that work will be done privately, in the interiors of her own life, until she can land those few golden nuggets of wisdom to share with the world. Unlike many contemporary figures in music these days, Sullivan’s role as a musician is just that and nothing more. “I think I'm from the old school,” she explains. “I like my privacy and the thought of people knowing every little detail about me scares the hell out of me.”

“My biggest goal in life more than anything is just to be happy,” she continues. “And so I feel like the less people know and the more that I hold dear to my heart will keep me the happiest that I can be. I could do more and I probably will at some point be a little more open. But also, I feel like I'm super open in my music, and so I feel like that's where you get to know me, or you know who I am, is through my music.”