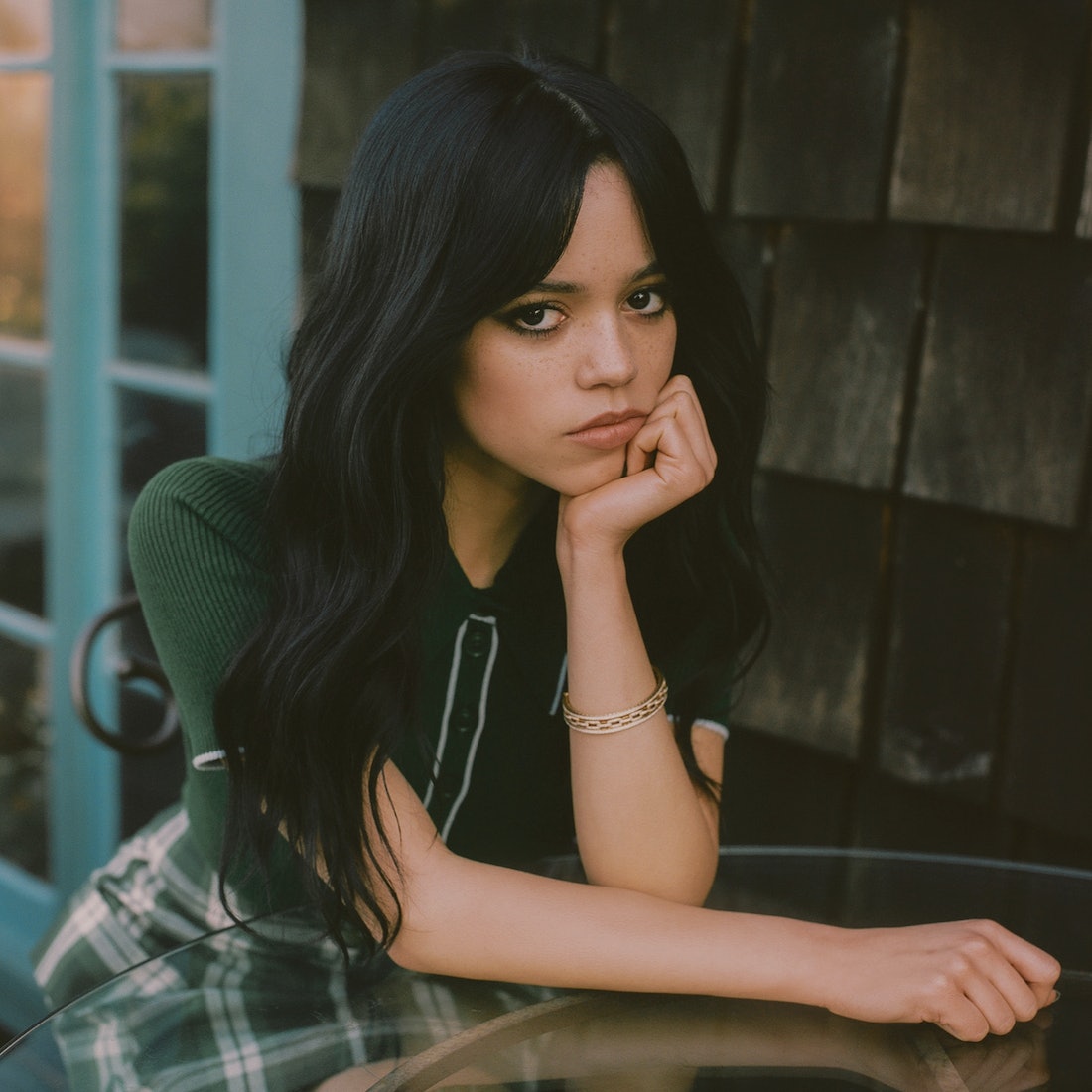 With 'Scream' and a starring role as Wednesday Addams, none is slated to have a bigger 2022 than Jenna Ortega.

Since the trailer for the highly anticipated fifth installment of Scream first dropped in mid-October, over 1.2 million people have tuned in to check out the return of Ghostface. This means that over 1.2 million people have seen Jenna Ortega pick up that fateful phone call — presumably, the one that kicks off each film, ending in a character’s gory demise. Basically, once you hear “Would you like to play a game?” it’s, well, game over. But neither I, beholden to a strict spoiler embargo, nor Ortega, beholden to anxiety over spilling script secrets, is going to share whether what you see is what you’re actually going to get.

“I’ve never been so scared to say something I shouldn’t,” Ortega says. “I feel like anything that I say gets twisted and turned into something that it’s not. I’ve done interviews where I think I’ve played it really safe and smart, and honestly have said nothing, but people think I gave away something major... and they start to make you believe that, like, ‘Oh man, maybe I did.’”

Scream is just the first of many (many) projects coming up for the actor in 2022. On the first Thursday in January, she’s having a rare quiet day, but only because she has to: She’s currently in mandatory isolation after arriving back in Romania, where she is filming Tim Burton’s upcoming Wednesday Addams series for Netflix, having spent the holidays back at home in California. “It’s nice to be back,” she says of her temporary home (prior to the holidays, she’d been there for four months). “Before I left it was unbearably cold. You would walk outside and your hands would burn. And it’s actually really beautiful weather right now. It feels like LA.”

Her temporary residence finds Ortega, 19, some 6,000-plus miles from her hometown of Coachella Valley. The fourth of six children, Ortega first caught the acting bug when she was 6, after watching Man on Fire, a film starring Denzel Washington and a young Dakota Fanning. “I told my mom that I wanted to be the Puerto Rican version of Dakota Fanning,” Ortega recalls. Thus ensued four years of “begging nonstop” before her mother — mostly jokingly, in true mom fashion — posted a video of Ortega doing a dramatic monologue on Facebook. The caption: “my little drama queen.”

Unbeknownst to her, a friend of friend was a casting director who saw the clip and encouraged her to have Ortega come in for a meeting. “It was a direct offer that my mom had accidentally gotten herself into, so I think she felt really bad if she didn’t actually at least let me try,” Ortega says now. “It’s entirely her fault.”

For the first year, she was encouraged to only audition for commercials as a way to dip her toe into the waters. Within that time period, she booked 12 national campaigns — including a slot as the coveted “McNuggets girl” in a McDonald’s spot. “I had done three McDonald’s commercials. Two of them I was the apple girl, which is fine,” she says. “But if you’re around McDonald’s and you’re 9 years old, you don’t want to be eating the apples. The last McDonald’s commercial I did, I was assigned to be the nugget girl. And that was the greatest, the greatest day. I just had to eat nuggets all day.”

Having nabbed the ultimate role, it was time to graduate to the next step. By her 11th birthday, she’d booked her first film role, as the president’s daughter in Iron Man 3. “They cut my entire scene pretty much,” she says. “But there’s two seconds where the screen is on me and my mom and my friends screamed [in the theater].”

Then, as it does with so many young actors, came Disney: In 2016, Ortega scored the lead in the Disney Channel series Stuck in the Middle, which aired for three seasons. Getting the role, Ortega says, was another career milestone. “When I was trying to convince my parents to let me act, I told my mom, ‘I could get on a Disney show if you wanted me to,’ because I think my siblings were watching. We were all watching Disney Channel in the other room. So I was like, ‘I’m going to get on a Disney Channel show one day if you just let me act.’ And my mom just kind of like laughed it off and said, ‘Oh yes, we’ll see about that.’ So, that being something that I had promised my parents that I would do, I was thrilled.”

By the time Stuck in the Middle wrapped, Ortega was 16 and ready to move on to the next, post-child star phase of her career. But it wasn’t that simple. “There’s a stigma that that’s all you could do, or you’re just not a serious actor,” she says. “There were multiple times where I was seriously considering quitting and stopping. Nobody tells you this until you get there, but there’s an awkward phase in your life where you’re going through puberty and there’s a two-year span where work is just extra hard to find. I was too old for the young roles and too young for the older roles. It was really frustrating… You finally have to get that one job that moves the meter.”

For Ortega, that role came the following year when she was cast opposite Penn Badgley in Season 2 of You. “Everyone there was just so delightful and professional and exceptional at what they do,” she explains. “Being in that environment was super beneficial for me, especially being on a set where you were given creative freedom or your voice was heard. But I remember being extremely, extremely nervous because I had only done the Disney acting for the last four years of my life; I felt like I had completely forgotten how to act. I thought that every day I went to the set I was going to be fired for something I did wrong.” Still, she’d jump at the chance to reunite with Joe (perhaps in Paris come next season?): “There was talk [of returning for Season 3], but it was just scheduling conflicts and situations that it just wasn’t possible at the time. I would love, love to be back on that set.”

2022 marks 10 years since Ortega’s first acting job. She’s kicking it off in a big way with two highly anticipated movies out in January alone. First, of course, is Scream. In the film, Ortega plays high school student Tara, sister to Melissa Barrera’s Sam. Until the film comes out on Friday, that’s about all the information either of us can share. The cast includes fellow Young Hollywood actors Jack Quaid, Mason Gooding, Dylan Minnette, and Mikey Madison, as well as the film’s legendary trio: Neve Campbell, Courteney Cox, and David Arquette.

“I remember seeing Neve, Courteney, and David together for the first time, and I think I said three words the entire time because I didn’t want to look like a fool,” she says. “I was really intimidated. It made it feel like it was Scream, you know? They are the franchise.”

For all the gore and murder, Ortega says the set was lighthearted and fun, and even celebrated her 18th birthday with the cast and crew. “We had barely been in Wilmington [Delaware, where the movie filmed] for a week, but my castmate Mikey took me to this conference room and they had all set up balloons and ordered food and had a cake that I blew out with a plate,” she says. “They made such an effort to make me feel at home and special. And I think that, that made it a really, really great birthday. Horror sets are the most fun sets you’ll ever be on. I feel like people who work on horror typically are fans of horror. They love it. They live for it. They have all the best film references. It’s pure entertainment. You’re not trying to overly impress anybody. You’re just trying to give people good time.”

While Scream allowed Ortega to go full bloody camp, her second offering this month, HBO Max’s The Fallout, shows a much more somber, dramatic side. The directorial debut of actor Megan Park, the film tells the story of the aftermath of a school shooting through the eyes of Ortega’s Vada.

“I got to explore Vada’s character more than I have any other character I’ve played,” Ortega says. “So I feel like I know her best. I’ve also never had to do a project that showed such a range of emotions with one character. So that was really exciting for me because I felt like I was flexing my muscle in ways I hadn’t before. I had also never led a film before, which I think requires a new set of skills and is really exciting for me to figure out.”

The film is a quiet, slice-of-life story set in the most horrific circumstances, yet the characters feel real and lived in, a la Nikki Reed’s Thirteen, thanks to Park’s collaborative directorial style and proclivity to let the actors improvise. In a scene where Vada and Maddie Ziegler’s Mia attempt to roll a joint, she let the two teens figure it out in real time, letting the cameras roll. “They gave us this squashed up lavender and were like, ‘Here play with this and see what happens.’ Megan wanted to put in the full seven-minute take,” she recalls.

Also in 2022, Ortega will star in the upcoming Foo Fighters horror film (yes, you read that right), Studio 666, and X, a mysterious horror film directed by Ti West, co-starring Mia Goth and Kid Cudi. And then comes her biggest role to date: Wednesday Addams. “I think it’s the scariest role I’ve ever done because I’ve never played such a character before,” Ortega says. “She’s iconic and extremely cherished and valuable in the horror community. I really, really want to do her justice, but I also want her to be something new.”

In Wednesday, Burton’s first collaboration with Netflix, which co-stars Catherine Zeta-Jones as Morticia, Ortega hopes to show a multifaceted side of the character: “Wednesday is a one-liner character. She usually just says the joke. We’ve never spent so much on screen time with her before. So, how do you take this deadpan, dry, sarcastic character and give her some sort of range and volume enough to carry and lead a story without taking away from who she truly is?”

It sounds like soon enough, thanks to Ortega, we’re going to find out.

Scream is out only in theaters this Friday, Jan. 14. The Fallout is streaming exclusively on HBO Max beginning Thursday, Jan. 27 .

This article was originally published on Jan. 11, 2022