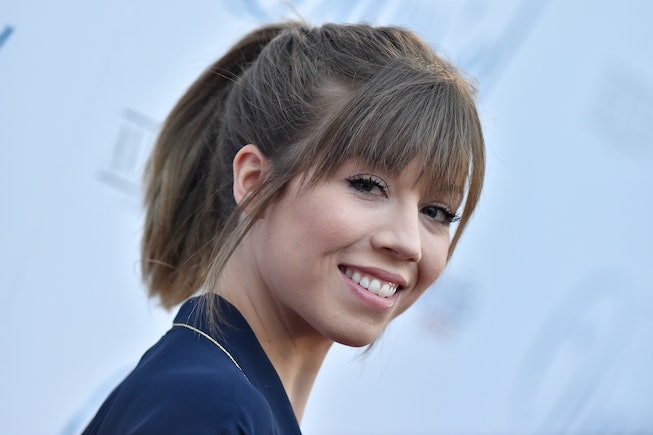 Jennette McCurdy is preparing to release her first memoir, I’m Glad My Mom Died. The tell-all dives into the iCarly star’s troubled upbringing (McCurdy played Sam Puckett on the kid’s show between 2007-2012). According to Entertainment Weekly, it will unveil how McCurdy’s “domineering mother pushed her towards becoming a Nickelodeon mainstay, which led to anxiety, shame, and self-loathing that manifested into eating disorders, addiction, and a series of unhealthy relationships.”

Throughout the book, the now 29-year-old actress reportedly talks about growing up with calorie restrictions, saying she would weigh herself five times a day. McCurdy also claims her mother insisted on “extensive at-home makeovers,” and even made them shower together. Throughout her time on Nickelodeon, the actress says she was forced to share her diaries, emails, and income with her mother as well.

The novel is described as a dark yet comedic take on abuse. The pink and yellow book cover tries to achieve that, with a photo of the McCurdy holding a pink urn that’s filled with confetti.

“Confetti spilling out of an urn felt to me like a good way of capturing the humor in the tragedy,” McCurdy told EW. “But I knew I didn’t want to go as far as throwing the confetti or jumping in the air with a huge smile on my face, or doing any other kind of body language or facial expression that could read as flippant,” she continued. “Ultimately I chose a facial expression that I think reads as sincere, a little pained, and a little hopeful.”

The actress’s mother, Debra McCurdy, died of cancer in 2013. She passed away shortly after Jennette agreed to star alongside Ariana Grande in the iCarly and Victorious spinoff, Sam and Cat. The cross-over show ran for one season and produced 36 episodes before McCurdy quit acting entirely.

After stepping away from the limelight, McCurdy began therapy and was able to unpack her tumultuous upbringing. “It was important for me to explore the emotional and psychological abuse I endured during my time as a young performer,” she said. “I feel like I didn’t have the tools, language, or support necessary to speak up for myself back then, so this book is a way for me to not only honor that experience and give voice to my former self, but hopefully to encourage young people to speak up for themselves in environments where they may be conditioned to just ‘play ball’ and ‘be a good sport.’”

I’m Glad My Mom Died, is being published by Simon & Schuster. The novel, and audiobook — which McCurdy is narrating — will be available to purchase on August 9th.