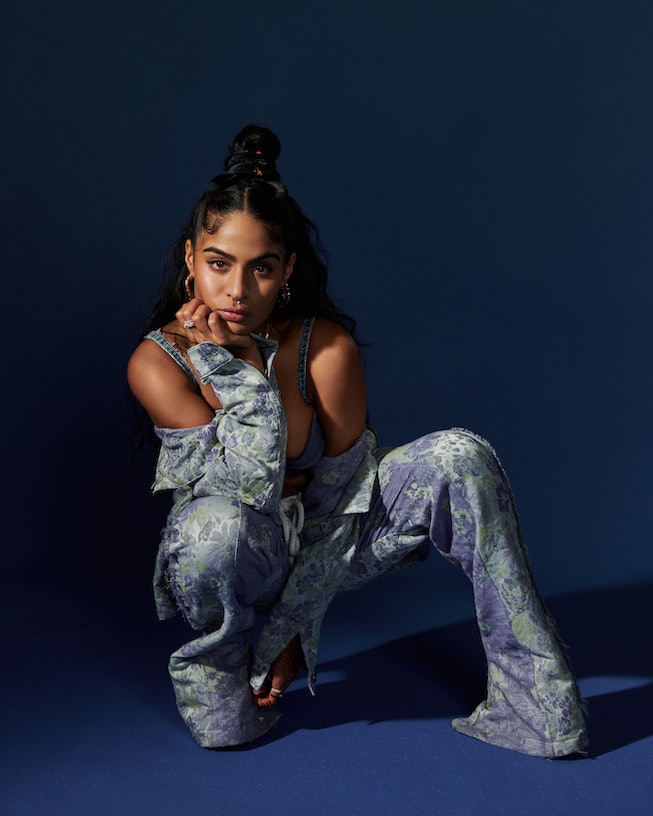 Jessie Reyez is not one to mince words. Her new song “Mutual Friend” — out now via Island Records, from her forthcoming album, Yessie, — follows that philosophy with a blunt message directed at her ex. Over the track’s brooding melody, she sings, “If you died tomorrow, I don’t think I’d cry.”

It’s a cold but not unusual statement for the 31-year-old artist, who has always been candid in her songwriting. From her 2016 breakout hit “Figures,” which grieves a doomed relationship to her most recent single, “Fraud,” which calls out a deceitful partner — Reyez’s music is nothing but honest. Each song is like a permission slip to emote, providing listeners the opportunity to process their emotions with her.

For the past week, Reyez has teased “Mutual Friend” on her TikTok. Though her fans are already praising the track, Reyez insists that she doesn’t create songs for anyone's approval. “I don’t make sh*t thinking about anybody else,” she says. “For my creation process, it’s very singular.” The comfort her music brings others is simply a bonus. “It's just such a f*cking cool thing to get messages or comments being like, ‘Yo, I was f*cking feeling [that way] and this sh*t just reminded me to just be still,” she explains.

On “Mutual Friend,” the singer is at firmly grounded in her stance, indifferent towards her ex, and unmoved by their attempts to make amends. With lyrics like, “Our mutual friend said you’ve been calling / And said that you’re sorry and said that you wish we could talk / Well guess what ? / You’re about seven months late,” her message is clear — forgiveness isn’t always necessary in the process of moving on.

Below Reyez speaks with NYLON about how to get over a breakup, the inspiration for “Mutual Friend,” and why we should all be a little less diplomatic.

How would you define this era of your life?

Lessons. Irony. Like what I said about sometimes when you come to a crossroad and you're like, "Fuck," and you have to take account, like, oh no, wait a minute, this is a lesson I learned a year ago. Or a lesson I learned years ago, and here's my opportunity to put it into practice. To put everything I've learned into practice. Or you f*ck up and you make the same mistake again and then it's like, okay, well, you knew the lesson this time. If you're making the mistake it's not innocence, it's not ignorance, because you knew. So things like that, and also freedom.

Life. Everything. Everything that's in there is what happened. I showed my friend just a day after. He was like, "What the f*ck? What the f*ck?” The conversation that we had 24 f*cking hours ago is a song now? What the f*ck?" So it just hasn't changed, because it's just me talking about life.

Is it about a specific person or people, in general, who have hurt you?

No, it's my life. It's me talking about someone that talked with my mutual friend. It was very literal.

Was the friend you showed it to surprised by your honesty?

I don't think so, because I've always been honest in my music. I think that the surprise was more so the turnover. The convo happened under 24 hours since I made the song.

How did you come up with the funeral theme for the music video?

Peter Horn's [the director] a genius. I report to him so often. We did “Shutter Island” together. We did “Gatekeeper” together. We did “Body Count” together. I just respect his creative process so much, and he just understood the vibe. To be honest, there are certain videos where I take creative reign because I know what it is that I want to see, but this was one where I was like, "Yo. I'm not sure," and he presented this and I was like, "Oh this is f*cking everything."

We just collaborate on different ideas, on having the dancers involved and having the tear in reverse. There's a lot of symbolism that I don't even want to sully by describing it too much because the symbolism, I think, speaks for itself. I owe a lot of respect and I owe a lot of gratitude to Peter because he's a f*cking thug and he's a genius.

It reminded me of the divorce parties people threw during the pandemic, where they celebrated the ends of relationships. Do you think you’ve grown more comfortable with endings throughout the years?

Yeah, but it's just not linear. Some days you could just let things go and then there'll be a day that something pops up on your feed, or someone asks about somebody, or you f*cking get those stupid iPhone memories that you never asked for, but things like that happen.

Then it's harder to celebrate because all of a sudden the memory catches you in a weak moment. But then if the next day you're able to get that energy back and be like, “No, no, no, I have faith in the greater good, I have faith that everything happens for a reason," then you can get that celebratory attitude back.

What do you want your fans to gain while listening to “Mutual Friend”?

Whatever they take. If it's playing while they make memories, dope. If it's a friend in the dark, when they're going through it, dope. If they hate it because it triggered them, dope. I just want to put it out. Whatever they can take from it. Take whatever applies and don't take whatever doesn't.

What advice would you give somebody going through a breakup?

Delete, delete, delete. Throw out, f*cking move, get out of the city. F*ck, man. Help yourself, because it takes you longer when you wallow. It just takes you longer. It's the nature of life. It's f*cking weight. It's gravity. You live on earth, so the gravity of it is going to try to pull you back. So you just have to help yourself because no one's going to be able to do it for you. And even though sometimes people are lucky enough to have friends that are like, "Come to the bar," or family that's like, "Come, come," or whatever the f*ck — if you're not doing it for yourself, if you're not training your thoughts internally, all of that external shit is going to do you f*cking nothing.

You need to just watch your mind, watch your thoughts, train your thoughts, read self-help books. Make affirmation lists. Train your brain and give yourself a substitute so that anytime you feel yourself getting sad, you f*cking make sure you train yourself to have a knee-jerk reaction of gratitude.

Or anytime that you miss them or are feeling that, train your brain to be like, "Wait a minute, wait a minute, what are the f*cking top three things I would always complain about that never changed?" Because no one's ever perfect and no relationship is perfect and f*cking memories will f*ck you because they always end up looking better than what it was, because nostalgia is a thing. So just forcing yourself to grip onto the reality that now is a little bit clouded, just because of the nostalgic grip onto that reality of the sh*t that you couldn't stand, and that sh*t's going to help.

What are you looking for in your next relationship?

I want laughs. I want an intelligent counterpart. I want passion, loyalty, patience, and presence.