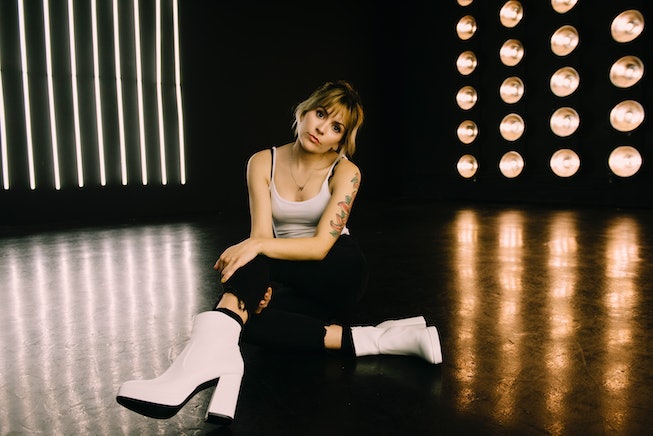 Ohio singer and songwriter Jetty Bones is releasing her debut album Push Back on Friday, a project that ends with a song based off a suicide note she'd left five years prior. That should be clue enough that it's not a lighthearted listen, but that doesn't mean there aren't moments of euphoria to be found. On her newest and last single, "Nothing," she tears through deciding whether to divorce herself from something she loves over a sparkly pop beat that's like a direct shot of serotonin. With its perky drums and sparkly wash of synths, the song makes you want to get up and dance even as she sings: "Cause I might lose my mind if I can’t get you back/ And something you might find/ Is that you’re missing me when it’s too late." It's the kind of song you want when things are bad and you gotta make yourself feel better.

Below, NYLON premieres "Nothing"'s equally exhilarating music video, directed by Mark Eschleman. The visual finds Bones wearing headphones and dancing through the streets of her city, something that probably offers the same amount of catharsis as a therapy session.

Of the song and video, Bones writes in an email: "I’m not sure I even have the words to adequately express how thrilled I was to finally work with my friend, Mark Eschleman of Reel Bear Media, on this video. After recording Push Back, Mark was the first person to hear the rough mixes. We sat in his living room and he immediately started visualizing the idea for this video when he heard the song. Almost a year later, we finally got to bring that idea to life.

This song is about questioning whether you should keep fighting for something you love or let it fade away, all while contemplating the repercussions of either decision. There’s a harsh dichotomy between those two lives, but a connection in the pain. The record touches on that a lot, so Mark and Lindsey Byrnes (who I am blessed to call my creative director and friend) found such a beautiful way to represent that concept (and more). The team we had on set felt like an instant family. Bringing Kimmy Shields into the mix was a perfect addition — the positive energy and comic relief she brought to the shoot made the whole experience one I’ll always cherish."