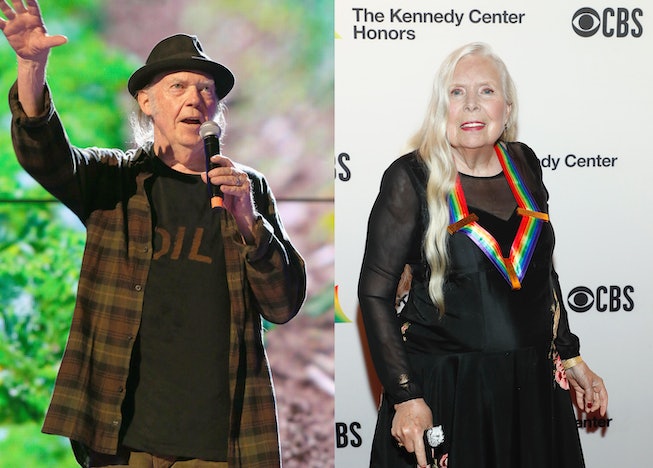 Spotify is facing a swift backlash following its platforming of Joe Rogan’s podcast, The Joe Rogan Experience. The popular show, which has an estimated 11 million listeners tuning into each episode, has been known to share misinformation about COVID-19 vaccines. Despite public criticism — and an open letter penned by 270 doctors, scientists, and educators, warning the streamer of its harmful effects — Spotify has declined to remove the podcast from its service.

Now, artists whose music is also hosted by the platform are speaking out against Spotify’s decision. Country-rock star Neil Young first initiated a boycott against Spotify, writing on January 24th,, “I want you to let Spotify know immediately TODAY that I want all my music off their platform. They can have Rogan or Young. Not both.” Two days later, the streamer deleted all of his work from their service (according to Spotify, Young had over 6 million monthly listeners).

Since then, other major artists have also asked Spotify to remove their music catalogs. Keep reading for a breakdown of everything that’s happened so far:

Who is Joe Rogan?

If you’re lucky enough not to know, Rogan is a former comedian turned television and radio personality, known for his polarizing opinions. The 54-year-old commentator created The Joe Rogan Experience in 2009 and has grown a large following over the years. According to Yahoo!Entertainment, the controversial show gets around 11 million listeners per episode and was named Spotify’s most-streamed podcast of 2021.

In 2020 the streamer signed Rogan to their platform with a licensing deal worth over 100 million. Per their contract, Rogan is expected to produce content exclusively for Spotify.

Why are artists leaving Spotify?

Rogan's show has routinely published mis-information about COVID-19 and vaccinations.

According to Rolling Stone an episode of The Joe Rogan Experience featured Dr.Robert Malone, who has been banned on twitter for promoting misinformation. During the interview he claimed that people believed in vaccines because of “mass formation psychosis.”

He also suggested hospitals were falsely diagnosing COVID-19 deaths to make money. Malone additionally claimed the Biden administration is withholding evidence that supports the effectiveness of ivermectin, an anti-parasitic medication, and its ability to treat COVID-19.

Before requesting his music be scrubbed from the streamer, Young accused the podcaster of “potentially causing death to those who believe the disinformation being spread.”

Upon hearing his concerns, musicians in support of Young concluded that Spotify was acting irresponsibly. By pulling their music, they’ve created a financial burden for the streamer, in hopes that it may influence its decision to keep Rogan's podcast.

Who else has left Spotify?

Joni Mitchell, India Arie, Graham Nash and Nils Lofgren have all removed their music from Spotify so far. Mitchell released a short statement on her website, titled I Stand With Neil Young, explaining her decision.

“I’ve decided to remove all my music from Spotify. Irresponsible people are spreading lies that are costing people their lives,” she wrote. “I stand in solidarity with Neil Young and the global scientific and medical communities on this issue.”

Catherine Mayer, the wife of late Andy Gill — who was the lead guitarist of the punk-band Gang of Four — released a statement as well. “If my beloved husband, Andy Gill, hadn’t died at the start of the pandemic, he’d have strong and clear feelings about your decision to remove Neil Young's music in favor of a podcast that has spread anti-vax misinformation,” she wrote. “If vaccines had been available at the start of the pandemic, he’d be here to have that conversation with you. Instead, I must speak for him. And I have to tell you, as his widow, I feel sick about the business decision you’ve made.”

What has Young said about Spotify’s choice?

Young has released two letters addressing the situation. According to YahooEntertainment, he first wrote about the financial impact of the boycott. Young said Spotify represents “60 percent” of his music globally, and wrote that its removal would be “a huge loss for my record company to absorb.”

Then Young penned another note addressing claims of supporting censorship. “I support free speech,” he wrote. “I have never been in favor of censorship. Private companies have the right to choose what they profit from, just as I can choose not to have my music support a platform that disseminates harmful information. I am happy and proud to stand in solidarity with the front line healthcare workers, who risk their lives everyday to help others.”

In that letter he also joked about an “unexpected bonus,” of leaving Spotify, writing, “I sound better everywhere else.”

Has Joe Rogan spoken about the controversy?

On January 31st, Rogan posted a nine-minute video to his Instagram addressing the situation. In it, he defended his podcast and gave an update on how the streamer wants to move forward.

“Neil Young has removed his music from the platform of Spotify and Joni Mitchell and apparently some other people want to as well,” he said. “I’m very sorry that they feel that way, I most certainly don’t want that. I’m a Neil Young fan.”

“One of the things that Spotify wants to do that I agree with, is that at the beginning of these controversial podcasts, specifically the ones about COVID, is to put a disclaimer, and say that you should speak with your physician and that these people and the opinions they express are contrary to the opinions of the consensus of experts.”

BBC has fact checked the claims made against vaccines on The Joe Rogan Experience.

What has Spotify said?

“You’ve had a lot of questions over the last few days about our platform policies and the lines we have drawn between what is acceptable and what is not,” he wrote. “We have had rules in place for many years but admittedly, we haven’t been transparent around the policies that guide our content more broadly.”

Moving forward Ek said Spotify will publicly publish the rules for what’s allowed on their platform. He then added that the streamer is “working to add content advisory to any podcast episode that includes a discussion about COVID-19”

Later in his statement Ek explained Spotify’s position as a platform for both users and artists. “We know we have a critical role to play in supporting creator expression while balancing it with the safety of our users,” he wrote. “It’s important to me that we don’t take on the position of being content censor while also making sure that there are rules in place and consequences for those who violate them.”