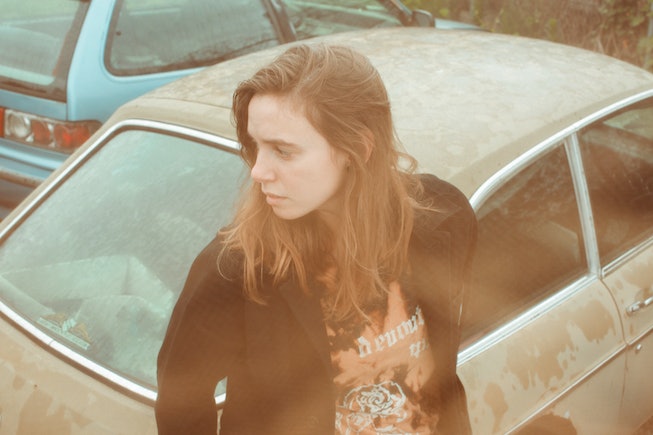 One of indie-rock's patron saints of sad songs, Julien Baker, has shared the first single from her forthcoming third studio album, Little Oblivions. Titled "Faith Healer," the stunning, guitar-laced track is the first taste of her upcoming project which will drop February 26, 2021 via Matador records.

Not unlike the confessional and searing ballads of her previous albums — like "Appointments" from 2017's Turn Out the Lights — Baker's latest track digs tenderly and directly into the pricklier matters of the heart, though this time her ruminations are bolstered by lush instrumentation lending muddier waters for her vocals to swim in. "I miss it high/ How it dulled the terror and the beauty/ And now I see everything in startling intensity," she sings in the song's opening lines.

"Put most simply, I think that ‘Faith Healer’ is a song about vices, both the obvious and the more insidious ways that they show up in the human experience," Baker writes of the track in a press release. "I started writing this song two years ago and it began as a very literal examination of addiction. For a while, I only had the first verse, which is just a really candid confrontation of the cognitive dissonance a person who struggles with substance abuse can feel — the overwhelming evidence that this substance is harming you, and the counterintuitive but very real craving for the relief it provides. When I revisited the song I started thinking about the parallels between the escapism of substance abuse and the other various means of escapism that had occupied a similar, if less easily identifiable, space in my psyche."

She adds: “There are so many channels and behaviors that we use to placate discomfort unhealthily which exist outside the formal definition of addiction. I (and so many other people) are willing to believe whomever — a political pundit, a preacher, a drug dealer, an energy healer — when they promise healing, and how that willingness, however genuine, might actually impede healing.”

Baker's exploration of the complex ways addiction — and recovery — can manifest in our lives directly bleeds into the track's accompanying visual as well. Shot inside the stark interiors of a church and directed by Daniel Henry, the video sees two versions of the same man fight each other as scenes of (presumably) other addicts scanning bible entries or resting are spliced intermittently throughout.

Little Oblivions is the follow-up to Baker's last album, Turn Out the Lights. In 2018 Baker teamed up with Phoebe Bridgers and Lucy Dacus to form boy genius and release their excellent self-titled EP. Hear Baker's newest track above.