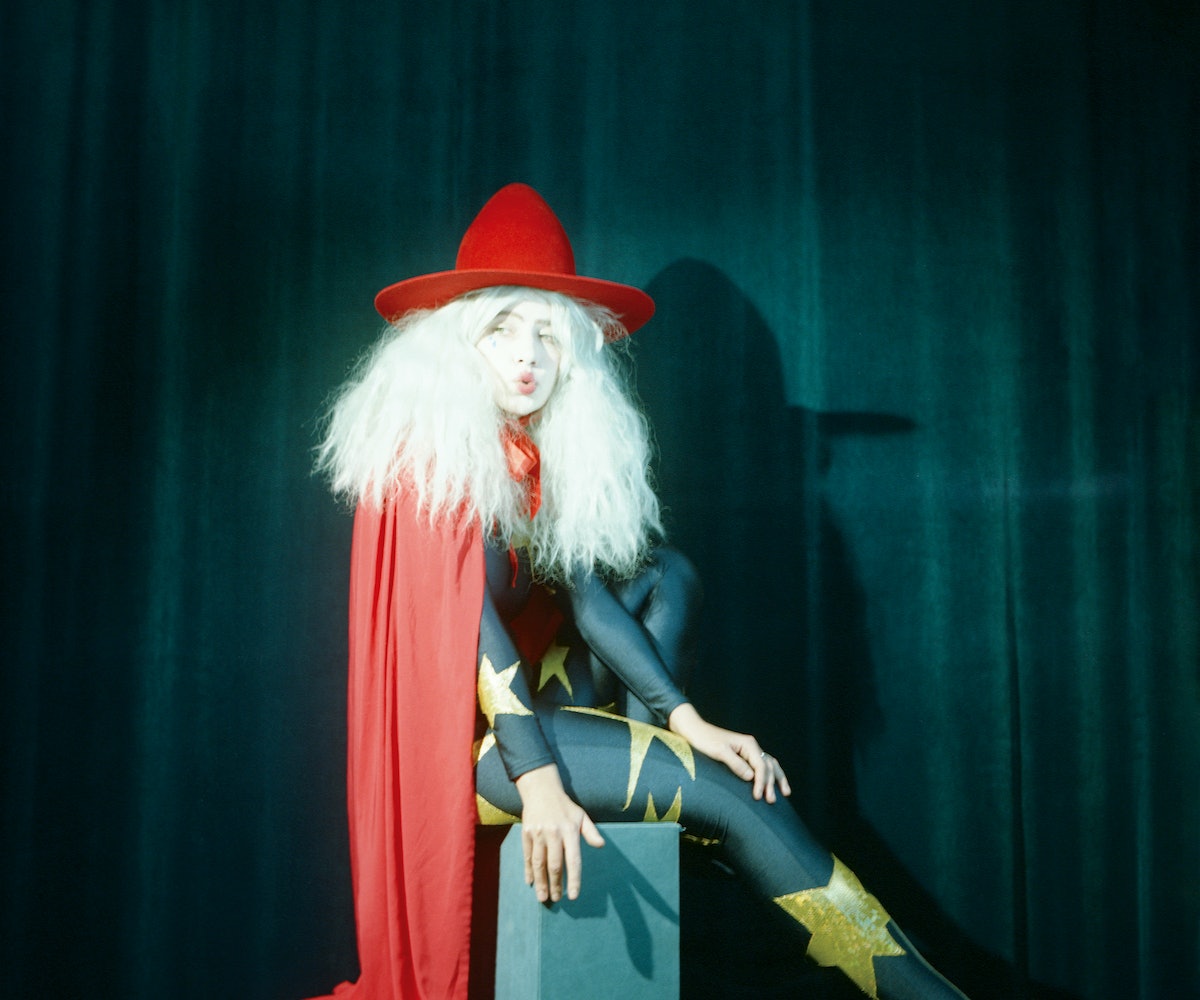 Listening to Kate NV talk about music is like watching a child at play. When the Moscow-based ambient experimentalist artist pops up on the screen during an early April Zoom to discuss the particulars around her whimsical new album, Room For The Moon, she is plain faced and soft-spoken, steering our nearly hour-long conversation along detours on Sailor Moon, The Wiz (her favorite movie), and a quirky tale about a Russian man named Jesus who was detained early in Moscow’s quarantine for walking his dog near his home (“The most insane thing!”). Speaking with her, one gets the sense she is constantly delighted by the universe around her. Her music, which plinks and whizzes with life, feels the same.

Room For The Moon, her third studio album, in many senses functions as a time-capsule of her childhood loves: ‘70s and ‘80s kids films animated by clunky CGI, retro Japanese pop, her beloved imaginary friends. They’ve all reunited to reacquaint with one another in a magical world she’s constructed out of twinkling xylophone, shuffling percussion and her own ethereal cooing. It’s immediately transportive and visceral. A joyful surprise in a world that’s increasingly depleted of them.

“When you remember how you felt as a child, everything becomes a little bit more magical,” she says. “That's how I felt when I was making those songs. It's like I was having a conversation with myself, but younger self.”

Music making for Shilonosova is tending to a separate entity (and music is a ‘she,’ Shilonosova affirms), one that requires constant communication, nurturing, and satisfying the errant whim. “Sometimes there is no fish,” she says. “And sometimes there's lots of fish.” Below, our edited and condensed conversation where she chats candidly about the magic of being a kid, field recordings of weird birds she’s encountered in her travels, and why music will never feel like work.

I'm very excited to talk to you because I think your album is such wonderful music to have right now, given everything that's going on. But I'm sure when you were making it you weren't expecting it to come during a pandemic.

No. It's hard to expect something like that. I actually went through different stages of the way I react to the reality. You know the different stages, some of your friends or relatives, they die. And there are seven stages, and the last one is acceptance. So I'm in the last one. Because there's nothing much I can do about this thing.

I've been thinking a lot about music these days and how people will react regarding the whole thing. It's funny, because my whole life as a musician, just because I live in Russia, it's quite unstable here all the time. Most of the time. It's a crazy country. And we got used to that. But you really got used to stressful situations. Every time it's just knocking you out from your next move in the world. And you have to deal with this somehow. And just because it's very unpredictable, I just learned to at some point ... not to relax, but to just accept the way it is.

You released a music video this week for “Marafon 15” where we can see your songs translated into a visual world. Can you tell me a little bit about how you conceptualized that world?

While I was working on the record, I had a feeling that I'm talking to myself as a kid. I think most of the people, they have those kind of memories from their childhood that really affected them a lot. Probably they don't really understand it. But it's just something nostalgic about your childhood and the way you felt as a kid. And when I was making this music I really felt that I actually heard myself as a kid. I really loved it. It's like making a friend with yourself, which is actually great during social distancing. But I had my moment almost a year ago, when I realized that I don't have friends in real life, and I was probably the only one. I actually felt really alone. I guess those songs is just ... I kind of created myself new friends. And also making a friend with myself.

I met up with the director of this music video, Gina Onegina. She was like, "I imagine you in a spotlight in a costume with stars." And I came home and immediately the whole character just happened. I draw a lot, so it's very easy to turn my thoughts into a paper drawing. So this character just happened. It popped up on my paper. I think those characters, they all come from my childhood. It's just a combination of all the various tales I've watched as a kid. And what I really loved about that period of time, ‘80s and ‘70s, is that everything was kind of handmade. And those handmade things, they actually were very relatable. Especially when you could see how the whole outfit was made of, I don't know, tissues or something like sponge or whatever.

Even though your music came out of feeling alone, it's very joyful. Has making music always been a very joyful process for you?

I have very weird relationship with music. It's not like I'm forcing it to do something. First of all, in Russian, music is she, so I feel like I'm having a conversation with her in some ridiculous way. I'm talking to her, and she tells me, "Hey, this time I just want to be like that. And let's do something with this." And I never force her. She tells me, "This is a song. You need to sing here." Or, "This is a song probably you should sing in French." And I'm like, "Yeah, fine." It's a constant conversation to her. I'm just an instrument in this story.

I think the whole life of an artist is a creative process. All the information you get, you get it as a sponge, and then you're trying to somehow work it in your head, in your heart. And then you just sit in a chair and something happens. When I play concerts and improvise, I usually compare it with fishing. And it's like you're a fisherman. You sit somewhere in the pond and you just catch the fish. And sometimes there is no fish. And sometimes there's lots of fish. And music is the fish. And sometimes she comes to you. Sometimes she doesn't. Or like you can also compare it with cats. I mean, cat is more like, "Yeah, I'll sit with you," or, "No, I'll skip it. I will go somewhere else." Maybe a bird will inspire and give you a melody, or, some weird sound in the street, or whatever.

Do you ever take field recordings?

Yeah, sometimes I record very weird sounds. I have four different weird birds from different places. I have very funny swans from Iceland. I have very nice birds from Germany and from Moscow park. And I actually used one of these birds in one of my tracks, but not on this record. On another one. Because I have another album finished. I just love to record random stuff. I recorded a lot of stuff in Japan, just because Japan is insane. They have sounds everywhere.

Are there ever moments where you get frustrated, or does making music ever feel like work to you?

No, really. I was thinking a lot about it. Recently one guy texted me on Instagram, because he was like, "Can you please listen and check my music. Do you think it's shitty?" Why would you start [a] conversation like that? You created it. You should love it. He told me that he doesn't really like the process.

I really enjoy every moment of making music. Even just chopping the sample, it's very boring sometimes, but at the same time it's not boring at all; it's very exciting. It's just like building some small, small, small universe inside of your laptop.

Do you ever think of music in a business sense? Like how many people are going to listen to it, or how it's going to support you?

Yeah. It's also a good question. I just realized that success is my ability. I can do something that I really like, and that is what I can call success. I can pay for the rent by doing something that I really like. But at the same time, the pressure coming from the outside world sometimes can be really frustrating. I created this album just as a message to those people who can listen to it and find something for themselves in those songs, and maybe understand around the way I understand those songs and I perceive them. I would just love to find those kind of people, you know? If music is a language, then my music is a message to those people.

As a huge Sailor Moon fan, in the last season, there's a music band called Sailor Starlights. The thing is that they've been singing those songs, they've been looking for a princess, and there was a message behind those songs. And all of the Sailor Fighters, they could feel it, that there's something more about that music, some message. And I just think that art and music is some kind of a code. I think that I'm looking for those kind of people at the moment. If you watch Sailor Moon you will probably understand what I'm trying to say.