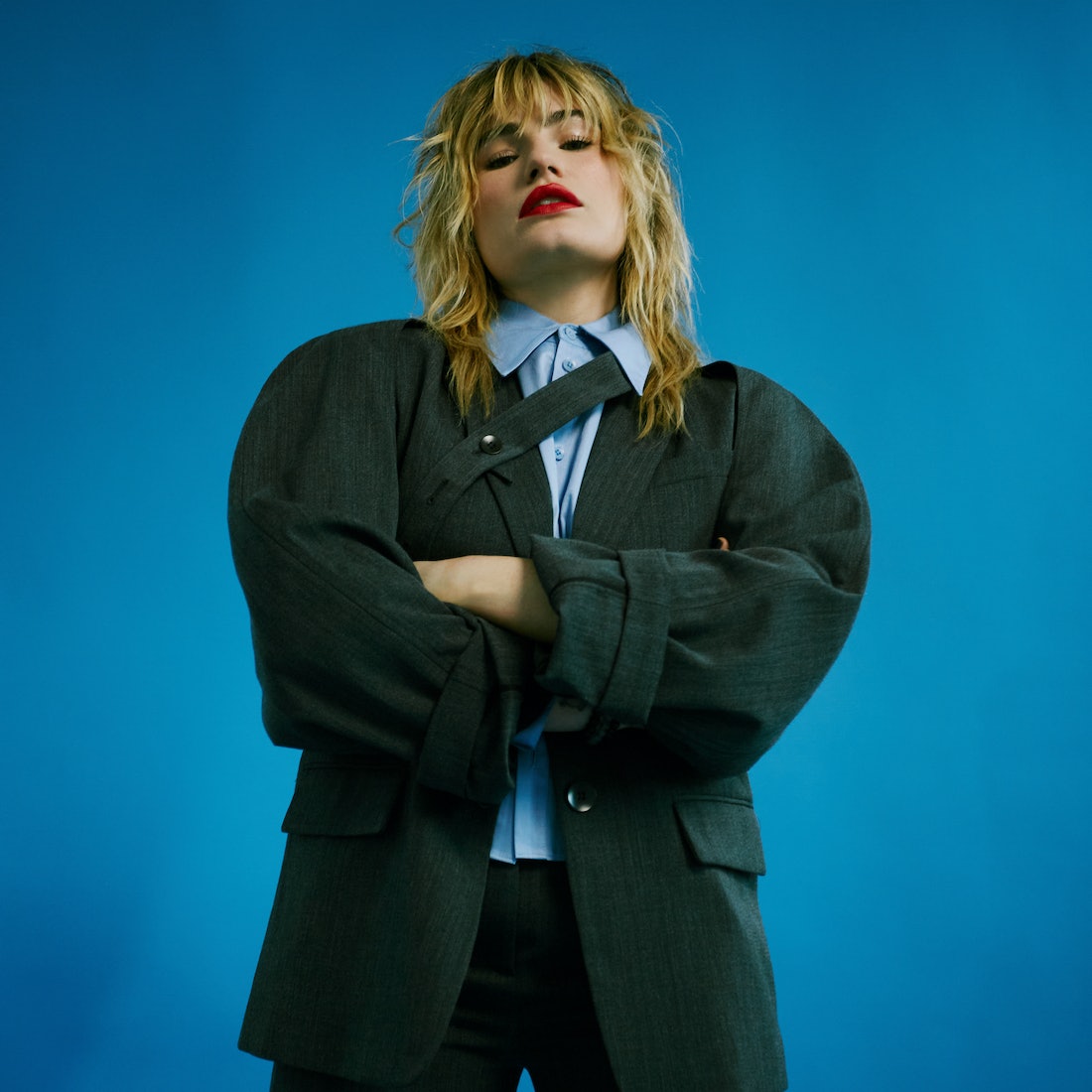 Kathryn Gallagher On ‘Jagged Little Pill,’ ‘Gossip Girl’ & The Crystals That Ground Her

Kathryn Gallagher’s new company, VIBES, may be all about quelling anxiety by curating the most peaceful vibrations possible, but the singer and actress’s current day-to-day schedule “is literally insane.” After all, it’s not easy being a multi-hyphenate television actor, self-produced songwriter, and Tony-nominated Broadway star.

First, there’s Jagged Little Pill — the Diablo Cody-directed Broadway musical based on the music of Alanis Morissette’s 1993 classic alt rock album of the same name. Gallagher stars as Bella Fox, a friend of the Healys, a seemingly perfect Connecticut family soon revealed to have more than one skeleton in its closet. Gallagher’s Bella is at the center of a sexual assault plot line, bringing the topical issue-filled story to its crescendo with a show-stopping performance of “Predator,” the only original song Morissette wrote for the show. Gallagher was originally in the ensemble, but her part was upgraded to a principal role with the addition of the song, in a wise move that clearly paid off: In October 2020, she was nominated for the Tony Award for Best Featured Actress in a Musical, her first Tony nomination. (Jagged Little Pill also won a Grammy award for Best Musical Theater Album the same year).

I saw Jagged Little Pill back in March 2020, right before the first shut downs. “You probably saw me actively spraying COVID everywhere,” Gallagher says half-jokingly of that dark time period, when it turns out Gallagher was actually sick and didn’t know it. Growing up, Gallagher — whose parents are Paula Harwood and the actor Peter Gallagher — split her time between school in Manhattan and an idyllic weekend life in the woods of Connecticut. She returned to her childhood country home to ride out quarantine, tending to her garden and working on her first passion from childhood: songwriting, releasing her third and fourth EPs, “Demos, Vol. 1 & 2,” produced by herself from her family home. With a pop-rock sound drenched in influences like Morissette herself, Gallagher’s most potent instrument, her voice, comes through both bright and rich.

During that period, she also started VIBES with her friend Julie Rieger. As “vibe mixologists,” the company provides a space for novices and experts alike to access information about crystals and “all things metaphysical” (and to shop for those things, too). “As a bisexual theater geek, I feel a crystal obsession was the next step,” Gallagher says. “I think it can be really intimidating when you want to get into crystals, but it’s like, ‘Which one, and what do I do?’” That’s where VIBES steps in, to act as the knowledgeable friend everyone wishes they had. Five percent of VIBES’s profits go to the child-centered Joyful Heart Foundation, whose mission is to “heal, educate and empower survivors of sexual assault, domestic violence and child abuse,” and of which Gallagher is a board member.

As we’re speaking, Gallagher is wearing bracelets from VIBES — and she notes that she wears them on stage, too, as a way to ground both herself and her character, Bella (specifically, she wears Black Tourmaline, Smoky Quartz, and the natural lithium Lepidolite during shows). Broadway is finally back in full swing, meaning Gallagher is performing Bella’s heart-wrenching narrative eight times a week, an unbelievable feat of stamina.

“It was so important to me to reopen the show,” she says of the rewarding if somewhat demanding experience of being back on Broadway. “I know someday I will have to say goodbye to Bella Fox, which will be the most emotional day probably ever. Right now, I keep saying this thing to my friends and to myself, which is that I just keep trying to do the next right thing. And in my brain right now, the next right thing is probably ordering pasta for dinner. And then I start a workshop with a new musical tomorrow. And so the next right thing tomorrow, or later tonight, will be learning those songs. So I think the moment to leave the show, I'm going to know. And that's going to be the next choice, but I'm definitely in it for a bit longer, that's for sure.”

Though Gallagher is at home on the stage (she made her Broadway debut as an ensemble member in Deaf West Theatre’s 2015 revival of Spring Awakening, which she says is her favorite musical), she’s also familiar with appearing on screen. Gallagher most notably played the role of wise-cracking Anika Atwater in the first season of the wildly popular You, starring Gossip Girl O.G. Penn Badgley as a New York “nice guy” with a penchant for obsessive stalking. She also, somewhat coincidentally, has a guest role on the Gossip Girl revival, portraying the big sister to Eli Brown‘s Otto “Obie” Bergmann.

As the real-life daughter of one of television’s greatest dads, Sandy Cohen, on The O.C., Gallagher came into the experience with a wealth of knowledge and a depth of love for the modern day teen soap opera. “I remember when I worked with Penn on You,” she recalls, her voice lowering to a whisper, “I was just like, ‘It’s f*cking Dan Humphrey!” She adds of growing up a Gossip Girl devotee, “I’m 28, that’s who I am, it’s in my body,” adding that she also listened to Taylor Momsen’s band, The Pretty Reckless, “obsessively” in high school, where like any true, “very emo” baby millennial, she was prone to side bangs and excessive eyeliner.

Gallagher was around ten years old when The O.C. was one of the biggest shows on television, and she says back then, show stars like Rachel Bilson and Adam Brody were like her cousins. Now, being on the set of a new zeitgeist-capturing teen series as an actress herself feels surreal. She says she and her dad talk about everything, even running lines together for her Gossip Girl role.

As her world continues to expand, from the Broadway stage to HBO, to a potential live tour of her music, Gallagher seems to stay grounded in the mercurial nature of change itself. As long as there is another project in front of her, all she needs to do is the next right thing. “I think one of the things that makes Broadway magical and difficult, is you’re saying the same words, wearing the same clothes, eight times a week, for a year plus,” she explains. “And that takes a different muscle, to find ways to keep it fresh and deep and meaningful. And in television, it's sort of the opposite challenge, where the pace is fast. You're always doing new things. You never know what to expect, often times, until the week before. The life is very different, I think. I feel very lucky that I've gotten to do both.”