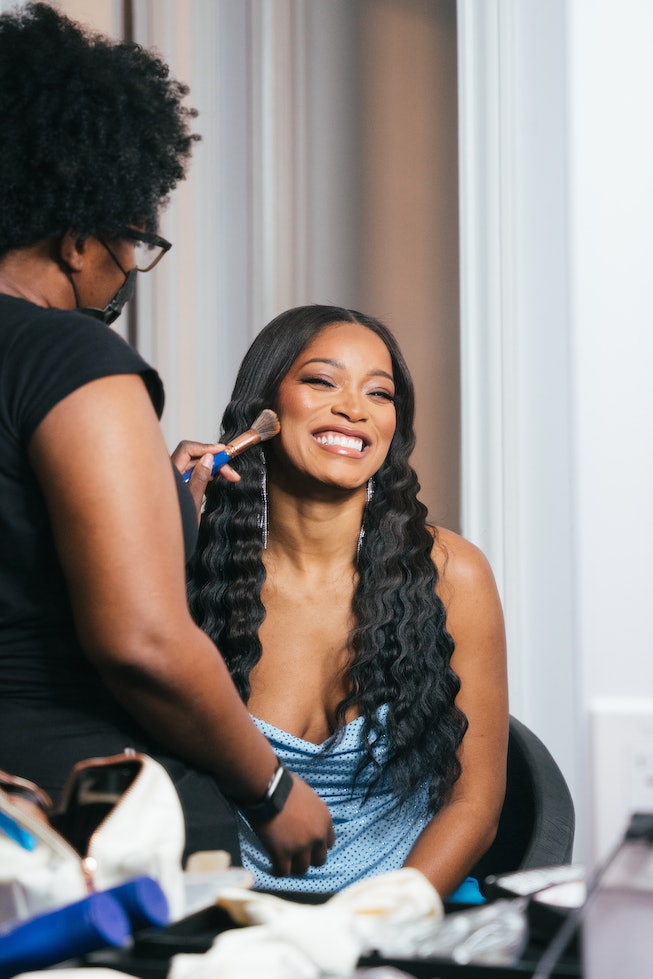 Before Keke Palmer was a coveted award show host, TV emcee, universal meme, and one of Hollywood’s most beloved do-it-all stars, the 28-year-old actress had a brief but impactful music career. While she returned to music in 2020 with the release of her two-part album Virgo Tendencies, her first musical effort was all the way back in 2007 with her debut album So Uncool, a collection of energetic pop songs of the teen star variety.

But, this being Palmer, there were still a lot of grade-A bops, like fan-favorite track “Bottoms Up,” her party anthem with shoutouts to her midwestern upbringing that didn’t do great on the charts at the time, but that’s recently been resurrected by enthusiastic fans across social media. The song pops up as a reference frequently on Twitter as people reminisce about the seemingly infinite past lives Palmer has lived. And on TikTok, people still film themselves doing the song’s delightfully 2000s choreography.

Now, perhaps encouraged by her fans’ nostalgia, Palmer has re-created “Bottoms Up” for the 2022 era, with updated lyrics and a glossy new music video to boot. Released on Friday, “Bottoms Up 2.0” also aligns with the star’s 20th year in the business — a remarkable achievement considering she’s only 28. Yet, two decades later, Palmer is still as charismatic and sharp as ever, as she makes the well-worn and loved song feel brand new again in her recreation, ready to soundtrack cookouts and throwback fetes for another 20 years.

“This year I am marking my 20th year in the business and I wanted to celebrate that with a fun little trip down memory lane,” Palmer tells NYLON about “Bottoms Up 2.0” over email. “I entered the music industry at a young age and had the opportunity to write a song with my sister for my first album So Uncool. It was a song that the OG fans loved. They still sing it to me wherever I go, tag me in the dances they create to it on social media, and add it to all their throwback playlists. So, I thank them! This is my gift to them — a rewritten, re-recorded ‘Bottoms Up 2.0’ with a new video. Hope y’all have as much fun watching and listening as we did creating it for you!”

Directed by Lawrence S. Murray, the new clip finds Palmer executing crisp and clean choreography while channelling the playful fashion of the late-aughts and bringing the party everywhere from the dance floor to the subway train cars.

Watch “Bottoms Up 2.0” above, read on for behind-the-scenes shots from the making of the video, and Palmer’s own candid commentary about how she and her team brought the 15-year-old track to life.

Glam baby!Alex Lutt
We were having so much fun on set & falling into all the 2007 feels.Alex Lutt
Alex Lutt
I was living for the girl glam vibe of the first half of the video. If you look at the wall above me, you can see there’s a poster with some of my looks over the years since the original “Bottoms Up” came out. If you know me, you know I’m a hair girl and I come from a family full of hairstylists!Alex Lutt
Working with my director, Lawrence Murray, on making sure our choreography was filmed just right. Lawrence was so incredible on this project & has basically been on my team since my “Bottoms Up” days. Yes, he started out on my street team!Alex Lutt
MY MOMS ON SET! As always, this woman is everything and I love including her in projects. She has a few cameo moments in the new video!Alex Lutt
Getting in those final touch-ups with my makeup artist, Jordanna Davis.Alex Lutt
Of course Lady Miss had to make a cameo too! ;)Alex Lutt
This was a really special moment for me with Lenoria (left), Courtney (center right), and Courtney’s daughter (right). I met Courtney back in my Scream Queens days when she was a stand in for the show. She was on set and I wanted her to bring her daughter who is an actress, for the second half of the video which takes place on a train. It’s an ode to when I was a little girl doing the video to “Keep It Moving.” It felt very full circle and in some ways sharing the stage with the next ones coming up.Alex Lutt
NEXT UP
Entertainment
Meet Amy Allen, The Grammy-Nominated Songwriter Behind Pop's Most Honest Hits
Entertainment
Beyoncé Announces 41-Date 'Renaissance' Tour
Entertainment
FLO Is Headlining Their First US Tour This Spring
Entertainment
Boygenius, LCD Soundsystem & Steve Lacy Are Headlining A Summer Concert Series
Style + Culture, delivered straight to your inbox.