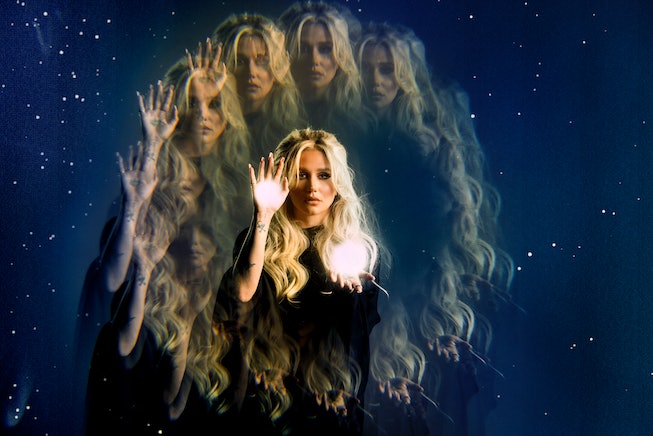 Though Kesha’s affinity for ghost hunting may be new to fans, it’s always been a hobby for the 35-year-old pop star. Kesha’s interest in the supernatural began when she was a toddler and has remained a core part of her identity ever since. “Every time I’m in Milwaukee I always stay at the one supposedly super-haunted hotel,” she tells NYLON ahead of her new show visiting America’s most haunted locations, Conjuring Kesha. “My band’s like, ‘Can we please just stay at the W?’ I’ll be like, ‘No, we're staying at the place where Jeffrey Dahmer might be haunting. Just in case he feels like being active tonight, we’re going to be available.’”

When we meet to discuss the new Discovery+ series, the singer is staying at the Soho Grand Hotel in Manhattan. It’s not haunted — as far as we know — but it certainly is active. Her suite has been converted into a makeshift studio and she’s in full glam, sitting in front of a green screen and three cameras.

While her team buzzes around the room, divvying out tasks and coordinating her schedule for the day, we discuss her interest in the unknown. “It became part of my routine to make music tours and stay at haunted places,” Kesha explains. “And then in between, [we] go camping and look for aliens. I’ve just always had the more fringe ideas of supernatural and paranormal things as my hobby.”

Conjuring Kesha turned the singers' hobby into a fully-fledged project. In each episode, Kesha, who both stars in and executive-produces the series, recruits a friend to join her on a spooky adventure. Together they tour a haunted site — like the Brushy Mountain State Penitentiary in Petros Tennessee — and learn about the location's troubled history. “It was the best time I’ve ever had doing anything in the entire world and [it] also informed the way I look at the world,” she says.

And while there are plenty of shows purporting to show paranormal phenomena that don’t quite deliver, Kesha wants viewers to know that everything she and her team captured is 100% real. “As an executive producer of the show I just want to make sure everyone knows there's nothing fake about the show,” she says. “There's nothing that has been faked, period.”

Conjuring Kesha is now available to stream on Discovery +. To celebrate the show’s premiere, Kesha spoke with NYLON about the most haunted location she explored, connecting with ghosts, and seeing her cameraman get scratched by a demon.

How long have you been interested in ghost hunting?

I've been interested in the paranormal since I can remember. In hindsight, I can say they were paranormal, but at the time I just thought they were weird experiences. I would see something and kind of not be able to describe it to other people or my mom. And she'd be like, "What are you talking about?" So that started really young.

During COVID, I had an evening where I was having a complete existential crisis about the state of everything. I think it just got to be so intense that I had an experience that's hard to explain, but it felt almost psychedelic. I felt this instant connection to something bigger than myself. Some people call it God and some people call it the universe or source energy. For me, it's higher consciousness.

I don't like to put a label on it because I don't know what it is, but I felt this overwhelming feeling of not being alone. Ever since that experience happened, I wanted to incorporate the paranormal and the spiritual side of my hobby and my interests into my life more. And I wanted to share it with my fans and take them on this journey with me. So it started from a spiritual place, but then in coming up with the concept of the show, I wanted to also take my friends and scare the shit out of them in different locations. Each episode is me taking a friend of mine and just throwing us into a bizarre location and situation.

What did your friends say when you asked them to join you?

Some were like, "Fuck off, no." And some were like, "Sure, whatever. I'll come." Whitney [Cummings] was kind of skeptical, so I don't think she thought of it as being that big of a deal. Like, “Oh, we'll just go do this silly thing.”

I took [my friend] GaTa to come to the Westerfeld House in San Francisco, and I'm pretty sure he thought that a lot of it was going to be faked. I'm so intentional about this being a hundred percent real. There's nothing fake at all. It's really important to me. I'm an executive producer. I'm taking this whole journey really seriously because I'm in it. There's no bullshit to it. So some people were down, some people said, "Fuck no." And then some people thought it was fake until I had to sit [them] down, [and] be like, "Deadass, none of this is fake."

Why do you think people are interested in connecting to the paranormal?

I like watching shows like this because it helps me feel a connection to the intangible world. It makes the world feel just a little bit more magical. It makes me feel like there's something bigger out there. There's something more to this life than we can see. There's something more than just work, eat, drink, fuck, [and] sleep. There's more to it. It seems like there's a bigger purpose potentially, that we're all here. That there's an energy that lives on in us that maybe lives on into the afterlife, and it makes me excited about the potential of what could be out there.

How many destinations did you guys visit?

Do you have a favorite?

The Westerfeld House in San Fran was supercharged with wild artist party energy. Anton LaVey was there with the Church of Satan and Houdini was there doing experiments, telepathy experiments. The first radio signal was sent out on the West Coast from this house, because it, at the time, was the highest point in San Francisco. So this house was just supercharged. There was so much energy. Standing in the house, it felt electric. And that's when I took GaTa. And he really thought it was fake because it was just so much activity.

I think if I were going to live in any of these places, that would be my choice. But the last location with Big Freedia, [the] Trans-Allegheny Lunatic Asylum, was an intense and beautiful experience. There was a lot of paranormal activity. A lot of things happened that were unexplainable. And I did see my cameraman get scratched by a demon down the spine.

Supposedly demons scratch with three to mock the Holy Trinity — the Father, Son, and The Holy Ghost. So they'll scratch with three to make a mockery of it. And then the psychic we were with put holy water on his scratch, and it went away. Just seeing all this in real-time and catching it all on camera, it's so wild, that I could understand why the viewer would be like, "There's no way this is real." But I swear to God, as an executive producer of the show I just want to make sure everyone knows there's nothing fake about the show. There's nothing that has been faked, period.

Were there any moments that truly scared you while you were filming?

Yes. At Bloody Brushy with Whitney Cummings, there was a room there that had really dark energy. It's the men's prison, a lot of people just murdered each other. They kind of put all these men together that society didn't want to deal with, and some people were just really violent people, and [they] let them loose with each other.

One of the guards we spoke with said, "Yeah, I saw the inside of a man's skull." They would just let the prisoners be super violent and take out their violence on each other. There was one room in particular where it felt so dark that I did not want to go into it. Whitney ended up going in, and she had her experience. But I did not feel comfortable going in that room for a couple of hours, which was terrible for production, but that's why I'm telling you this shit was real.

If I did not like the vibe of a room, I was not going in there. And if something paranormal didn't happen, that sucks, but I'm not going to fake it. I think that’s the part I'm the most excited about in this show. I know from firsthand experience none of it was fake. And that's why I find it so exciting because there's some shit out there that you cannot see and you cannot explain. And I saw it, and it's on the show, and it's a trip.