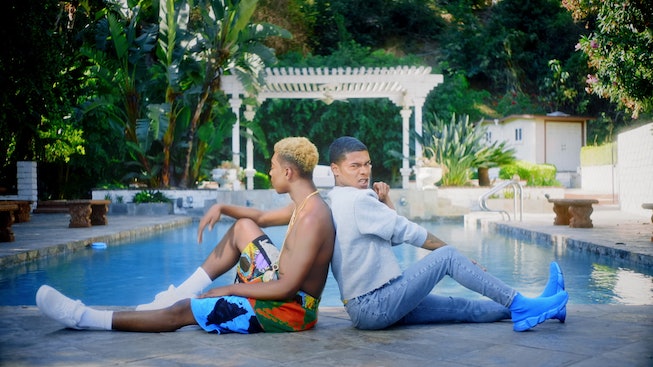 For over a decade, social media and hip-hop have engaged in a mutually beneficial relationship. In the YouTube era, rappers such as Soulja Boy, GS Boyz, and the recently deceased Huey reached millions of views through their Billboard-charting dance inspired singles. In the blog era, Kendrick Lamar, Drake, and J.Cole accumulated thousands of followers through their mixtapes. At the end of the Instagram era, Cardi B bewitched millions of fans through her transition from social media personality to Grammy-award winning rapper. As we enter the TikTok era, there’s one rapper you need to know about: Kidd Kenn.

A self-described “social media type of kid,” 17-year-old Kenn used Instagram to promote his queer-flipped versions of songs from his contemporaries like Famous Dex and FBG Duck that crossover to Twitter, where his regional Chicago drill gained the attraction of singers like Kehlani — who then featured Kenn at her headlining performance for San Francisco Pride in 2018. Two years later, Kenn performed at a variety of digital PRIDE festivals, such as Chicago’s Pride South Side, UMG Pride, and Global PRIDE among others. The teenage rapper then truly captivated his Gen Z fan base with a collaborative freestyle featuring Delli Boe that went viral on TikTok from his upcoming project.

As Chicago’s first openly gay rapper, he’s transformed his loving and lovable social media personality into being an advocate for LGBTQ youth who are fearful to live their authentic lives. Kenn's fearlessness and visibility as a youth who remains truthful to himself in hip-hop resulted in a placement on GLAAD’s 20 Under 20, where he applauded Young M.A. as an inspiration of resilience.

The Phillip Soulliere-directed video for "Freestyle," premiering on NYLON below, features Kenn and Delli enjoying a hot summer day by the pool as they unleash bar after bar. On working together, Kenn says, "Me and Delli met on Instagram about 2018-2019, and we supported each other from different states. Earlier this year, we were both in LA at the time and I hit him up and we linked. He came to my hotel and we sat by the pool, talked about our career and goals, and then we just said fuck it, we'll go do a freestyle together and go viral to show the world. So we wrote it in like 20 minutes, learned it in like a 30mins-1 hour, hopped in the back of the Tesla and did what we said and the rest y’all know."

After a month of awards and celebrations, NYLON spoke about his transition into youth-led LGBTQ advocacy, the evolution of his writing process, and staying connected with his fanbase through quarantine.

Due to the increased education and visibility of LGBTQ people in the 2010s, Gen Z is coming out at earlier ages — like 10-years-old — where the millennial generation came out around 13. As a youth LGBTQ advocate, have you received messages from fans about advice and comfort?

When I see messages like that, it feels good to me because I’m inspiring people to be comfortable with themselves. I’m living as myself and it feels so good, that I can’t even explain. So, I encourage fans to live as themselves, and I’m always there for them.

At the age of 13, you uploaded your first freestyle to Instagram. For youth who are interested in pursuing this as a career, what advice would you give?

I would tell everyone that they’re on the right path and keep working. If I could go back, I would encourage myself to keep working because the work is never done.

In alignment with current social media trends, your latest freestyle reached over 1 million views on TikTok. Have you adapted the way you interact with fans on that platform, than on Instagram and Twitter?

The last time I was in the airport, a group of young people knew who I was because they follow and watch what I do on TikTok. On TikTok, I’m an actor, model and rapper, because it’s made so that people can be whoever and whatever they want. All the youth know who I am because of that platform, so that’s helpful and good.

Throughout your career, social media has played an important tool. Yet, do you feel like it has been a source of pressure on you as well?

In my eyes, my first EP [Childish] was rushed because I got a bug from rapping on social media and was like “Hey, lemme give them something.” With this project, I took my time and made stuff that my fans and I will like, because they already showed support when I previewed a little on socials.

Based on our conversation, it seems that you’re taking a different approach to your next project than earlier ones. Was that reflected in the writing process?

I don’t have the same writing process as before. It’s different. On a few of the songs, a more mature side comes out but it’s really good. Whether I’m in the studio or having a conversation with my friends, I can sit and write out a song from scratch, based on our interactions or something that came to mind.

A more mature side?

On this project, I’m introducing a new character, Kenn. He’s a polished version of me, the version of me that fans were exposed to when I first came out. It’s like two brothers going back and forth and you’ll hear it on some of the songs. It’s something new and I can’t wait for my fans to hear it.

Since you’ve signed to Island Records, does music still remain a therapeutic outlet for you or is it shifting towards work?

It feels like this is what I made to do. It’s something that is a part of me. In the morning, I write and make songs without an influence. It feels like regular life.

Historically, hip-hop was classified as a welcoming genre for LGBTQ people, yet you’re part of a renaissance where openly queer rappers are evolving the genre. How does it feel to be one of the youngest rappers in this collective?

From the beginning, I came out as myself and remained truthful to my being. I never tried to be anything other than me, because I’m confident in who I am. It’s good to see other rappers transition into becoming comfortable with themselves, because it feels good to be yourself.