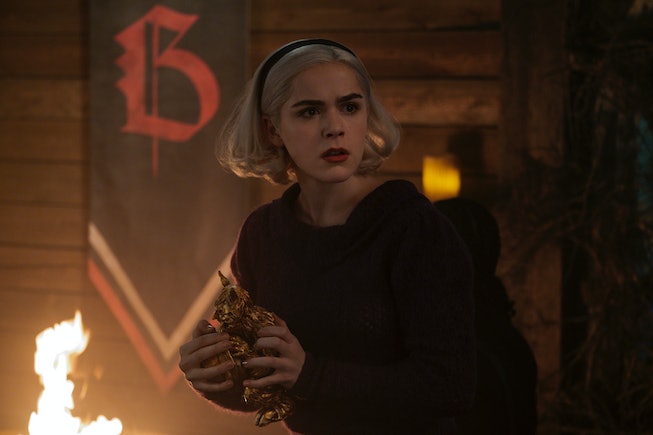 Sabrina Spellman — everyone's favorite teenage witch from Netflix’s The Chilling Adventures of Sabrina — is taking a trip down to Riverdale.

Kiernan Shipka confirmed her upcoming appearance on the CW series today, with a surprise photo posted on her Instagram feed. In it we see Shipka dressed in her signature Sabrina-style get up — all black with a matching headband — while sitting on set in a chair that reads, Sabrina Spellman, Riverdale. The actress captioned the photo, “from Greendale to Riverdale. See you in season 6.”

The Chilling Adventures of Sabrina was cancelled last year, making “Chapter 4” their final season. Many fans were shocked given the show’s dismal ending, which killed off Sabrina’s (and her evil twin) character to save her friends and family. As many pointed out, it didn’t make sense that such a powerful witch would meet such a dire fate.

Apparently, it’s not so simple. Sabrina’s appearance on Riverdale next season appears to be a continuation of her story. According to Riverdale’s executive producer and series creator, Roberto Aguirre-Sacasa, the choice to intertwine the two fictional-neighborhoods has been in the works for years. In a statement shared with People Magazine he said, “We’ve been talking about having Sabrina visit Riverdale since Season one, so it’s thrilling that it's finally happening as a part of our Riverdale special event.”

Both fictional universes are a part of the Archie comic book series, so it’s not particularly surprising that their stories are beginning to overlap. How Sabrina manages to escape the afterlife is still under-wraps, but her character reportedly travels to Riverdale to help Cheryl Blossom in her time of need.

Sabrina will appear in the fourth episode of season six titled, “The Witching Hour(s). Per the episode description, Cheryl dabbles in magic and attempts to perform a dangerous spell to save a beloved member of her family. When things go wrong she gets, “a much-needed assist” from Sabrina in the crossover event. “Everyone on set lost their minds,” Aguirre-Sacasa said of filming the episode, “I think fans will too. It’s really fun and special.”

Season six of Riverdale drops on November 16th with a special five-episode premiere event. After that, additional episodes will be released following a short hiatus. With that schedule in place, fans can expect to watch the highly-anticipated crossover event in early 2022.