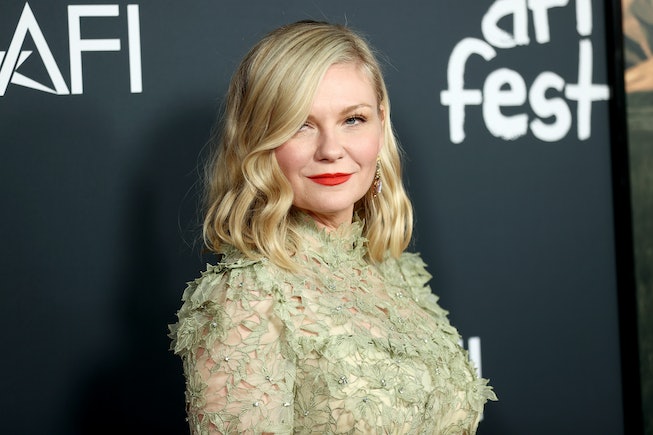 Kirsten Dunst reunited with Jamie Dornan, her co-star from the 2006 film, Marie Antoinette, for Variety's Actors on Actors series. At just 22-years-old, Dunst starred as the fallen French aristocrat herself, and delivering an iconic performance that made the Sofia Coppola-directed film a cult-classic. Though often regarded as one of Dunst's best roles, the actress remembers the experience of filming it somewhat differently. During their conversation, she revealed feeling particularly uncomfortable shooting the film's racy scenes.

“All of our stuff was like making out, and I’m not comfortable with that. It’s never comfortable, ever,” Dunst said to Dornan. “I think my first time I even showed my breasts was with Sofia,” Dunst recalled. “She never used the take, and I don’t think you were there. I felt overwhelmed too.”

Dornan, who played the dreamy Count Axel, was surprised to hear about Dunst’s discomfort. “You handled it well,” he said. “I thought you were in control of everything.”

Following its release, Marie Antoinette received mixed reviews, largely for being a contemporary adaptation that felt more like a coming-of-age film than a historically accurate biopic. The now-beloved movie followed the tumultuous life of Marie leading up to the French Revolution. While the film followed Antoinette’s plight as a young queen in the midst of a social uprising, it was also about a steamy love affair between Marie and Count Axel (Dornan).

Dunst did not reveal if the set had an intimacy coordinator, as they’ve only recently become popular in the film industry. While on set, the coordinator’s job is to look after actors who have to film sex scenes. They help choreograph the scene while establishing boundaries and consent, to ensure everyone feels comfortable.

HBO was the first network that committed to using intimacy coordinators, following the #MeToo movement. Since then, more television networks, and film studios, have followed suit to keep actors safe on set.

Since filming Marie Antoinette, Dunst has appeared in a myriad of movies including, the Spiderman franchise, All Good Things, Bring it On, Silver Linings Playbook, and The Anchorman. In her most recent film The Power of The Dog, Dunst starred alongside her husband, Jesse Plemons. The two played fictional love interests in the Western drama, which follows a disgruntled rancher. The Power of the Dog was released on November 17th, 2021, and is available to stream on Netflix.