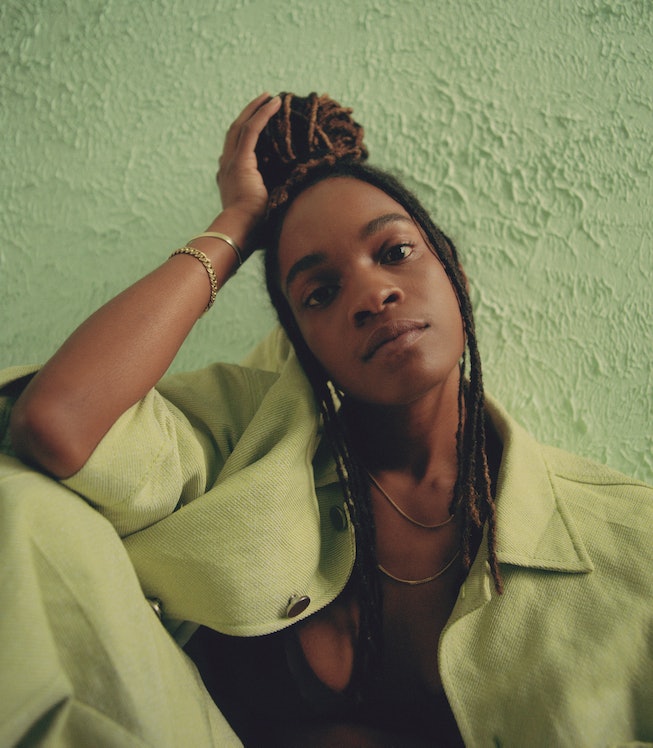 On the gray, frigid afternoon I meet the reggae phenom Koffee, the weather in New York City could reasonably be described as “the opposite of Jamaica.” The 22-year-old has just finished having her photo taken in a drafty former convent in Queens, and she is appropriately bundled up in a fresh pair of October's Very Own (OVO) sweats, a gift from the Drake-affiliated Jamaican DJ Creep Chromatic, with whom Koffee had performed on The Tonight Show Starring Jimmy Fallon the night before our interview. Having spent most of her life in balmy Spanish Town, Koffee seems unaccustomed to the East Coast winter. The first order of business is finding a room with a working heater — no small feat in this strange and not-not-haunted place. After opening countless creaky doors, we find what we’re looking for, and the musician born Mikayla Simpson curls up on an ancient-looking green velvet couch next to a hissing radiator. As soon as we start talking, though, Koffee proves to be her own source of contagious warmth, a radiant presence that echoes the upbeat ethos of her music. “One of the greatest things about reggae music,” she says, “is that it’s a music of upliftment. Reggae music is about speaking of experiences in a positive light as much as possible — or even when you speak of a negative experience, you bring it back around to a place where you can feel at ease.”

Koffee’s unbothered outlook has come in handy over these past two years, as her rising career came to a sudden halt. In January of 2020, after a whirlwind few years of triumph after triumph, Koffee made history when she became the first female artist and youngest person ever to win the Grammy for Best Reggae Album. Not bad for a five-song EP from a 19-year-old who had only started posting her music online a few years prior. But the pause brought on by the pandemic, Koffee tells me, was one of those negatives she could easily spin into a positive. Actually, she admits, “it felt like a little bit of a relief.”

“When it came to my accomplishments, I wasn’t really acknowledging or processing them 100%,” she says. “I was just kind of going through it: Today I accomplished this, tomorrow I have more work to do, and I’m just gonna keep on going. The downtime allowed me to process it a little bit and put things in perspective. I’ve found even more purpose in what I’ve been able to do and my abilities. It has shown me my role of uplifting and just being that source of light.”

The pandemic also inspired her July 2020 hit “Lockdown,” a refreshingly breezy anthem for that long summer of our discontent. “Where will we go when the quarantine ting done and everybody touch road?” Koffee asks on a bouncy earworm of a chorus. “Lockdown” is the final track on Gifted, Koffee’s beyond-long-awaited debut album. An eclectic mix of dancehall, pop, reggae, and a bit of Afrobeat, Gifted is an homage to her musical heroes (the album opens with a sample of Bob Marley’s “Redemption Song”) and a genre-hopping missive from a new, open-eared generation. “I think I can expand the sound [of reggae],” Koffee says. “I can try different genres, try different styles or approaches that I know people are enjoying, kind of meet them halfway. Keep the message positive and just try different sounds to keep everybody entertained.”

Raised by a single mother, Koffee was considerably younger than her mother’s four other children, so, she says, “I was raised kind of like an only child.” As a result, she and her mom Jo-Anne Williams still share a deep bond — as evidenced by Williams’ exuberant and amazingly-named Instagram account @jojothekoffeemaker. (A recent meme, posted on Koffee’s 22nd: “I can’t keep calm, it’s my daughter’s birthday.”) “She’s my biggest, biggest, biggest supporter,” Koffee says. “She roots for me.” When Koffee told her she met Tracee Ellis Ross at Fallon, “Mommy almost fell over.”

“I can try different genres, try different styles or approaches that I know people are enjoying, kind of meet them halfway. Keep the message positive and just try different sounds to keep everybody entertained.”

Koffee started playing guitar and writing rhymes in her early teens. At first, she says, “it was very basic lyrics — like rhyming cat-bat-rat.” She laughs. “I was working on it pretty much every day, while I was in class. All my notebooks would be filled with lyrics instead of actual notes.”

Then, in August 2017, when Koffee was 17, she uploaded a heartfelt acoustic song she’d written called “Legend,” a tribute to Jamaican hero Usain Bolt. A few short hours after it went up, Bolt reposted it and the song went viral. “My mom and I were so excited, we were screaming in the house,” she says, smiling at the memory. “I wanted him to see it, but I didn’t know he would repost it.” Producers started hitting her up, and one of them worked on her official debut single “Burning,” which came out a few months later. The Grammy-winning EP Rapture, which featured the driving hit single “Toast,” followed in 2019. In the music video — which has a whopping 195 million views — Koffee shows off her hometown and her endearingly laid-back sense of style: cherry-red overalls and low-top sneakers, a striped tee paired with corduroys, and a mouthful of glinting braces.

Asked about her personal style, Koffee takes the opportunity to voice “a perspective that doesn’t get highlighted a lot.” She continues, “Growing up in Jamaica, we have access to a lot less. Not that we’re, like, under a rock, but when it comes to the latest fashion trends, we’re more like, ‘What works?’ We don’t necessarily have the newest things, so we’ll rock what’s available. I’ve developed a simple style based on that: sweatpants, hoodies, stuff like that. But I think my style is growing a little as I experience different things.”

Quite a few new life experiences are on the horizon. As she prepares for her first Coachella set, her longest headlining tour yet, and a coveted slot opening for Harry Styles, Koffee is eager to soak up all she can from other musicians. “That’s something I’m looking forward to, being around people who I can take advice and inspiration from,” she says, “to become a better artist and better my craft in every way possible.”

When I use that as a segue to ask about the persistent rumors that she’s worked with Rihanna — possibly on her mythically anticipated ninth album — Koffee suddenly becomes coy. “What I’m going to say is I haven’t met her physically yet, but I look forward to it,” she says, flashing a wide, braces-baring grin. “As Jamaicans,” she adds, “we loooove us some Rihanna.”

Like any superstar in training, Koffee’s got a busy day ahead of her. But before she decamps for (hopefully) warmer pastures, she leaves me with a few more encouraging words when I ask what the album title Gifted means to her. “It’s just to remind everybody, listen, once we have life, we’re gifted,” she says. “Life is a gift. We say that so loosely and randomly, but since it’s a gift once you’re alive, you already have the power to do whatever.”