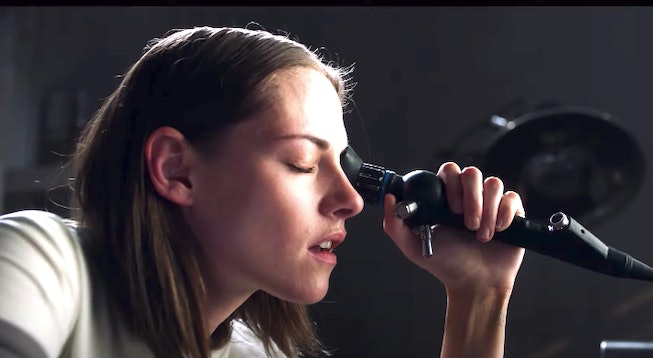 Though she may have won awards for her recent portrayal of Princess Diana in Spencer, Kristen Stewart’s latest role is much, much darker. Neon has debuted the official trailer for Crimes Of The Future, the new film from director David Cronenberg starring Stewart, Viggo Mortensen, and Léa Seydoux, and it is, in a word, creepy.

The official Crimes of the Future synopsis from Neon reads: “As the human species adapts to a synthetic environment, the body undergoes new transformations and mutations. With his partner Caprice (Léa Seydoux), Saul Tenser (Viggo Mortensen), celebrity performance artist, publicly showcases the metamorphosis of his organs in avant-garde performances. Timlin (Kristen Stewart), an investigator from the National Organ Registry, obsessively tracks their movements, which is when a mysterious group is revealed… Their mission — to use Saul’s notoriety to shed light on the next phase of human evolution.”

The trailer for the film includes such enduring images as a man with multiple ears attached to his head and a stomach being ripped open. Amidst all that grotesqueness comes a warning: “The world is a much more dangerous place now that pain has all but disappeared.”

Crimes Of The Future is set to compete for the Palme d’Or at the upcoming Cannes Film Festival, and marks Cronenberg’s first feature directorial effort since 2014’s Julianne Moore-starring Maps To The Stars. It’s in line with Cronenberg’s earlier, sci-fi/horror work like 1999’s Existenz. Cronenberg is known for stomach-churning fare like A History Of Violence and The Fly, and Crimes Of The Future is clearly not for the faint of heart.

Crimes Of The Future will premiere in US theaters on June 3, 2022. Until then, watch the trailer below: