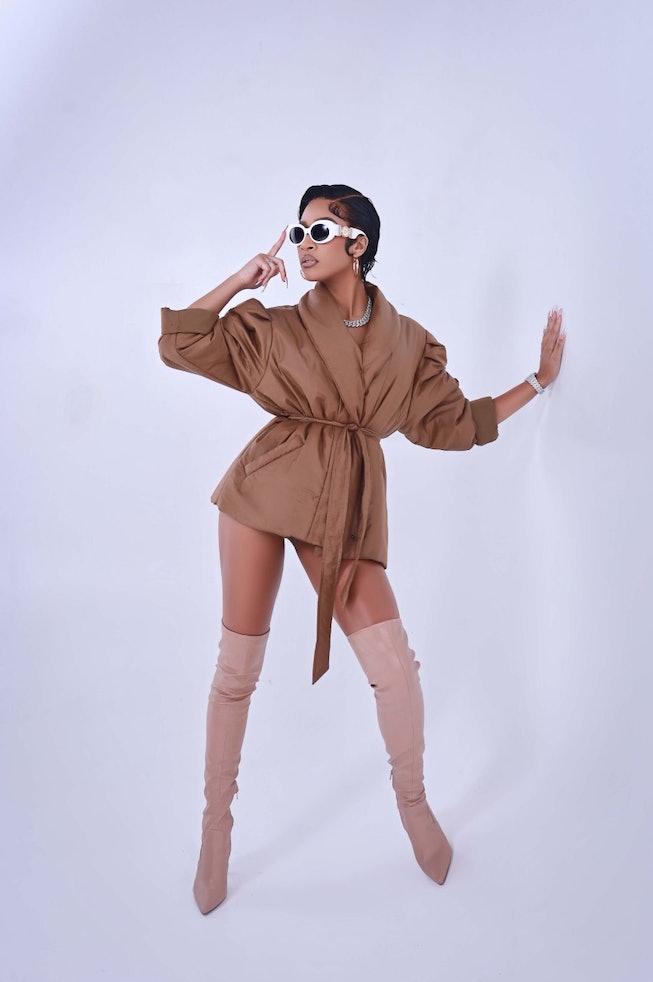 Lakeyah is a rap wunderkind. At just 21 years old, she’s mastered the art of “braggadocious” music, with lyrics that’ll awaken your fiercest alter ego. “It’s very Midwestern, it’s very luxurious, that’s just me,” she said. “I like talking shit, excuse my language, but that’s me.”

Her most popular track, “Mind Yo Business,” opens with a clear directive. “First off bitch, mind your business,” she hisses over the thumping beat. It’s a strong, if not jarring introduction for new listeners. If you didn’t know who Lakeyah was before, tune in and meet a confident songstress who will say just about anything — like, “Attitude on ‘fuck you, pay me’/ It take more than a Bentley to date me.”

Though she’s just recently gained viral attention, Lakeyah has been rapping since she was 14. The Milwaukee, Wisconsin native says her music is a reflection of her hometown, and she largely credits her community for her success. “I started to see the support I got from just dropping freestyles, and I was like, ‘I really want to be a rapper,’” she recalled. “A rapper, rapper.”

After graduating high school, Lakeyah moved to Atlanta with her girlfriend. She enrolled in college to appease her family but dropped out during her first semester to focus on music. Without classes to attend or exams to study for, she was able to fine-tune her sound, dropping a mixtape and getting signed to “the hottest label out of Atlanta,” Quality Control Music — home to Migos, Lil Baby, the City Girls, and Lil Yachty. “It seemed like it happened fast, but it was a lot,” she said. “It was a lot of grinding.”

Since then, she’s performed at Rolling Loud in Miami, signed onto BET’s new docuseries, The Impact ATL, and collaborated with Latto (“Mind Yo Business”) and Flo Milli (“Maneuver”) for her latest EP, No Pressure Pt 2. This fall, she’ll embark on her first tour.

The No Pressure Tour kicks off November 4th. To celebrate, Lakeyah spoke with NYLON about her burgeoning career.

How did you know it was the right time to drop out of school?

Do you think your family is happy with your decision?

Oh, for sure. Everybody was so supportive, especially to see me get signed to a label. That's crazy, especially coming from where I come from. I'm from a really small city. I'm sure you don't know an artist that really blew from Milwaukee.

How did you stay motivated as an independent artist back then?

I definitely stayed motivated because of my supporters. Every time I would drop a freestyle, whether it be in my car or in my bedroom, I would get so much support from them. They would flood people's comments with my name. I would get celebrities in my comments.

I just went down my timeline recently and I saw that Rod Wave was commenting on my stuff years ago when I was 16. I'm like, "That's so crazy." It's always been my supporters for me and the dream that I have. I knew I was going to be big.

Who is your biggest inspiration?

That music was so dramatic with all the R&B and crying music videos. Do you think that time period informed your writing process?

Definitely. Another person that I want to throw in there is Tink. I listened to a lot of music where I could just express myself — and plus the fact that I was on a poetry slam team, it was just expressing myself. I just said recently, "I want to make a video crying in a rain," like “Rain on Me” by Ashanti. I want to bring that type of music back. We don't have that drop-down-to-our-knees music anymore, especially in the R&B field.

How are you preparing for your first tour?

I'm doing a lot of running on the treadmill to get my breathing together because my sets are longer than usual this time around. And obviously, we're working on how I want my stage to look and what we want my dances to look like and their outfits. I love fashion. I love being fashion-forward. So I'm getting prepared. It's going to be a good one.

Why do you think your fans are drawn to you?

I think they can relate to me. I'm very, very, — like I was saying — vulnerable with my tracks. I'm young, I'm going through the same things as them, and honestly, they've seen me blow up.

I've been on YouTube and Instagram and Facebook with my talents since I was 14, 15, years old. So they're very supportive and they've been here for a long time. I think I'm very relatable.

What would you say has been the biggest highlight of your career?

I say this often, but I really, really love the part of my career when I was picked to be an XXL Freshman. I just was in awe because I've kept up with the XXL situation since before the iconic era of 2016. So I was just in awe and I came there and I didn't play. I was like, "This is something that I'm going to see forever and people going to talk about forever. So y'all gonna hear what I got to say."

I feel like female rappers are always compared to and pitted against each other. How did you make space for yourself in the industry?

Honestly, I just stuck to what I know. Coming from Milwaukee, we have our own sound. It's very Midwestern, it's very luxurious, it's braggadocious. That's just me. I like talking shit, excuse my language, but that's me. And I feel like people respect me for it because, now, when they hear a Midwest-type beat, they like, "Oh, that sound like something Lakeyah would be on."

I just really stuck to what I knew. I branch out sometimes because I live in Atlanta now, and I hear a lot of the sound. A lot of the producers out here produce the type of sounds that I be hopping on, like “Mind Yo Business.” Another song is “Poppin,” with Gucci, and it's very Atlanta. But I'm bicultural because I'm out here, too. And I'm signed to QC [Quality Control Music], so I'm feeling they vibes too.

Are you working on an album?

I just dropped an EP and I'm not very big on rushing projects, but I'm always working on new music. I have a thousand songs in a vault, but when it comes to an album, it's going to be my debut. So I want it to be a great body of work, something like Take Care by Drake.

What advice do you have for young musicians?

To stay consistent. The biggest thing you can do is stay consistent. And I know it's cliche to say, but believe in yourself, because breaking off into the industry was something that was so hard.

I may make it look easy, but it was so hard because I had to really believe in myself, how I looked, and my sound. Especially as a female rapper because, like you said, they pin us against each other, and they specify where we are supposed to be. So just believe in yourself and stay consistent.