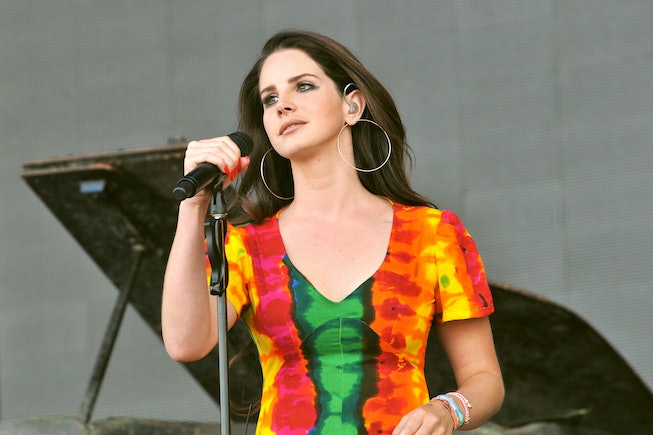 Lana Del Rey had a very busy election night. Besides getting into a brief Twitter spat with a fan who accused her of voting for Trump early Wednesday morning — "Go. Fuxk. Yourself," she tweeted in response — the singer also shared a video of her covering "You'll Never Walk Alone" from the musical Carousel, and announced that there will now be a 16-week delay for her next album, Chemtrails Over the Country Club.

Rey has been teasing the follow-up to her critically acclaimed 2018 album Norman F*cking Rockwell! since May, estimating that the project could be released as soon as Dec. 10 of this year. However, during an IG Live from Tuesday evening, where it appeared she was broadcasting from an outdoor Denny's location, the singer stated that the album likely won't be out until 2021 due to a delay in vinyl production. In the interim, she announced she'll be releasing a different digital record, American Standards and Classics, expected to arrive around or on Christmas.

"Chemtrails Over the Country Club, right... 16-week delay on the vinyl process so in the meantime I'm going to give you a digital record," she said while sipping from a Denny's coffee mug. "American Standards and Classics for Christmas. Because I can't get the record plants to open until March 5."

She adds that she also recorded a "beautiful a capella" version of "You'll Never Walk Alone" for an upcoming documentary about the Liverpool Football Club. Rey posted a video of her singing the cover to her social media a few hours prior on Tuesday night. The song, originally a show tune from the 1945 musical Carousel, is the official anthem of the sports team, and as of late, has also emerged as an anthem for frontline workers combatting the coronavirus pandemic in some areas of the U.K.

Meanwhile, the singer has kept a relatively low-profile after fans online criticized her for wearing a mesh mask to an in-person fan book signing event in October. She was promoting the release of her first published collection of poetry, Violet Bent Backwards over the Grass, for which a part of her advance, as she also quietly revealed Tuesday night, she donated to the Navajo DigDeep Water Project.

"I personally have always believed in personal reparations to give back to the people who have shaped our land.I look forward to updating you on the rest of the donations that we make throughout the year," she wrote on Instagram.

Watch her cover of "You'll Never Walk Alone" below.