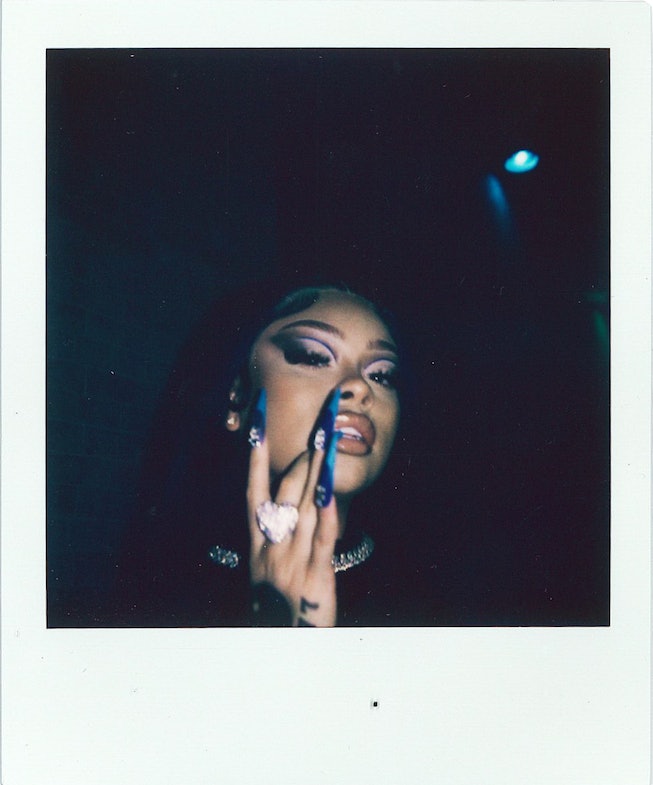 Latto is running late. The rapper was scheduled to be on stage half an hour ago, but she’s only just now emerged from hair and makeup, quietly making her entrance from backstage at the Brooklyn venue Warsaw. Though it’s nearly 10 p.m. and the lighting is dark, she hides her eyes behind a slim pair of black sunglasses. Combined with her black mesh and velvet bodysuit, long black hair slicked back, and nails a flashy cerulean topped with crystals, she looks primed to compete in a luxe motorcycle race. Her team seems to think so too. The stage can wait a little longer — it’s time to get some pictures.

Outside, under a single fluorescent light, Latto poses professionally as a team of three photographers (and me) hurriedly snap photos each time she moves a limb. There’s good reason for this rabid documentation: tonight’s April 15 show, in support of her sophomore album, 777, released in March, is part of her first-ever headlining tour. After nearly six years grinding in the industry, it’s a big deal for the 23-year-old Atlanta native. And there’s arguably a bigger moment — and stage — ahead. Come September, Latto will hit the road for two months to open for Lizzo on her North American arena tour. It’ll mean bigger stages, bigger crowds, and even more people knowing Latto’s name.

“I've been working out every day trying to get back in shape and prepare myself for that stage, because the arena stages ain't no joke,” she says of the tour over a phone call in May, a few weeks after her NYC show and the tour has wrapped up. “At this point, I'm just grateful to be here, so nothing really intimidates me anymore. I don't even get nervous. I just be like, ‘Well, I'm going to just give it all I can.’”

Though Latto’s name may still be new to some, it’s already paired with significant caché. Over the past 10 months, her vibrant breakout single from 777, “Big Energy,” has propelled the rapper into mainstream status. In Brooklyn, the song’s addictive, sugary beat — sampling Mariah Carey’s “Fantasy” (which samples Tom Tom Club’s 1981 original “Genius Of Love”) — spills out of grocery stores, bodegas, and through passing car windows. On the charts, “Big Energy” has spent 35 weeks on Billboard’s Hot 100, peaking at No. 3. And for a different metric of Latto’s rise: last September, when Latto first debuted “Big Energy'' at the MTV Video Music Awards, she performed the song between commercial breaks for less than two minutes on a side stage. At the 2022 BET music awards, she was given four, and even brought out Mariah Carey, taking home the Best New Artist award later in the night.

The effects of her ascent have been a little humorous to the rapper. “I just signed up for this new gym out of state, and I was very low key, whatever. While I'm taking this class, they start playing ‘Big Energy’ on the little workout playlist. They don't even know it's me right there working out right next to them,” Latto says.

In May 2021, as if foreseeing the ascendant months ahead, she announced a name change from her controversial previous stage name Mulatto to Latto. At the time, in a song released accompanying the announcement, she said that the name — which some people criticized as a racist slur — “Contradicted what I stand for/ The backlash ain’t what I planned for,” and anointed the moment as the start of a new chapter.

“Before being an artist, since eight years old, 16 years old in the rap game and stuff, I've always had people having a say on my career or how I dress or how I rap,” she says of her past era. “Now it's me being me and spreading my wings and just pushing myself and just seeing how far I can take this for real. The new chapter is really just a reflection of me growing up as a woman and growing up as an artist.”

As Mulatto, Latto — real name Alyssa Michelle Stephens — had already experienced a series of breakthroughs. After coming up under her former name on the 2016 Lifetime reality television show The Rap Game at 16-years-old, she scored her first hit with 2019’s “Bitch From Da Souf,” a minimal hard-rap track repping her hometown that made her drawling flow the star. “I’m a real ass, rich ass, bitch from da south,” she rapped. She gained another, smaller moment with her 2020 song “Muwop,” a spitfire rap track with Gucci Mane that paved the way for her surprise cameo in Cardi B and Megan Thee Stallion’s “WAP” music video later that year.

Loyal fans will notice that the songs on her new album lean much poppier, with songs like “Big Energy” and “Sunshine” built around a sing-songy melody. The sonic shift, Latto says, was intentional and a result of seeing the success that “Big Energy” initially incited.

“That Southern trap beat with me just flowing on it, that's never going to go nowhere.”

Still, Latto is adamant that the expansion of her sound doesn’t mean she’s turning her back on her Southern rap roots. “For every song that I'm trying something new, I'm going to follow up with something from my core and my sound that got me to where I am,” she says. “That Southern trap beat with me just flowing on it, that's never going to go nowhere.” On 777, that core can be heard on tracks like “777 Pt. 1,” “777 Pt. 2,” and fan-favorite “Soufside,” her updated addendum to “Bitch From Da Souf” that bursts with more attitude and lyrical finesse.

Perhaps the biggest change for Latto in her newly bolstered position is the heightened scrutiny of having more eyes on her every move. As a now high-profile female rapper still maneuvering through a male-dominated genre — in terms of both her peers and those consuming the music — she experienced that scrutiny first-hand earlier this year when she revealed during an on-air radio interview that an unnamed male artist made it difficult for her to clear his feature on her album because she didn’t respond to his DM on Instagram. “It's been difficult to deal with these men. They don't know how to keep it business,” she said on the radio show Big Boy's Neighborhood at the time.

The interview blew up into a major point of discussion online as media outlets covered the story, and fans began speculating who the male artist could be. Fingers were pointed at Florida rapper Kodak Black, and spurred him to release a statement on Twitter denying any involvement. Others accused Latto of clout-chasing. A few days later during an appearance on The Breakfast Club, Latto expressed regret for saying anything at all, and said she wasn’t trying to “make this a whole thing.”

However, months later when reflecting on the situation, Latto now stands by her decision to speak up. “That situation I decided to speak on, it was twisted into a clout chase moment, wanting attention. I even seen comments about it being strategically done. But I was just doing the interview and they asked about the process of recording the album thus far and that was something that was on my mind and that's what I spoke out about. I didn't care to associate a name with it, because my intention wasn't to get anyone canceled,” she says. “It was literally just me speaking about my experiences and giving people a little insight on how it goes. Maybe for the next female rapper coming up that might look up to me, just letting her know, ‘Hey, they're not always fair in the game.’”

For Latto, the incident was further proof that there’s still a long way to go for female rappers in the industry. “When you see a female rapper on these festivals or on these playlists, these Apple Music, Spotify playlists, or you see them in the Top 10 on Billboard, just know that it took a lot of sh*t behind closed doors that y'all don't know about to get in those same positions as her male peers,” she says.

Moving forward, Latto says she’ll “tread lightly” on what she’ll say but she won’t censor herself. “I've never been the type to suppress my feelings for the world,” she says. “I know what I meant and what my intentions were, but I think I just got to be more conscious about how I say it so that [people] can't flip it.”

At the end of the day, it’s these core beliefs and pillars of her identity that got Latto to where she is, and she’s determined to not compromise them. She still reps her hometown, Atlanta, hard, and sees herself as a future face for the city. “When you think of Latto, you associate her with Atlanta,” she says, hopefully.

Midway through her NYC show at Warsaw, after bantering with the crowd, Latto shouts out her OG fans before blasting into “Bitch From Da Souf,” which completely brings down the room. Blunts are getting sparked, and everyone’s shouting the words. With Latto surrounded on stage by life-sized piles of poker chips (a nod to the close homophone “lotto”) and a team of back-up dancers, it’s a stunning contrast of where she’s been and where she’s going. Sure, Latto may be bigger and better but at the core she’s still the same.

“I think my come up has been very genuine and authentic,” she says. “People [have] seen me grow up before their eyes either since The Rap Game, or ‘Bitch From Da Souf.’ Wherever they first discover me, they can go back and do their research and see like, ‘Oh, she really worked hard to be where she's at right now. No funny business, no industry plant.’”