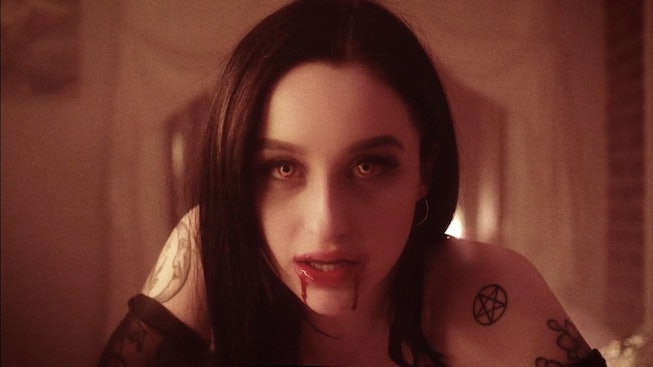 The first single rising bedroom-pop singer Lav ever put out was shouted-out by Billie Eilish. Called "From Me, The Moon," it's not hard to understand why. Its spare and delicate instrumentation paired with the Venice, California native's haunting vocals makes for an intimate and lovely song about orbiting space objects; "Is the moon still in love with the sun?" she wonders. On Thursday, NYLON premieres Lav's follow-up single "Wavvy," a just-as-slow-burning love song — this time told through the illicit nighttime activities of vampires.

In the Marielle Boland-directed video for the song, Lav floats around a curtain-draped boudoir, serenading her sleeping lover before finally descending upon him in a bloody frenzy. All the while, "Wavvy"'s soft, looping melody plays in the background like a spell.

Of "Wavvy," Lav writes candidly in an email: "'Wavvy' is an anthem of sorts. If you listen closely the lyrics are actually quite sad. I wrote them after I feared I had compromised a relationship by not waiting long enough to have sex, as if my worth as 'a girlfriend type' would die out if I had sex too early, which looking back on is about the dumbest thing I’ve ever heard; but alas the mind plays tricks. If you want to have sex, have sex. I gave that boy too much credit, if thats all I was to him, a warm body... yikes. How embarrassing is it that he had my attention for a fleeting moment, and didn’t take the opportunity to keep it? VERY embarrassing. Which is where the video comes in. I think we all have a little bit of revenge fantasy in us, and we could all only wish it happened in a vintage pink boudoir scene."

You grew up in Venice, CA. What was your childhood like?

Free, barefoot. The smell of weed and the sun remind me of home. The smell of dogs, dirt, warm pavement, dust, the beach... it all reminds me of home. I grew up in a very different Venice than what people live in today. I remember having to lie about living in Venice because I was afraid people would know I was poor and lived next to the projects. But there was something incredibly beautiful about the culture of Venice in the '90s and early '00s, as if everyone in the city was connected in some way, in their addictions or faults, through art or music. Venice will always be home, until the very last liquor store is made into a Pressed Juicery.

You shared your first song on Twitter. What do you think is the advantage of sharing music this way vs. more traditional platforms?

I think since I had already built a platform based off of just saying stupid kinda-funny things, people were already interested and it definitely gave me a leg up.

What was your reaction when you saw that Billie Eilish shouted out your song?

Immediately I thought I was dreaming. I was in a cinema watching a scary movie, and my sister had texted me saying Billie put my song on her story and genuinely just didn’t believe it.  And to see that Finneas had also said he loved it was insane. The both of them are so incredibly talented, to have that pair even give my stuff the time of day is incredible.

Who are some musicians that you admire?

Since the start of quarantine, what's a weird or easy snack you've been making, and how do you make it?

I’m not sure how weird it is, but I got a twelve pack of giant hot pickles and I'm choking my way through them. Each bite is a punishment that I feel like I deserve. It's battery acid but my tongue craves the familiar sting. I also have been eating a lot of Hagelslag, which is a little Dutch treat. White bread, butter, and the 'slag, its about the only thing I look forward to in these dark times.