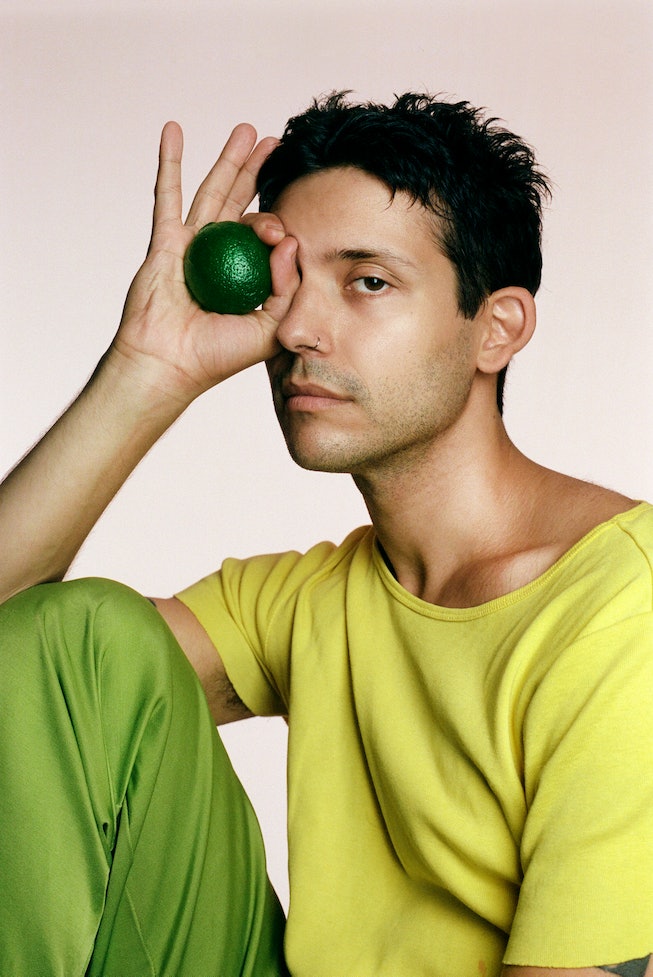 Having a crush is equal parts fun and devastating, a feeling Brooklyn native and singer-songwriter Liam Benzvi captures perfectly across his debut LP Acts of Service, out February 18. It’s an album filled with lovesick croons and shimmery shoegaze rock that’s as sweet and seductive as a forehead kiss.

Lately, Benzvi, who was formerly the frontman of indie pop band Strange Names, has been thinking a lot about the five love languages: words of affirmation, physical touch, quality time, acts of service, and gifts. Acts of Service is named for the love language he gives. The one he receives is words of affirmation, both fitting and agonizing for an artist about to release an album into the world.

“I finally got a team of friends and collaborators around me to bounce ideas off of and that was enough for me,” he tells NYLON. “It wasn’t so much about, ‘do you think it’s good or not?’ It was more about having someone to call in the middle of the night, because I had an idea and that’s the words of affirmation that I needed.”

The result is a gorgeous album with glittery Sonic Youth-style guitars, yearning melodies that bring to mind The Smiths, and ‘90s boy band croons that capture the universal feeling of lovesickness. Though the songs are personal, Benzvi also plays a character for much of the album, relying on real feelings of longing and jealousy mixed with real-life observations. “There’s nothing that keeps you young like pining for something,” Benzvi says.

NYLON spoke with Benzvi ahead of the release of Acts of Service about how he’s inspired by Summer Walker and The Smiths, the era in music when men weren’t afraid to have pretty voices and, of course, love languages.

I’m so interested in this idea of acts of service. When did love languages become a part of your life?

As far as it being the title of the record, I was going back and forth between it because I didn’t want it to come off lame like astrology, like, ‘I’m naming the record Virgo because I’m a Virgo.’ Ultimately it felt like the realest representation of what the record would be. I’ve always recognized [love languages] in myself and in the last three years when I started going to therapy, because I’m so much a people pleaser and it goes deep into my inner child work that I’ve had to excavate with my therapist. It comes through in my relationships, and my friendships, and my romantic relationships and growing up, getting older. I feel like that’s when I realized what I’m willing to do and what I’m willing to take and how that’s received. I wouldn’t know if I was doing it right if I couldn’t see how it was being received basically.

Your songs strike me as romantic and lovesick but not always necessarily about things that are traditionally romantic. “Get Some” is about you and your boyfriend entering into an open relationship. I’m interested in that contrast.

Yeah, it’s definitely lovesick and part of that is from me and part of that is a character. “Get Some” is very real and it was based on when we decided to become open and I was inspired and I just wrote that. It felt really good and seems to be something that a lot of people can resonate with. A lot of people from my age group and a lot of my friends are in similar situations, and the thing that you reckon with most when you open up a relationship is what’s going to heal you both is when you just put all the focus on the other person and you take it off yourself, so that’s what that song is about.

It’s lovesick, but it’s also a very generous and self-giving song, too.

And at the same time, there’s elements of surveillance in the lyrics. Like, I so deeply want to be a fly on the wall but it’s better that I’m not because that would be destructive, ultimately. Ironically, on basically all the other songs I wrote myself as this narrator character where I am a fly on the wall or I just see myself outside the point of view. I’m one step removed from the point of view of all the other songs, which maybe is a defense mechanism.

People are quick to be like, ‘it must be you,’ or think it has to be autobiographical, but you’re just an observer as much as anything else.

Summer Walker released a record that was really personal and really good and the irony of it all was her boyfriend, who she sings about throughout the entire record, he left her when she was pregnant, he produced the whole record. He was there while she was singing about hating him and she kind of oscillates between playing a character and [not]. That was the best example I could see in a long time of the kind of writing style that I strive to have.

I’m wondering how this all plays out in your performance on stage? In terms of this character or not character – is that something you think about in terms of performance?

Sometimes. I feel like I’ve grown in my artistry to be more vulnerable and myself onstage in recent years, whereas when I was in my old band [Strange Names], we were a rock band and I was the frontman and I really enjoyed being coquettish and coy, which are things I explore now but a little differently. But I very much wanted to be this eccentric rocker and now my writing is a little more tender and a little bit of it is still rock music but there's a softer edge to it so I feel like I’m less of a character live, but more or a character in the content.

“Most artists I talk to just want to fill space. I feel like it's good to [not] do that to let the listener breathe.”

I just started listening to Morrissey again after not listening to him because I was just like, “You’re canceled.” But I looked up to him so much for so long and I still respect him so much as an artist and I will continue to. The Smiths are a huge influence for me, absolutely, and boy bands. I listen to that song “All I Have To Give” by the Backstreet Boys sometimes now, still. It’s so pretty. I just resonate with melodies like that, which were very pervasive in the late ’90s with boyband culture and also with New Wave culture in the ’80s, where I feel like there were a lot of men singing and it wasn’t like now where it’s Bruno Mars and The Weeknd. They have great voices, not knocking them, but there was more diversity in delivery in those decades and in that era.

It was men not being afraid to sound pretty and have pretty music.

Yeah exactly, so I resonate with that and that’s where a lot of the more shoegaze-y sounds come from. It’s these weird melodies layered on top of each other that are emotional, just by the wall of sound of it all, and the more sparse arrangements that feel just as impactful, but like a little less, just stripped back to the bare minimum.

There’s a good amount of both of those on the record. Tracks like “The Verge” are stripped down and are really impactful in the lack of sound, too.

Yeah and that was challenging, especially with “The Verge” and “Get Some,” where I leave a lot of unoccupied sonic space in there. My instinct is always to fill space, but it took a lot to leave it be. I’m really glad I did. Most artists I talk to also just want to fill space. I feel like it's good to [not] do that to let the listener breathe.

Acts of Service is out February 18 on Terrible Records.