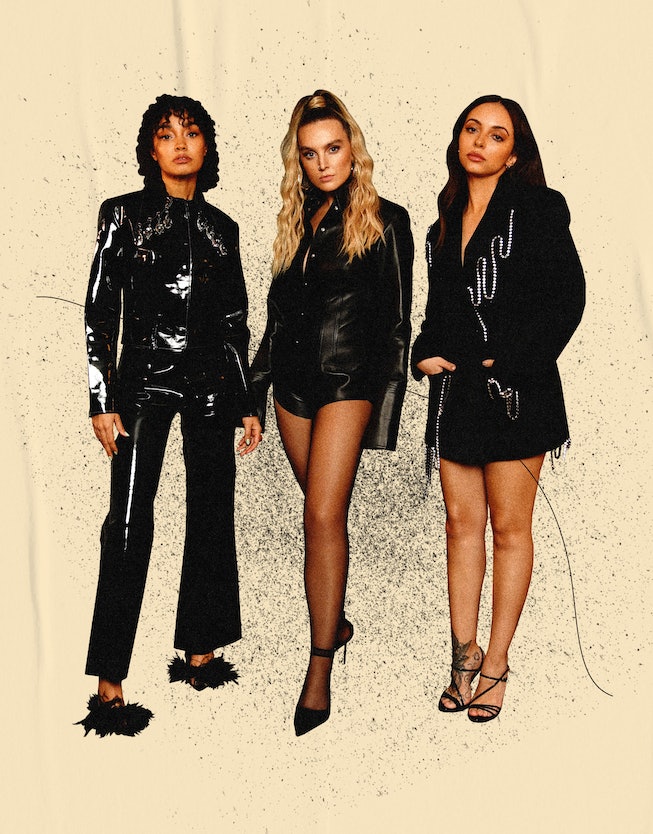 Jade Thirwall has a favorite lyric from Saweetie’s new verse on the remix of Little Mix’s hit song “Confetti”: “I like what she says about cutting someone's dick off and popping it in a stew,” Thirwall says. “That's my favorite line.”

Her fellow bandmates, Perrie Edwards and Leigh-Anne Pinnock, crack up when she recites it over a Zoom call the day before the single officially drops. This happens a lot when talking to Little Mix: random bouts of laughter at inside jokes, and constant support of what the others are saying. That’s because despite a tough 2020 — aside from the global pandemic, which saw their world tour postponed, member Jesy Nelon left the band in December — Little Mix has a lot to be happy about.

In January, the band scored their fifth number one single; a month later, they were named as Glamour UK’s “Gamechangers in Music,” and are currently up for top British Group at the 2021 Brit Awards — not to mention, just days after this interview (their first stateside as a trio), Pinnock will announce that she is pregnant with her first child. “We started 2021 as ‘Sweet Melodies’ went to number one, which was just an amazing pick-me-up after the time we'd had locked down,” says Edwards. “We were just so excited to get back. During lockdown, I think it really hit home how much we missed doing it all, and how much we love it.”

In a way, the Saweetie remix of “Confetti” is a perfect celebration of where Little Mix is at right now: it’s fun, it’s free, and it is, above all, a celebration of girl power. “There’s always room for female empowerment,” Pinnock says. “I think that's what we do best. So we absolutely love having females on our tracks — it's good to have as many females on board as possible when it comes to collaboration. Saweetie on ‘Confetti’ was just perfect. She's definitely someone that we feel like embodies that.” The song itself is a feel-good banger of a pop anthem, ready for the days when we can all actually get to the club again — something the band is conscious of when choosing what music to put out at this time. “Everyone is just ready to go out and have a boogie, and I think we've got some really good songs coming out that [can help] people do that,” notes Pinnock.

Until then, the band has a provided a fake club for the track, thanks to its tongue-in-cheek music video that sees the girls dressed up as their male alter-egos, facial hair and all. While “one of the funniest days of [her] life,” according to Pinnock, the shoot was not without its struggles. “I was like, ‘Oh, this is such a sick idea, can't wait to be a dude,’” says Edwards. “Then the second they started putting the prosthetics on, I literally couldn't breathe. I was like, ‘Oh no. This is a bad plan.’” The concept, however, is something they’ve been wanting to do for a long time, and at this stage, they’re done holding anything back. “We’ve reached this point where we're like, ‘Yeah, let's do anything that we haven't quite been able to execute before, or haven't ticked off our list yet of things we want to achieve as a band,’” says Thirwall.

That mindset comes partly from the past of year being put on hold, but the band’s entire history has also been leading up to it, in a way: this year marks ten years of Little Mix. They’ve got nothing left to prove. “When we first got put together, we were so excitable and a bit naive to everything. We sort of went along with what we thought we should be,” recalls Thirwall. “We were just figuring out who we were ourselves. We had to grow into women in the public eye, which was a lot to take on. In the middle of all that, we had a little bit where we felt constantly scrutinized and judged for who we were and what we sounded like and tried to like gain credibility as a band coming from a reality show, and just being a girl band in general.

“As the years went on, we just started to care less and less,” she continues. “Now, we're at this point where I feel like we've earned the right to be exactly who we want to be unapologetically, and use our voices more than ever, and wear what we want, look how we want, and not really care as much about what other people think.”

When talking about 2021 and what’s to come, the band uses the word “era” often — as in, buckle up Mixers, we are on the precipice of a new era of Little Mix. “We're feeling a lot of creative freedom. We're pushing the boundaries, and we’re doing things creatively that we maybe hadn't done before,” Thirwall says. “We just want to have good energy, good vibes this year.” Adds Edwards: “Sticking together is the most important thing. Sticking together and having each other's back. We would have fallen apart without that.”

“I don't think people can say anything to us anymore — we have stood the test of time,” chimes in Pinnock. “We've been together for 10 years. What band can really say that?”