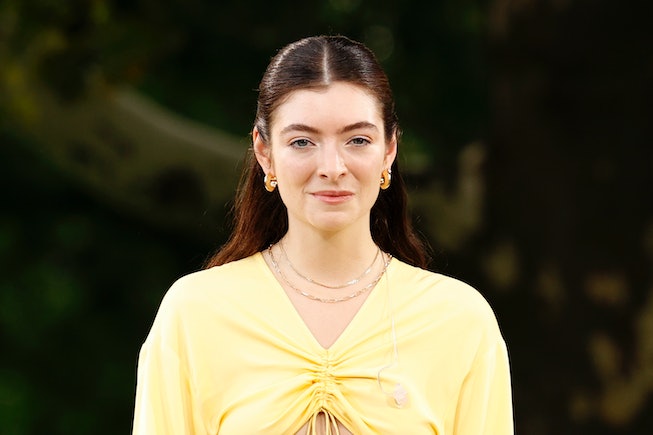 Lorde is not bothered by your opinion of Solar Power, at least not anymore. In her latest newsletter dispatch, the singer celebrated the album’s anniversary and talked about receiving negative reviews.

“It’s been a year since I announced the release of Solar Power,” she wrote. “I can honestly say it's been the year with the highest highs and lowest lows I think I’ve ever experienced.” The album’s premiere marked the end of a four-year hiatus for the singer, who went off the grid after debuting her hit-record Melodrama. The album – written with her Melodrama collaborator, Jack Antonoff – was a fan favorite and is often deemed to be her best work. Its moody sound and intricate story-telling took listeners through a whirlwind relationship that almost anyone could relate to, through the structure of one night at a house party (and the morning after).

Solar Power was a complete change. Unlike Melodrama, it followed a less structured set up and implemented a more mellow feel that apparently fell flat for some listeners. “It took people a while to get the album,” Lorde explained. “I still get emails every day from people who are just coming around to it now! And that response was really confounding and at times painful to sit with at first.” Rolling Stone gave the album a 3.5/5, and described it as Lorde's “quarter-life crisis.” Meanwhile, Pitchfork rated it a 6.5/10 and said, “These songs don’t move like the songs on Melodrama: no startling change-ups, no fireworks, just a spoken interlude by Robyn and a few distracting foley effects.”

Despite the critiques, Lorde seems to be at peace with the project. “I learnt a ton about myself and how I’m perceived by making and releasing this album, and I feel significantly more connected and alive in my art practice and life than pretty much ever before,” she said.

Later in her newsletter, the “Ribs” singer revealed that creating Solar Power, and taking it on tour, has improved her mental state. “Thanks to SP, I’ve been able to work through some big personal stuff that was making it pretty difficult for me to do stuff like travel or play shows without getting completely overwhelmed,” she said.

“I used to sit alone in my hotel room on show days, binge-watching Bake Off, Ambien, and Vitamin D on the bedside, my skin pale, my stomach knotted in fear. These days, I’m out the door in every city, walking for miles, eating gelato after dark, finding tiny wine bars, trying on vintage clothes down secret streets, laughing with friends, and playing better and better shows for you as a result. So yeah. Thank you for all of it.”