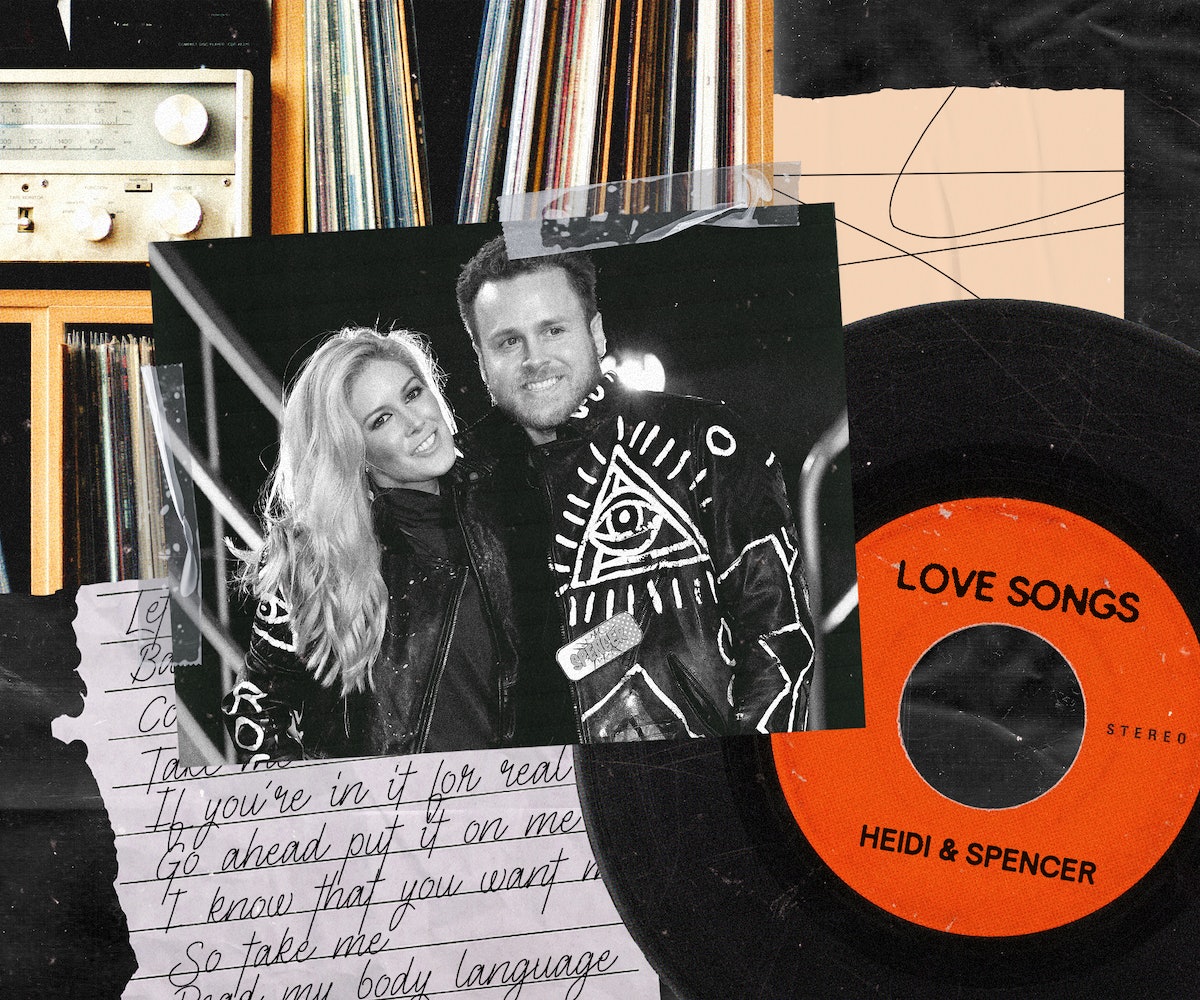 This is Love Songs, a series in which NYLON speaks to the coolest couples out there on how they met, when they fell in love, and the songs that define their relationship.

“I'm not looking at TMZ,” Spencer Pratt assures me, glancing up from his phone. “I literally get 45 texts a second through prattdaddy.com, we do run a crystal business and nobody does anything without a text back. So as much as I love TMZ, I'm not checking TMZ right now.

“It's kind of fallen off, to be honest,” he continues. “Celebrities have just... They're just not doing it for me lately.”

Say what you will about Spencer and Heidi Pratt, but you can never accuse them of “not doing it” when it comes to celebrity. For the last 14 years, the infamous reality TV couple have shared their lives across their time on The Hills — the second season of which’s revival The Hills: New Beginnings is currently airing on MTV — social media, and some infamous paparazzi photos. If anything, they’d like to share more. “I wish our actual love story was [shown],” says Spencer. “I wish our actual real elopement was documented, like us really going to Cabo, not a reenactment of the elopement on camera. I just watched that clip the other day, and I was like, ‘We were way drunker at the real one.’”

Adds Heidi, sitting next to Spencer, appearing on Zoom in front of two oversized portraits of themselves shot by Martin Schoeller: “It’s almost like a misconception. It's weird because people feel like they're such a part of [our story], and they are in such a sense. But at the same time, it is still a secret, so much of what we did and what we went through.”

Here, the reality duo share the love songs that make up their relationship, from first impressions to the pop song beloved by their three-year-old son, Gunner.

“We Takin' Over” by DJ Khaled

Spencer: My first impression of Heidi was, “That girl can dance!” At the time, “Smack That” with Akon and Eminem was big, with the girl dancing in the strip club in the music video and Heidi was rivaling that girl. I was like, “Heidi could be in an Akon music video.” She was out in the clubs seven nights a week. So she got a lot of practice.

NYLON: Who approached who first?

Spencer: It was more Kristin who made it happen. Kristin Cavallari brought us together at the bar, so it was mutual. Kristin was the catalyst.

Heidi: We each had our own VIP tables that night.

Spencer: The song when I think of Heidi at that was part of our existence was DJ Khaled’s “We Takin' Over.” We played that on repeat. That was one. Maybe she wasn't dancing to it, but like in the car, that was a big one.

Heidi: Rihanna was big, too.

Spencer: We played “Disturbia” going to the MTV Movie Awards or one of those things. We're playing it in the car, and then Rihanna comes up on a golf cart next to Heidi and is like, “Baby girl, you're so beautiful. I love you.” And we were like, “Oh my God.” To this day, of every famous person we've ever met, hands down, she probably had the best energy ever. Her and Taylor Swift. They should have a song together. How do they not?

“Dancing With Our Hands Tied” by Taylor Swift

Heidi: We listen to a lot of Taylor Swift songs. I still love “Love Story.” I think that it’s so sweet.

Spencer: For me, “Dancing With Our Hands Tied,” I just... That breaks my heart every time. I love “Dress,” too. Reputation was a life changing album for me. So I don't even go past that.

Spencer: “Your Love Found Me” was one of Heidi’s first songs. Then, even though it's negative, [I love] “No More.” Because it wasn't actually about me, but I felt it so much. I was like, “I didn't do anything!” We faked the paparazzi photos of her crying while we were recording “No More.” “Higher” was our love story because I recorded the music video. Nowadays with YouTube money, we could have retired off of just the hate that video got. So I was ahead of the game by how many views now that you get paid by that. We got zero money for it, but it was the biggest music video.

Our love story really is Heidi's album because we spent all our money on it. Heidi was crying every night because these writers were not playing. It was like a bad movie. Now she's making some serious streaming money off of it. So now it's starting to become iconic. People that didn't even know Heidi from The Hills are listening in the pop world, and they have no connection to like, “Oh, I don't like Heidi.” It's just bangers. I mean, we spent $2.7 million on it — I have the receipts. This isn't a made up number. But it’s got hits, so that's why it's positive [now]. But for a while it was very depressing because she wanted a house in Crested Butte. And every time I think about, “Oh, well you could have a 2.7 million — now $8 million — house in your town, but we have an incredible pop album.

Heidi: For me, it is bittersweet because, obviously, financially I do wish I had, like Spencer said, put it down on a house or a lot or something like that. But at the same time, it's such a priceless moment because it was the first time where Spencer and I could take a step back from the show and become a real team outside of that world. So it was so much of us working together and hustling and thriving, and we had so many great experiences. It was also a great distraction from just the show, which also could have been part of the problem of us not fully focusing like the rest of the cast did. But at the same time, we were part of such a different world that was ours, and that was always really special.

“At Last” by Etta James

Heidi: The first thing that comes to my mind when I think of Spencer is “At Last” by Etta James, because whenever I hear that, that’s how I felt when I met Spencer when he came into my life. That love that lasts. That's what I was waiting for. That's how I feel every time it goes on.

Heidi: I don’t think I’ll ever get sick of it.

Spencer: I could listen to it four billion times.

Heidi: That song was so significant in my life. It was just such a beginning moment for me. We almost had a different theme song. It was another Hilary Duff song, since this was right after Laguna Beach.

NYLON: Do you have any other favorite music memories from the show?

Spencer: I’ve told this story a million times and I'm still waiting for Ryan Tedder to thank me. He literally gave us the demo — what was that stupid song called? “Too Late to Apologize.”

Heidi: Yeah, because he was going to write that song for me.

Spencer: He gave me the demo because he was going to write a song for Heidi, but Hilary Duff stole it when she heard Heidi wanted it. And it didn't even do well for her, such is karma.

Heidi: “Reach Out and Touch Me.”

Spencer: Rookie. So I took [“Too Late to Apologize”], gave it to the executive producer, and they put it into The Hills, and that song became platinum monster hit when The Hills was getting, like, five million viewers and he never thanked me, never did once. So if I ever see him in person, he should probably jog because I'm going to be like, “Pay up buddy.” Because I need money.

NYLON: What would be your theme song if you had your own spinoff?

Spencer: “Hit ‘Em Up” by Tupac. I just feel like that's the energy that Speidi would have coming into the game. Realistically, since we couldn't get the rights to that, and I think we could get the rights to this because we're friends with them is 21 Savage's “Famous.” It sounds family friendly, but then when 21 comes on, it has the energy of Speidi. All through our fame, all we listened to is trap music. That was our energy.

NYLON: What songs come to mind when you think about those early nights when you were having the most fun?

Spencer: I could go get my iPod.

NYLON: You still have your iPod?

Heidi: Oh, it's got bangers on it.

Spencer: It’s not charged. But I’ll email you what songs are on here.

NEXT UP
It Girl
Madison Bailey Is Embracing The "Elegance" of Being in Her Mid-20s
A Night Out
A Night Out With Rachel Bilson
Culture
Phoebe Dynevor Will Not Return for Bridgerton Season 3
Culture
Netflix Is Seriously Cracking Down On Sharing Passwords
Style + Culture, delivered straight to your inbox.