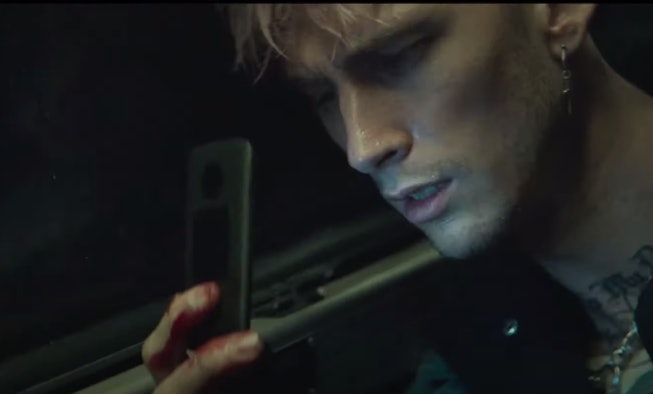 Stealing from a crime ring almost never ends well, but in the trailer for One Way, Machine Gun Kelly tries to beat the odds. In the upcoming action film, the rapper (otherwise known as Colson Baker) stars as a wounded ex-con who goes on the run after stealing from his dangerous boss and her lethal henchmen.

According to the synopsis, Freddie (Colson) hops on a greyhound bus after suffering a bullet wound to the gut. With a bag of drugs, stolen cash, a gun, a bleeding torso, and a thinly veiled plan, he attempts to survive the night and make it to the California desert for a life-saving surgery. But his already dire circumstances are further complicated by the other people on board.

One passenger appears to be just as dangerous as the people chasing him, while a nosy teenager finds herself in the middle of the action. To make matters worse, Freddie’s friends have been captured and his seedy coworkers warn that his family is up next if he does not surrender. From the looks of the trailer, One Way is a nail-biting race against the clock where everyone’s lives are on the line. “You need to come back,” his boss demands, “you made a big mistake.”

The upcoming film was directed by Andrew Bard and written by Ben Conway. It features a mixed ensemble of performers, including Storm Reid (Euphoria), Kevin Bacon (Footloose), Drea De Matto (The Sopranos), and Travis Fimmel (Vikings).

Fans of Baker’s won’t have to wait long to watch the movie. One Way will be released both digitally, on Paramount, and in theaters, on September 2nd, via Saban Films. In the meantime, check out the trailer for the film below.