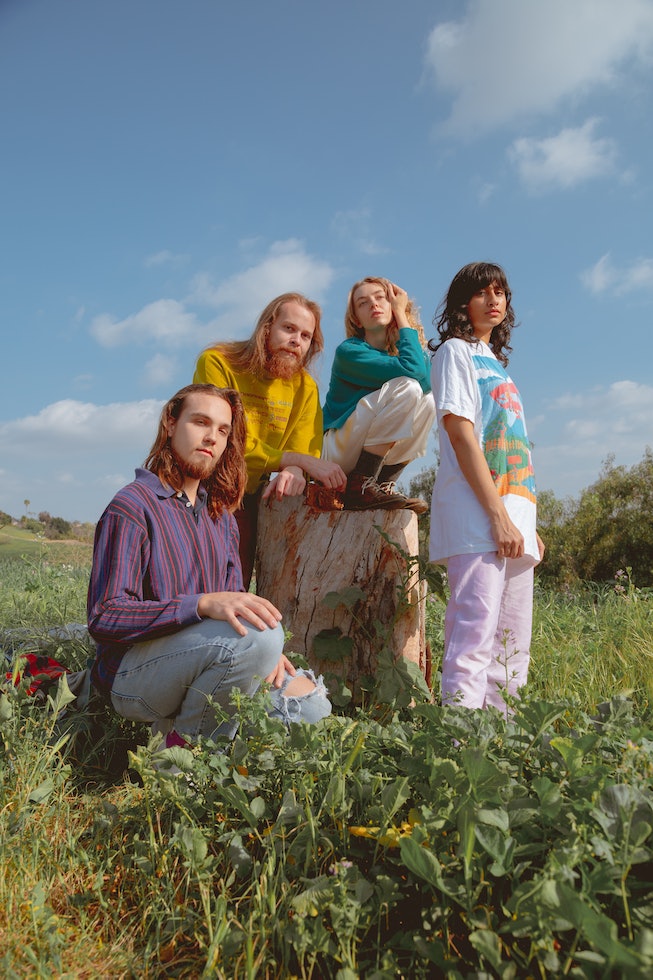 Mamalarky's indie rock summons an easy and pure joy. Like stepping out from under a tree canopy and into the sun, or feeling the first kick of wind on a hot, sticky day. It's that sort of gentle wonder that the Los Angeles-based quartet — comprised of ex-Cherry Glazer bassist Livvy Bennett, drummer Dylan Hill, keyboardist Michael Hunter, and bassist Noor Khan — channels on their latest song and video, "How To Say" which NYLON premieres exclusively on Wednesday. Clocking in at a brief one minute and 50 seconds, the song's bright guitar licks and Bennet's fuzzy vocals go down like the sweetest little package. As Bennet's inquisitive lyrics wonder: "You say you love me, but what does that mean?"

It's the kind of question scribbled into diaries, or circled around in daydreams. In the case of Mamalarky's self-directed music video, shot using Bennet's parents' old DV film camera, it's shouted out of open windows, and gleefully danced to in attics and parking lots. There's a joy in wondering at all.

Over email, Bennett mused on further, writing: "This concept of shared love — 'You say you love me but what does that mean?' — it's like... does love mean the same thing to both of us? Can it ever entirely mean the same thing, being different people who experience life so differently? Maybe that's why they invented the five love languages, to reconcile with these little differences in how we give and take and feel love? Maybe this expression that you're listening to now is as close to an understanding of love as anything else."

Mamalarky's debut album is out this summer via Fire Talk. Watch "How To Say" below and read on to learn a bit more about the band.

Bennett: It's 95 degrees in Texas currently. Sweating is a good purge. The heat can be so intense here that there's a mirage or what's called a 'heat haze' off the sidewalk.There's a lot of bird song going on, now that it's spring.

How did "How To Say" come together?

It was actually supposed to be a demo, and then I realized it wasn't going to sound more genuine if we went into a studio to record it, so we decided to run with the home-recorded version. Pretty immediately after that, we started filming the music video on my family's old DV film camera. It's got a nice flow and I feel really grateful I'll have a little snapshot of this weird moment of history.

Mamalarky's debut album is coming out this summer — how does it feel to be sharing it?

It's definitely nerve wracking. On top of it being our first full-length, we have no idea what the future holds in any way. But we're really eager to put it out there. These songs are songs I really like, and I think they can bring positivity, excitement, and comfort to people listening to them! At the same time, it feels superficial or odd thinking about putting out an album, promoting ourselves in light of what's going on globally. We want to take a second to redirect anyone reading this to an awesome charity providing relief to undocumented families who won't be receiving government assistance.

How have you all been filling your days during lockdown?

I've been listening to a lot of new releases. Video Age, Deerhoof, Faye Webster, and Jerry Paper have put out some cool stuff lately. Also learning some new chord extensions and scales on guitar. I asked my bandmates too; Noor said she's walking her dog, playing Animal Crossing, and learning disco bass lines. Dylan's been spending time in his yard and cooking up good food, as usual. Michael's been writing music and playing music and recording music. We've all been missing each other </3.

What's something (a book, album, movie, or whatever) that's brought you joy during this time?

I'm enjoying that if you type 'please sir' on an iPhone it auto suggests you to use the little sweet baby emoji that's on the verge of tears. That's the main thing getting me through all of this. Michael's been listening to "Light As A Feather." Noor's been cookin' biscuits from scratch. Dylan's been watching Pendleton Ward's The Midnight Gospel. Collectively we're looking forward to the day we can make up annoying songs on long drives together again.