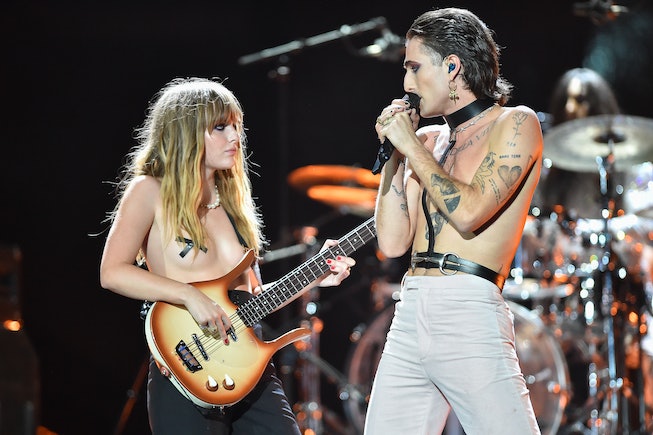 Last night, Oct. 26, America was formally introduced to the Italian rock band, Maneskin. Fresh off their Eurovision Song Contest win, the impressive quartet made their U.S. television debut on The Tonight Show Starring Jimmy Fallon. Performing live from New York’s Studio 6B, the group dazzled viewers with their hit-cover of the viral song “Beggin’.”

Maneskin originated in Rome. The group features Damiano David as the lead vocalist, Victoria De Angelis on the bass, guitarist Thomas Raggi, and drummer Ethan Torchio. Before gaining popularity, they performed in the streets of Italy, singing covers and original songs for anyone passing by. In 2016 the band joined Season 11 of X Factor (Italy), and placed second in the competition. Since then they’ve released three studio albums and over 10 hit singles, but their popularity only recently made it overseas.

Thanks to TikTok, music-lovers everywhere were introduced to their stellar sound. Maneskin’s cover of “Beggin’” — which was originally written by Frankie Valli and The Four Seasons in 1967 — recently turned into a popular dance trend. Despite being nearly 54 years old, the anguished love song has withstood the test of time. “Beggin’” was wildly popular when it was first released, then picked up traction again in 2010 after being featured in Step Up 3, and now it’s experiencing a modern rebirth for the next generation.

Maneskin’s cover has racked up an astonishing 701 million streams on Spotify, while also accompanying over 10.6 million videos on TikTok. Last night’s performance of the single did not disappoint. After performing the cover, the rock group sang their new single “Mammamia” for the audience.

The group’s next performance is expected to be at the MTV Europe Music Awards in Budapest. According to The Hollywood Reporter, the ceremony is, “a global celebration of music for all audiences around the world.” Maneskin is reportedly one of the first musical acts to have been scheduled, along with Colombian singer-songwriter Maluma, and pop artist Kim Petras, who is making her EMA debut. This year the rock band is nominated for “Best Rock” and “Best Group.”

The show takes place on Nov. 14 and will broadcast live in 180 countries at 9 p.m. Central European Time. Until then, watch Maneskin’s full Tonight Show performances of “Beggin’” and “Mammamia” below: