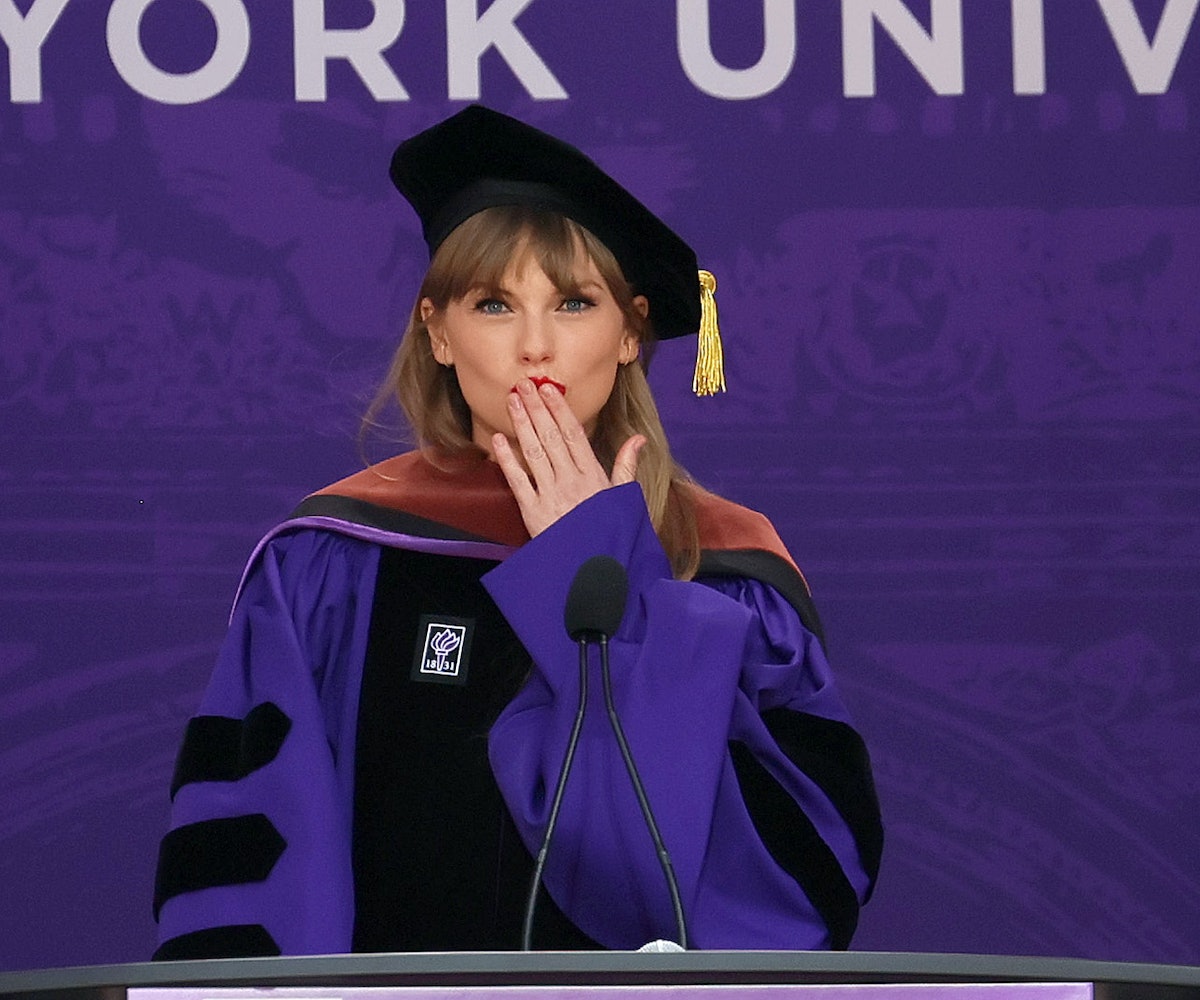 Throughout the 2021-2022 academic year, it felt like New York University was trying to make Swifties collapse. In September, Swift’s frequent collaborator Jack Antonoff was announced as the artist-in-residence at the Clive Davis Institute, and then in February of this year, a course dedicated to Swift’s career was introduced at the university, taught by Brittany Spanos of Rolling Stone. When Swift was revealed as a speaker at the Yankee Stadium 2022 commencement then, it felt like the finale to what has affectionately been named by my Swiftie friends as “evidence that manifestation is real.”

Even before there were classes specifically dedicated to her, Swift’s impact at NYU was apparent. As a recorded music major and politics minor, I constantly saw Swift’s movement through popular culture extended into the classroom, whether it was through inspiration during a songwriting session, or examining Swift’s role in voter turnout for my research methods class. In music business classes, we would often discuss Swift’s ever-evolving fight for artists’ rights and dissect her musical and marketing legacies as inspiration for our own projects. Up until she directly interacted with the university this year, I always attributed that impact to her just being a mainstay in the cultural zeitgeist. Knowing fans from around the world would be watching a livestream of our commencement then, I thought Taylor’s presence would create a panopticon effect for us graduates.

My friends and I discussed days before the event how Swift’s presence would affect the ceremony: will there be fans outside? How early should we get there if so? Should I bring a copy of my resume to give to Tree Paine (Taylor’s publicist)? However, at the actual ceremony Taylor’s presence only complimented the event — it never overshadowed it. Swift truly felt a part of the class, paying attention to and cheering on every speaker, performer, and graduate, from Rodney Anderson’s (Tisch ‘22) moving speech about leaning on your community and making yourself be the change you want to see in the world, to Naima Alakham (Tisch ‘22) stunning rendition of “The Star Spangled Banner.” It truly felt like she was there to celebrate the students — and her own honorary doctorate degree. Before the ceremony, she even sent students at the Clive Davis Institute special Taylor Swift branded 2022 graduation tote bags and T-shirts. Having Swift speak at our graduation felt like a full-circle moment, as some of the first friendships I made at NYU were spurred by dining hall conversations about her music (you would think she was paying them to play 1989 on shuffle at the Weinstein dining hall with how often we’d hear it). Even the first conversation my current two roommates and I had when we met was a heated debate over which Taylor Swift album is the best (and yes, the answer is still Reputation).

It truly felt like she was there to celebrate the students — and her own honorary doctorate degree.

Receiving an honorary doctorate of fine arts, Swift approached the podium after being escorted and introduced by Jason King, chair of the Clive Davis Institute. Swift spoke on behalf of the other honorary degree recipients: chancellor Félix V. Matos Rodríguez of the City University of New York and Susan Hockfield, the first woman president of the Massachusetts Institute of Technology. Her speech translated her own meditations on her career into post-grad “life hacks.” Swift’s speech jumped from anecdotes about early rejections at record labels to self-aware quips about low points in her life (“Nearly losing my career gave me an excellent knowledge of all the types of wine,” she remarked). And at least for the thirty minutes she was speaking, I forgot about the sunburn I was getting (there’s only so much sun a Taylor Swift-decorated tote bag can block for five hours).

While she may not have gotten a traditional university diploma growing up, Swift explained that her education came through life experience. One reason I chose to go to NYU is for the non-traditional college experience it offered. There’s not really a central campus and getting a degree in recorded music is a singular experience of its own. Taylor’s speech really emphasized and validated the importance of forging your own path. When label executives in Nashville told her “there was no place for a 13-year-old on their roster,” she would post her songs on MySpace and create a community of teenagers who, like her, “love country music but didn't have anyone singing from their perspective.” Constants in her career, like the media’s coverage of her dating life, taught her to “protect [her] private life fiercely.” As I venture off into the world, it is comforting to remember that sometimes these “nos,” or things that can be perceived as negatives, can eventually lead to some of the best things in one’s life. Though, in my case, it’ll be tough for anything to top today.