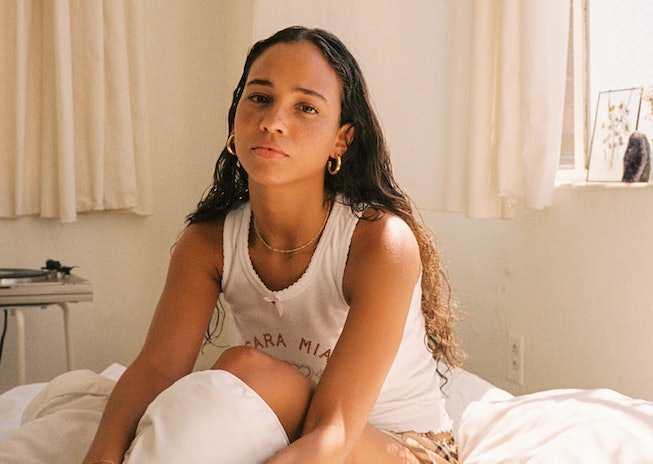 24-year-old María Isabel has a way with words. "All of my songwriting usually starts as a poem," she tells NYLON over a Zoom call from her studio in Los Angeles.

Isabel's first single, "The 1," viscerally captures the way memories tend to play on a loop when you're missing the person you made them with. "Drivin' down the 1/Sittin' shotgun to my love/When I'm alone again/Back on my own again/I roll the memories in my head."

"The 1" appears on Isabel's forthcoming debut R&B EP, Stuck In The Sky, which the New York City native wrote about the painful experience of being in a long-distance relationship. At the time, she and her boyfriend were living on opposite coasts, an agonizing situation captured in her new single, "Distance," the video for which premieres exclusively on NYLON, below.

"I think the song really was just coming out of the frustration of, nothing can really replace being in person," she says, adding that while video calling makes distance more bearable, nothing beats actual face time. "Distance makes the heart grow fonder, I feel like is the favorite line of like, 'Oh, you'll see that person again, and missing them as a good thing. You have a person to miss.' And it's just like, those things definitely help for a minute or two, but at the end of the day, it's like we've gone months without seeing each other and we don't know when the next time will be."

The fact that Isabel captured the way so many millions are feeling now as travel and in-person interaction has become scarce, was unintentional but welcomed. "[It ended up being] a weird time to put it out, because I feel like now it highly resonates with the rest of the world." As she prepares to release her debut EP, Isabel takes solace in the fact that she can still connect with her fans online.

"Distance" captures a distinctive feeling — a pang of yearning that seems to only grow stronger with time — but newly settled in California, the singer has resolved her long-distance issue. Now, it's all about the music. Counting Amy Winehouse, Lauryn Hill and Alicia Keys as her influences, Isabel's distinctive voice stands out in a sea of similarity. Cutting through the buzz with her highly personal, introspective lyrics and sparklingly clear vocals, the singer is poised to be your next favorite artist.

"For me, songwriting is number one," she says, explaining that while she's always loved to sing, she began songwriting in earnest her junior year at NYU. As she prepares to begin work on her next EP, which is already brewing in her mind, Isabel says she's ready to keep elevating her sound, creating something classic that still fits into the modern R&B landscape. That's where the storytelling comes in. "I have something to say, and that's what I want to be the forefront of the music, especially because I feel like that's what sticks with me as a listener, is what the person has to say. I do want my music to last."

Watch the video for "Distance," below: