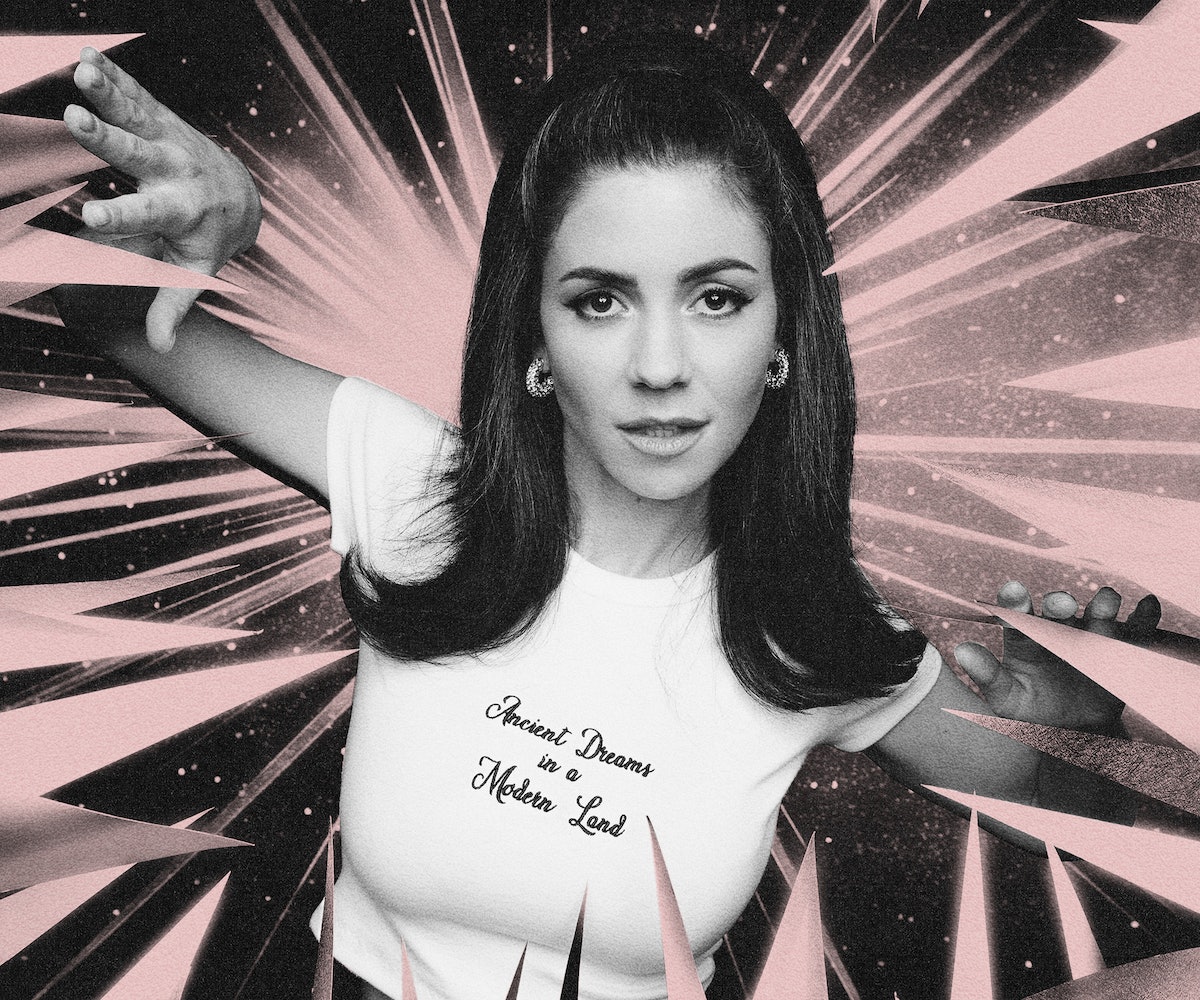 Marina Diamandis’s fifth album opens with an existential revelation. Baring her third eye, the 35-year-old pop singer poses the question, “What's your purpose? Why were you put on Earth,” on “Ancient Dreams In A Modern Land,” the record’s eponymous title track. Her response: “I am the observer, I'm a witness of life /I live in the space between the stars and the sky.”

You could interpret it as a vague, woo-woo, spiritual thing, but there’s also a strange degree of accuracy in the statement. After all, the Welsh and Los Angeles-based star, who now simply goes by Marina, has spent her entire career making anthemic pop songs that aimed to hold an observing mirror up to the world.

Her early singles like “Primadonna,” “How To Be A Heartbreaker,” and even “Power & Control,” found a voracious fandom on 2012 Tumblr as they reflected the turbulent, angsty, and singular experience of being a teenage girl on the platform at that time. Several years later, in 2019 — following a short hiatus in which Marina nearly quit music and went back to school to take classes in psychology — she did it all again for her last record Love + Fear, though with much bigger ambitions. With songs like “To Be Human” and “End Of The Earth,” she turned her gaze to the great issues plaguing the planet today: riots, nuclear disaster, war, and climate change, while lamenting, “Still I don't know what life means.”

Marina attempts to answer that question on her new album, Ancient Dreams In A Modern Land, out Friday. The 10-track project continues along the same ethos path as Love + Fear; “Man’s World” is a roiling pop song in defiance of the patriarchy, and “New America,” perhaps the most potentially controversial on the album with jabs at white suburbia and mass agriculture, is a rattling, thunderous omen directed at privileged America: “You can’t bury the truth, it’s time to pay your dues.” But it’s the more philosophical songs on the album, like the title track mentioned above, or “Highly Emotional People,” a surprisingly tender ballad encouraging vulnerability, that quietly reveal the journey the singer’s been on through the last few years. “I am here to take a look inside myself/ recognize that I could be the eye, the eye of the storm,” she sings.

Zooming from her Los Angeles home in between prep for her forthcoming virtual concert, Marina chatted with NYLON about the new album, what it was like writing “Purge The Poison” during the George Floyd protests, the importance of vulnerability, and why she still has hope for America’s future.

How's your last year been in lockdown? Did anything come from your time indoors that surprised you?

Yeah. God. It's just been a year that is really hard to articulate in a sentence. Thinking back to it, I feel like my memories have been stored in a different way. It feels much blurrier to me than normal life. But I do benefit a lot from having a slower pace in life. I'm more introverted than I am extroverted, in a way I've learned that I don't actually need to fill my time as much as I thought I did.

Were you working on this album during lockdown?

Yeah. I started it in summer 2019, so I wrote “Man's World” back then. And then I think the next batch of songs I wrote were “Purge the Poison.” “Purge the Poison”, what else was there around that time? “Venus Fly Trap.” Every few months I would rent an Airbnb in London, go there for a week and I would just do a huge batch of songs. It was mainly written in these circumstances.

Were those written during the summer when the George Floyd protests were happening?

How did that experience affect you?

I think it was the day after I started writing [“Purge The Poison”]. I think like most people who have a conscience and a heart, most of us were deeply affected, and my perspective is only as a white person. But that also brings its own weight to it because I think there's still a lot of work to do for myself and for a lot of other people in relation to this issue of latent racism that is still everywhere in society. Actually, when I started writing this song, I did a day on it and then I stopped and didn't start it again for another six months, because I just felt like, I don't know... I think I needed to do my own thinking on it.

I wanted to make sure that the lyrics felt right and I didn't feel like I was preaching or anything, because I'm not coming from that place. I wanted to try and paint a picture of what's happening and what's also positive about what's happening in America. Suddenly, we're at least able to see the reality of how things are for a lot of people who aren't white. I don't think collectively we'd been at that point before. I think a lot of people were blind to what was going on.

Throughout your career, you’ve never shied away from talking about difficult topics. Is that an important part of the music that you understand yourself to be making?

I don't know whether it's important because when I write it, I just write what I'm interested in. And not everyone is meant to write political pop, just as not everyone is meant to write club music or candy pop music. We've all got our place in the world and I feel like I've naturally gravitated towards social commentary as a way of trying to understand it for myself. I don't know if it's important. Sometimes when I do interviews, people have asked about “New America” and they're like, "Are you nervous about that song?" And I'm like, "Oh, I don't know. Now I am. Now that you've said, should I be nervous, maybe I should. I don't know." But the things that I've put in that song are about basic human rights. And if I get a backlash from it, then that's just something that I have to accept that comes with writing about certain subjects.

The title track gets a little philosophical — you’re wondering what our purpose is in this world. Is that something that you think about a lot, your purpose?

I am particularly existential. But yeah, I think that's always kind of been in my songs a little bit, whether that's in a lighthearted way or a deep way. And actually it's linked to depression a lot as well, which maybe that's also other people's experience with existential thinking. I think that's just part of my identity as a songwriter. Those are the topics I explore.

That whole song is inspired by a Hindu scripture. It's called the Bhagavad Gita and I think over the years I've become more and more interested in this type of conversation, but I don't know if when people listen to it, they will understand that it's about that.

“If I get a backlash from it then that's just something that I have to accept that comes with writing about certain subjects.”

“Highly Emotional People” feels similar in that it’s very tenderly encouraging people to be more vulnerable. Do you see vulnerability as something that the world is missing, or needs more of these days?

Always, I suppose. Particularly with men, because they've been brought up to (or socialized to) believe that expressing emotion is female or feminine, even though I think we all possess feminine and masculine traits. When I was writing that I was specifically thinking about men, but it's also for all human beings. I think when we have negative or difficult emotions, we think that's wrong: “We should be happy all the time therefore I'm going to use psychological tactics to not address those feelings.” I don't know why humans do this, but we do. And that song is definitely about accentuating the fact that we are emotional beings by design and that we're meant to feel all emotions, the full spectrum, in order to grow.

What sparked you to write it?

There wasn't any major event, I think I struggle with how high and low my own moods go and that's always been a part of me. But I was also thinking about it in terms of a relationship that I had at the time, and how difficult it is sometimes for men to be able to connect with other people in that way. I think it's something that we should be encouraging them to feel safe to change. It just doesn't seem fair that men are kind of punished for being emotional in a way.

The album as a whole grapples with everything ailing America: toxic masculinity, capitalism, mass agriculture, which you bring up in “New America.” How do you feel about America's future?

I feel optimistic. I've always loved and gravitated towards America. I don't know if that's just because it has been this world superpower country for so long that sometimes when I refer to problems that are attached to America, it's not necessarily that it is about America; it's global, but America symbolizes this kind of frontier of what's new, what's acceptable, what is the ideal or what has been done for a long time. And it's an empire just like however many thousands of years ago Greece was an empire, and all empires have to end at some point. I'm going off track a bit, but the main [point is]: I've always been attracted to American culture. I live here now; I pay taxes here. I'm a resident and I feel really optimistic about the future because I think the bonus of what happens when reality is revealed to people in a mass consciousness way is that we then have the opportunity to change. I think we're at a point where we have never been before.