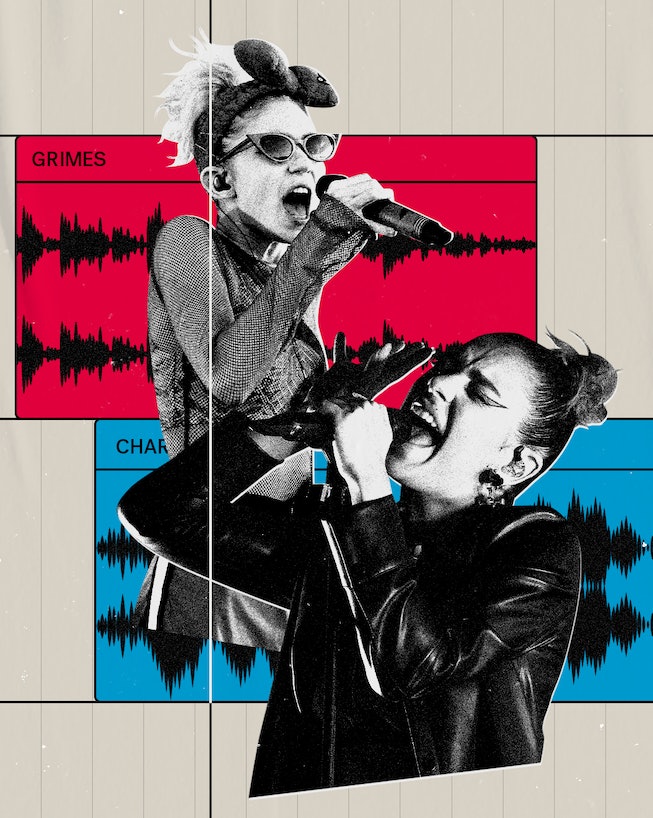 To say that the mashup went out of style would be doing a disservice to the pre-TikTok power players who helped instill a love for the mixing method in millennials and Gen Zers around the globe throughout the 2010s. From the campy takes on the classics in Ryan Murphy’s Glee — a show that even paid homage by centering an entire Season 1 episode around the concept — to the viral longform videos of Daniel Kim’s “Pop Danthology” and DJ Earworm’s “United State of Pop,” the current generation’s teens and young adults have always been exposed to the genre. Only recently, however, has the mashup gotten a whole lot more popular — and much more succinct.

Normally confined to a mere 15 seconds, audio mashups on TikTok are beginning to shift the ways in which young people discover music (mashups of hits from the ‘90s are just as popular as those featuring current chart-toppers like Cardi B and Megan Thee Stallion’s “WAP”), and how a new cache of artists and creators perceive sampling. While techniques and sourcing still vary — with many audios co-opted from platforms like SoundCloud and YouTube, then reposted by de facto TikTok curators and micro DJs — the core of the genre is still present. The mini tracks may not be as loaded as a Girl Talk set, but they’re just as deliberate, squeezing into the compact walls of a TikTok’s track length.

Perhaps the most recent and hyper-online exemplar of not only the style but also its lifespan on the platform is musical duo Magdalena Bay’s “Oblivion Forever,” a mashup of electro-pop harbingers Grimes and Charli XCX. The audio, which combines the gentle lyricism of Charli XCX’s first quarantine single “Forever” with the bouncy and recognizable synths of Grimes’ breakout hit “Oblivion,” saw a significant rise in popularity back in early July on TikTok after getting posted by the hit-discovering creator Ha V (@GluecoseBaby).

While the name might not be as instantly recognizable as Addison Rae or Charli D’Amelio, those in the know — including label marketers — are well aware of Ha V’s ability to break a song and kickstart a career. Having first posted the audios of several soon-to-be-viral hits from artists, like BigKlit’s “Liar,” Tia Corine’s “Lotto,” and most notably Ashnikko’s “STUPID,” Ha V is tapped into the best rookies of several genres all at once. With just over 36,000 followers, he’s become a tastemaker on the platform for the key creators curating the next viral dance or trend. His usage of audio mashups, however insignificant to his more general knowledge of what works on Gen Z’s preferred lip-syncing app it might seem, shouldn’t be overlooked.

“What I’ve noticed a lot are audio accounts,” Ha V says of the resurgence in the popularity of mashups online. “People are not posting content, they’re posting videos just to get audios out there. It’s crazy to think about how people are finding not just one, but two artists through these mashups. Even old songs, too.”

Just how “old” the songs blowing up by way of the mashup trend is up for debate, however, considering that “Oblivion” is technically Grimes’ oldest hit in her discography. Most mashups tend to combine hyper-Gen Z artists and chart toppers to maximize fan engagement, like the viral mashup by Carneyval that used Post Malone and Childish Gambino tracks to spark support for Black Lives Matter protesters back in June.

While Ha V doesn’t make the tracks himself, he always is sure to credit the artist in the audio byline on TikTok, usually redirecting a listener to a DJ or artist’s SoundCloud account. “Oblivion Forever” in particular has racked up an impressive 200,000-plus plays on SoundCloud and is currently Magdalena Bay’s most streamed song on the platform. It also did numbers for their official TikTok, albeit fewer than Ha V’s audio post.

“I had the ‘Oblivion’ audio blow up on TikTok, and when I saw the ‘Oblivion Forever’ one, I thought, ‘This is probably going to do pretty good,’” Ha V continues. “Either one person knows one half of the song or the other and it can introduce them to the other part of the song, and it just goes from there.”

There’s a prevailing thread, however, throughout the mashups that do the best on @Gluecosebaby. “I think that a lot of the stuff I post, you can kind of tell, is more of the ‘alt’ side of TikTok. One of the first ones I put on there was the ‘Unlock It’ and ‘Better Off Alone,’” Ha V says, referencing DJ Victor Borge’s “Better Off Unlocked” mashup of Charli XCX’s Pop 2 cut and the classic Alice Deejay club track. The audio saw a massive surge in popularity after getting posted by Ha V, spurring the reposting of the track ad nauseum on SoundCloud by copycat accounts and even recognition from Charli XCX herself in her quarantine DJ sets. It’s also undeniable that Ha V’s loose interpretation of “alt” TikTok encompasses the internet’s most controversial new genre, hyperpop, as it includes such a rich cache of Charli XCX and PC Music-adjacent tracks.

Not every mashup audio comes from a curator rifling through hours of SoundCloud tracks, though — many young DJs and producers are taking to the platform to jumpstart their careers and even live-mix songs. Creators like Ian Asher adopt a sort of micro-DJ identity on TikTok, condensing an artform from hours-long sets to just several seconds.

“To be able to condense it and tell enough within, not only the audio, but the visuals and the movements — to tell a story with it, is something big for me,” Asher says of his full-frontal approach to remixing, being one of the only creators to show themselves actually mixing on CDJs for an audience. The approach, while quite unconventional for the platform, has unequivocally worked for him. “I only started posting consistently two weeks ago. I had 23 followers two weeks ago,” Asher tells me in late July. At the time of the interview, he was elated at the prospect of reaching 150,000 followers — he’s now surpassed 400,000 followers.

Not every remix Asher posts is a widely circulated mashup, but the ones he does post are fiery nonetheless; take his mashup of Saweetie’s “Tap In” and Puri x JHORRMOUNTAIN x Adje’s “Coño,” for example. In theory, the audio should have trended, since both tracks individually have enjoyed massive success on the platform and inspired dance trends from the tippity-top range of creators and Hype House inhabitants. Instead of attempting to make audios trend, however, Asher simply entertains, gaining likes on his individual videos and treating his audience to the experience of a live DJ set.

“It’s sort of grown into this community, where I get tens of thousands of comments from people: ‘Do something with this song, do this!’” Asher states about his process for choosing songs, perhaps marking himself as the only DJ in the world who doesn’t mind taking requests. “So more recently I’ve been exclusively replying to comments, exclusively trying to encourage that fostering of a community.”

This community he speaks of becomes an audience for Asher in the same way Coachella ticket holders have been for years for the top IRL DJs, with the only difference being that TikTok is democratizing the experience across variables of age and popularity. Unsigned artists are becoming key players, and bedroom DJs playing virtual parties will surely have careers in clubs post-quarantine.

Some are concerned with this democratization becoming something more non-linear, however, with the roots of remixing and mashups planted firmly by Black artists and DJs over the years in circles that were ostracized or devalued by white listeners. Non-Black Gen Zers got a lesson in the basics of the chopped-and-screwed technique when a viral video that did not acknowledge Houston icon DJ Screw’s creation of the genre began circulating. While not directly impacted by the rise of chopped-and-screwed songs on the app, mashups are enjoying some of the same success by being remixes at their core and taking inspiration from POC artists.

The answer to not letting the democratization of music listening and remixing become appropriation isn’t clear, and will perhaps take continued education over time, as well as more straightforward processes on TikTok for artists in general to reclaim their music on the platform. Instead of having one’s audio “copyrighted” (taken down from a curator’s page) in a mashup when a song inevitably blows up and is monitored for infringement by label heads, TikTok could reattribute the streams and views to the official audio upload. It’s a tricky problem, but one that needs solving if DJs and mashups are going to survive on the app in an organic way.