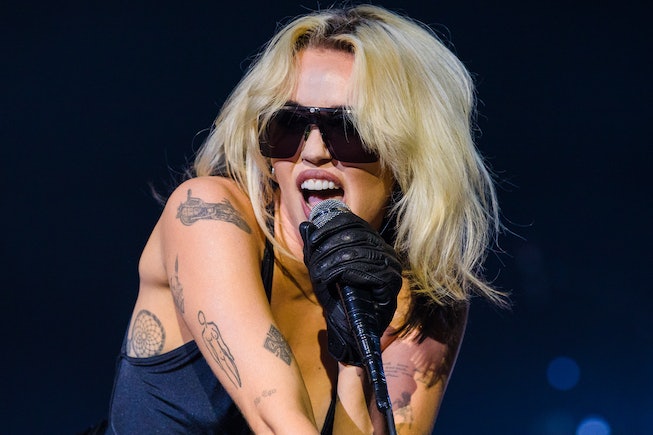 Miley Cyrus has a new project in the works. After years delivering iconic live performances — like “Heart Of Glass,” “Why Do You Only Call Me When You're High,” and “Jolene” — the singer-songwriter is releasing her first live album, Attention: Miley Live.

Cyrus announced the upcoming album on Twitter. “My fans have been asking me for a live album for a long time & I am so excited to give it to them,” she wrote. “This album was curated BY the fans FOR the fans!” Attention: Miley Live features a mix of 20 songs that, according to the singer, were influenced by her fans.

“I asked my audience what songs they’d like to see me perform at upcoming shows and this is the setlist YOU created!” she continued. “From fan favorite covers to some of my oldest songs, newest songs, & original unreleased songs “YOU” & “ATTENTION.” Cyrus then explained that she’s wanted to make her live performances more accessible for those who can’t see them in person. “I was doing a minimal amount of live shows this year & wanted the MAXIMUM amount of fans to experience ME LIVE!,” she continued. “This album wouldn’t be possible without my band & crew! Thank you to everyone who came to see my show & anyone who couldn’t make it, THIS ALBUM IS FOR YOU! I LOVE YOU!”

Attention: Miley Live will be released in April. The album will include songs recorded from Cyrus’ live performances including songs from her 2022 performance at the Bud Light Super Bowl Music Fest in the Crypto.com Arena in Los Angeles, CA in February 2022.

Ahead of its drop, Cyrus shared a high-energy album trailer, the record's track list, and the “Wrecking Ball x Nothing Compares 2 U” mash-up from the album. Read on for everything we know about the album including the exact release date, track list, and pre-album singles.

Ahead of Attention: Miley Live’s release, Cyrus has shared one of the record’s three mash-up tracks, “Wrecking Ball x Nothing Compares 2 U.” The rousing song combines her own Bangerz single with Sinéad O’Connor’s Prince-written classic “Nothing Compares 2 U” to powerful effect; when she slips into O’Connor’s verse halfway through “Wrecking Ball,” it’s done effortlessly, adding a show-stopping and nostalgic note to her performance.

Cyrus first debuted this Frankenstein version of the two songs at Lollapalooza 2021. Hear the song elow.

Attention: Miley Live is out April 1, 2022 via Columbia Records.