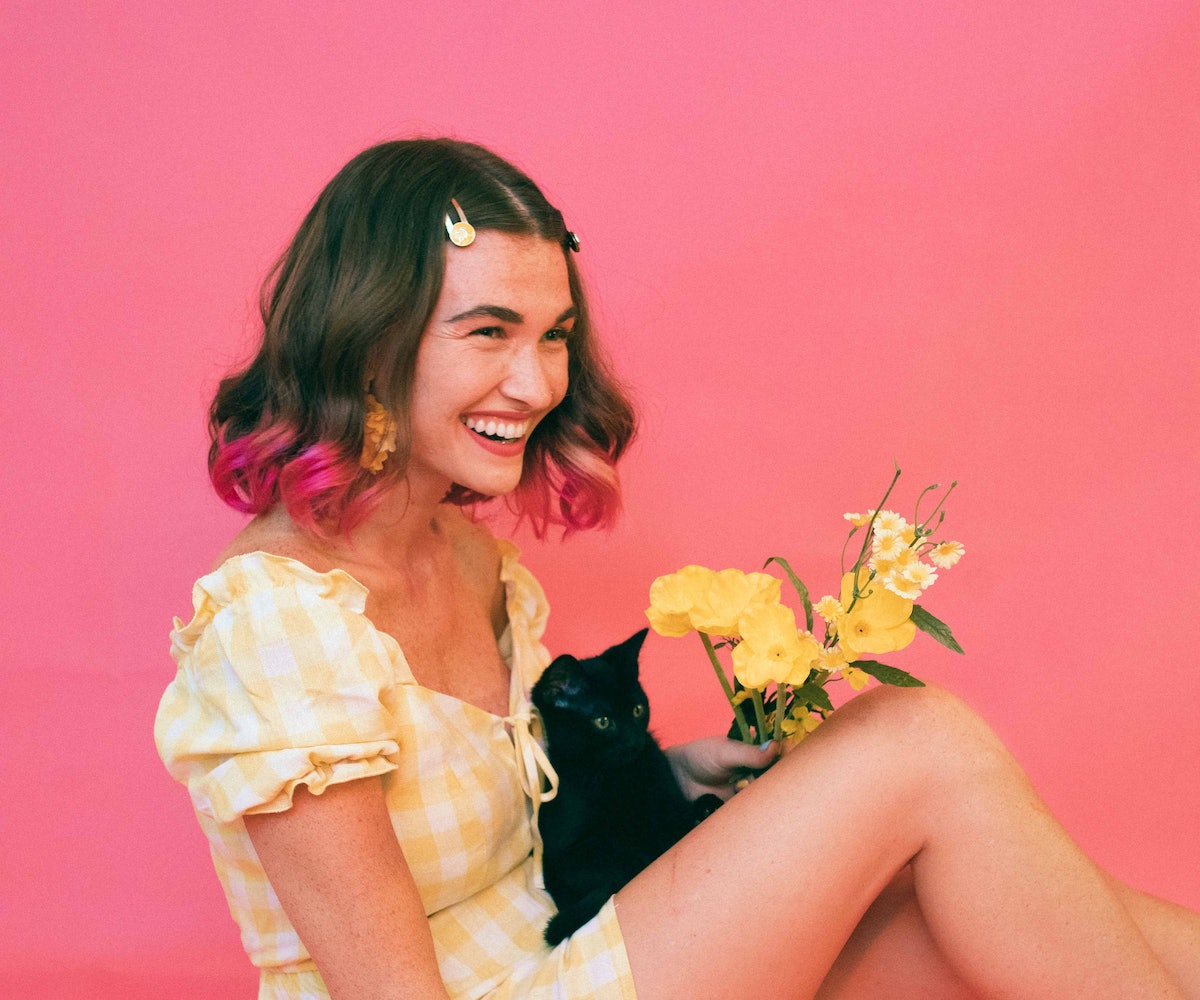 On May 18th, just a few days before they would announce their new album, SUPERBLOOM, Mandy Lee and Etienne Bowler of the New York band MisterWives revealed that after nine years together they had decided to romantically separate.

“It has been beyond devastating coming to this heartbreaking decision but necessary for us both and our happiness,” they wrote in a joint statement posted to the band’s Instagram page. “Writing this album has been a whirlwind of tears, anger, fear, pain and loss. But it has also given birth to new hopes, joy, and the celebration of growing through it all.”

For many, an announcement like this would precede the inevitable news of a beloved group disbanding, but when I reach Lee over the phone a few weeks later, she is quick to reassure that MisterWives has no intentions of breaking up. In fact, SUPERBLOOM — their forthcoming 19-track epic that was written in the weeds of Lee and Bowlers separation — frizzes with a current of renewed, revitalized energy. Expanding off their 2019 EP mini bloom, the group’s third studio album traverses upbeat, vibrant pop and simmering ballads to paint a portrait of a band that's bloomed anew through the cracks of a fissure. Ostensibly a break-up album, SUPERBLOOM more so reveals the growth of its makers, from Lee's own journey through the break-up that's etched into the song's lyrics, to the record's linear notes, which reveal an expanded cast of co-writers and collaborators.

“decide to be happy,” the new single MisterWives premiered on Wednesday, comes from the second-half of the album, just as the tone of the record starts to look up again. Against flares of trumpet and a warm backing choir of voices, Lee chooses her happiness over everything else. “Flowers don’t grow without the rain, and goodness don’t grow without the pain,” she sings.

From her home in Los Angeles, Lee details the creative challenges that arose after her and Bowler’s separation, why she decided to experiment with new sounds for the album, and the catharsis that came from documenting her pain into music.

Since MisterWives put out their last record out in 2017, I guess the biggest news is that you and Etienne have separated. How did you guys get to the point where you committed to put out a new record?

I guess the funny thing is even if me and Etienne's romantic relationship ended, our friendship did not by any means. We're still a band. We still talk everyday. People look at us like we have 10 heads. But we do have a very special relationship. It was never really off the table of like, 'Okay, we shouldn't make a record.' "Is the band going to be together?" wasn't a thing. We knew all of that would be okay.

Me and Etienne have always made the record together, basically. I write the music and he produces it and it was the first time where that part of making music couldn't exist at that point. How are you going to write a song about being devastated by a relationship and then go and make a song with that person about it? That's too brutal. It'll be hard enough having to play those songs live two feet away from each other, let alone fleshing them out in the studio together. It pushed me to go outside my comfort zone. I've never done co-writes and I was like, "I have to go work with new people to shake things up and just to jumpstart my system." So in that sense, that was the thing that was like, "Okay, some things will have to change."

What was that like to change your creative process and experiment with new co-writers?

It was super scary at first to go outside of what we've been doing for however many years and how I knew how to make an album. To go and work with new people where first of all, you go into a room and it's like, "Hi, I'm Mandy, nice to meet you. Here's my whole life story." Basically a therapy session with someone you just met, and then you're like, "Okay, let's take all of that and make a song." That was really insane for me to just break down those walls and be that comfortable and vulnerable with people I didn't know.

But they definitely pushed me to say things that I wouldn't normally say. I'd write lines or someone would challenge me and be like, "No, no, no, you got to say that." Or not being afraid of a song that sounded different because I was feeling things I've never felt before. So the album definitely goes absolutely everywhere. But if you listen to it from beginning to end, you feel the transitions and the progressions of the sound. It really takes you through every part of that. There's some dance-y, sassy records. There's some ballads, there's angry angst, just pure distortion that’s going on. And then you have really uplifting, victorious, beautiful [songs] like “SUPERBLOOM” or “decide to be happy,” where it feels like a choir of angels, and like you've made it kind of thing. It sounds kind of insane to say all those things live under the same umbrella, but if you listen to the song from beginning to end, I hope it makes sense.

Are you worried about performing the songs live?

I was, but we put out the EP, mini bloom, before our last tour a million years ago, and that had some really vulnerable songs on it, like “stories,” “the end,” and “find my way home.” I was worried about singing [them] and they became my favorite songs to play in the set.

I think something super cathartic happens on stage. When you're on stage and you're singing with people as one, it just takes on a higher meaning and you see how those songs resonate with other people. It kind of flips the switch of something that's so personal where you'd be like, "I don't want someone to read my diary." But then, there's something about everybody's diary, we're all writing the same thing and to read it out loud together becomes less scary playing those songs live. So that's kind of helped with my fear of the really hard song. I'm not saying like, "Oh, it's great." I definitely cry all the time. And “whywhywhy,” I cry every single time. “stories,” I cry every time. But it doesn't scare me. It's just part of the process.

The next single you're putting out is “decide to be happy.” How does this track fit in the album for you?

Originally, it was going to be a different song, but in the current state of the world, I was like, 'I don't know.' I think everybody's mind is incredibly fatigued and just unraveled and needs some spark of positivity and hope. That song is super special to me, whether it was going through the breakup or not. I struggle with depression and anxiety and happiness is this weird thing that we think just comes naturally. Like, 'Oh, you should be happy because of your circumstance, or your success, or if you have nice things, [when] it doesn't matter about any of the materialistic objects.' It's a choice, and it's not easy to be happy. So I wrote that song kind of as a mantra to remind myself.

The first line is, "Music has saved me, but it drives me crazy" because it forces my eyes to take a look and see that I got to decide to be happy, which is being so honest in my music. It's not that easy to be happy and you got to take steps to take care of your mind, to be kind to your mind. It's okay to have the hard days and find ways that are going to make you feel better. I think that's something we all have to really latch onto right now, because it's difficult to find anything that's positive or a beacon of light. You have to actively seek it out.

What are some of your beacons of light these days?

It's the little things, you know? It's really the little things. I have so many days where I'm like, "I can't scrape myself off the floor," and you go for a walk. I know it sounds so silly because it's so basic, but a walk around my neighborhood is really just, I don't know, fresh air and flowers, and the warmth of the sunshine feels like a hug, and energizes your mind, you get some endorphins going. Something as basic as a walk literally resets me when I'm having a really tough day and my head feels incredibly foggy and I just can't get it together.

Things like exercise, and eat right, and all these things, and a hundred percent I back all of that, but those things sometimes feel so daunting. So starting with the tiniest thing that's going to make an immediate difference to your brain chemistry is where I always start. I'm a very list-oriented person. You get ambitious and it's like, "I'm going to do a million and one things to reset my life and change and be a better person." But I think starting with the most fundamental basic — even for this interview, I was like, "I'm going to get dressed and be a person today."

Do you have any specific messages you hope your audience takes away from this album?

Yeah, absolutely. I guess... It seems silly to even talk about a breakup album in the climate of the world when there's such crazy, big, real life problems that really made all of a sudden, your tiny personal issues that felt life shattering, it feels not small, and I'm not not validating everybody's struggles, but I guess no matter what people are going through, to know that you can make it to the other side. That the impossible is possible and to keep fighting through.

The reason the album is called SUPERBLOOM, is I went out to the poppies with my sisters during a really, really tough time. I was working on the album and I was just so unraveled and in such a dark place. I went out there and it's vast botanicals, a beautiful phenomenon. You look at these poppies, and the army of all of them, it's this big, vibrant, just orange, incredible visual. But you look at every single one and they're so delicate. Literally the tiniest touch and all the petals fall off. And I guess that is the message, like humans are very complex. We're a juxtaposition. We are delicate, yet we are strong. We're fragile and we're resilient. I wasn't really taught that both of those things exist in the same plane. Basically, through my whole journey, I've felt both of those things, endings and beginnings all at the same time. So to be okay with that and not beat yourself up. Just a reminder that people are these brilliant poppies and you can superbloom and make it to the other side, and to be okay with the process. To trust the growing of it all.

SUPERBLOOM is out July 24 via Fueled By Ramen