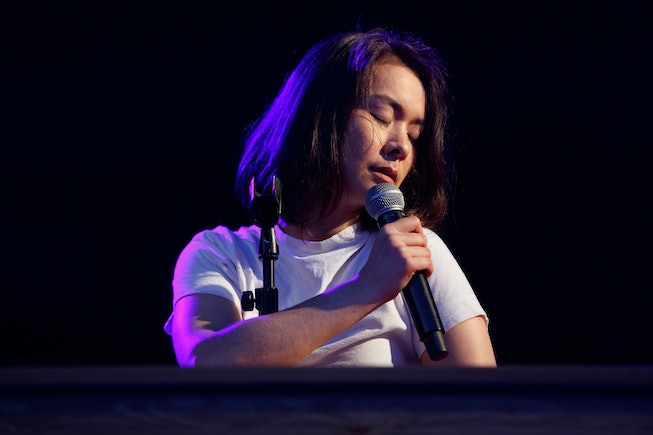 Back in October 2020, Mitski quietly announced that she would be scoring the soundtrack for an upcoming sci-fi graphic novel called This Is Where We Fall. Now, the singer-songwriter, who's been on an indefinite hiatus since 2019, has unveiled the first taste of her score with her new track "The Baddy Man." The song is Mitski's first release since 2018's critically heralded Be The Cowboy. During her last tour stop for Be The Cowboy at New York's Central Park, she announced that the show would be her last "indefinitely," and shortly afterwards deleted all of her social media.

Opening on rollicking, rolling guitar that sound very reminiscent of Johnny Cash's "Ring Of Fire" era, "The Baddy Man" is Mitski gone west — perhaps to actually be the cowboy, if you will. It fits the theme of the novel pretty accurately: Writer and co-creator Chris Miskiewicz described the forthcoming graphic novel as "a science-fiction Western that deals with death, theology, and the afterlife," per Rolling Stone.

"It was exciting to make a soundtrack for a comic book,” Mitski said of the opportunity in a press statement back in October. “It allowed me to work outside of my usual songwriting form and try to approach it like a score, but without any of the cues that come with working alongside a moving image, which ended up being both freeing and challenging. I hope the end result helps to immerse you in the story!”

Per Rolling Stone, This Is Where We Fall will be published on May 5 in a standard softcover and hardcover edition, which will come bundled with a cassette of the soundtrack. However, confusingly, Z2 Comics, the company publishing the novel, claims it will be shipped in March 2021 on their website. Either way, both editions, along with a deluxe version that will come with a vinyl pressing, are available for pre-order on Z2 Comics' website. The deluxe edition will each be limited to 2,000 copies.