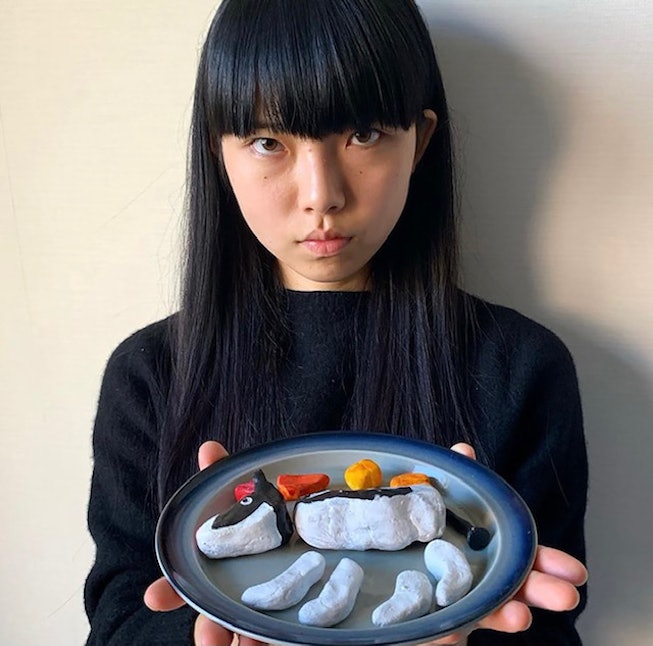 Nana Yamato’s life changed at 14, when she stumbled upon a live performance of Danish band Iceage on YouTube. At the time, the now 20-year-old Tokyo law student and bedroom pop artist was still in high school, listening mostly to her father’s old records of The Doors, David Bowie, and The Strokes. But after hearing the punk rock band’s music, “I thought for the first time: I’ve found my music,” she says.

Ever since, Yamato has been crafting her own tunes — brooding, dreamy, and transportive — in the sanctuary of her bedroom and under the mystical cover of night. She’s gearing up to release her debut album on Friday — fittingly titled Before Sunrise, it's a tender and quietly ruminative 12-track package filled with the turbulent dreams and lonely desires of a young person waiting for her life to change. On early-album track "Gaito," over bright keyboard that blinks and glows like street lamps over a dark road, Yamato softly pleads for "anybody, take me out of here," the lyrics in a mixture of English and Japanese.

Below, NYLON exclusively premieres "Gaito's" music video, a simple affair that finds the singer standing in a white-trimmed black dress against a white background, miming her way through the gentle song. Watch it now, and read on for a conversation with the Japanese artist about her childhood in Chiba City, why she dislikes going to school, and her favorite record store finds.

I work at BIG LOVE RECORDS, every day since I was in high school. My university is all online now, so I have more time. I use that time to make music and paint. A lot has changed since COVID. But luckily, I think everything is going in the right direction for me. I was able to finish the album, and I learned a lot from my mistakes and stumbles. COVID is a terrible thing that has changed the lives of many people, but I feel like COVID is a wall that has been put up against all of humanity at the same time. I think about how I'm going to climb it.

Tell me a little bit about where you grew up in Tokyo. What was your childhood like?

I'm not from Tokyo. A year and a half ago, during the summer break of my freshman year of university, I convinced my parents to let me live alone in Tokyo. I was in Chiba city. That's where [William Gibson's famous cyberpunk novel] Neuromancer is set, in Chiba City Blues. From there, I had to walk 45 minutes to get to the station from my parents' house, and then it would take 1.5 hours by train to get to Harajuku. Even so, I went to Harajuku every day when I was in high school. My hometown is small and in the country. There was nothing but a gas station and a mechanic shop. School was just a formality. In there, I always felt that I was different from other people and I was crazy. It was a time when we all went through a phase called "being a teenager," maybe it was the same for you. I kept thinking, "What is missing in my life" and wondered what the meaning of life was. I think it was the [Osamu] Tezuka manga Phoenix and the novels of Yukio Mishima I was reading at the time that made me do that.

When I was 14 years old, I found a video of Iceage's live performance on YouTube by accident. Until then, I had been listening to my father's old records. My favorites were The Doors, David Bowie, The Strokes, and The Libertines, but they were just old music that didn't feel right to me. But when I discovered Iceage, I thought for the first time, "I've found my music!” I thought I had finally found something I like badly. I've been hooked ever since.

My parents had always loved music when they were young, so they had a guitar and a boom box at home. They gave up their dreams when they became parents. I mastered at least the power chords when I was in junior high school. I think I started writing songs in a natural way. It wasn't really good work, though. My parents wanted me to become a bureaucrat, so they probably didn't like the way I got into music. But recently, my father told me that he envied me for doing what I love, and that made me feel a little strange.

I learned a lot of culture when I started going to BIG LOVE RECORDS. That's when I started to get more motivated. I started to understand what I was supposed to do. I was serious about it, but my parents were incredulous and against it.

You currently go to school and work a job. How do you balance making music in addition to all of that?

Honestly, sometimes I don't find the right balance either. I'm in the law department of Waseda University. My other classmates go to school thinking they want to be lawyers or prosecutors, but I've never thought of it that way. I'm embarrassed to say that I really don't like to study. There are people who go to university because they love to study, and I think those people are really great. I'm only going to university because my parents wanted me to become a bureaucrat. I've given them a lot of trouble in the past, so I'm at least trying to answer their wishes. Going university is just my role as their child.

As a musician I listen to music while walking to work. I'm always thinking about how I can arrange it or combine it with this or that.

I read you are an avid records collector. What’s your most precious or rare record you’ve found so far?

As I said before, I have no interest in rare old records. It's not the music of my time. I like David Bowie so much that I've read many of his interviews. The reason why I like him so much is because he kept introducing new artists until he passed away. I also like his friend Iggy Pop, who plays Iceage and Viagra Boys on his radio and wrote songs with Pins and Death Valley Girls. It's been six years since I started buying records, so some of the stuff in my collection is getting rare. For example... Yung Lean’s aliases Jonatan Leandoer127, Psychopath Ballads cassette, Black Country, New Road’s "Athens, France" 7-inch and “Sunglasses.” (First pressing 500 copies. Each cover being completely different image). A Mosquitoes album from [record label] ever/never! Well, it's all recent. I buy four to five LPs and 7-inches every week, so I can't remember the old ones anymore... These days, I'm sure I'll always have an eye for limited edition colored vinyl, but it doesn't matter if it's rare or not. The most important thing and the most enjoyable thing in my life is to go to the record store every week to see the new records on the wall. So, Corona is trouble in that sense.

Before Sunrise is very dreamy and transportive. What do you imagine people doing while listening to your album?

To be honest, I still don't know how to make music, and I don't even know if the music I make is good or bad. I like it in my own way, but I always wonder how my favorite artists and bands can make music like that. But I don't think I want to be like them, which is strange. I would be very happy if someone likes my record, and I don't smile very often, but I think I would smile if I met them. I think everyone should do what they want to do, because I'm such a small person, but I've made a record and I'm being interviewed now. Modifications are very important.

Besides making music, what are your favorite midnight and before sunrise activities?

I like thinking about the new album[s] that's coming out on Friday. I'm wondering if I can buy them all.

Before Sunrise is out on February 5 via Dull Tools.