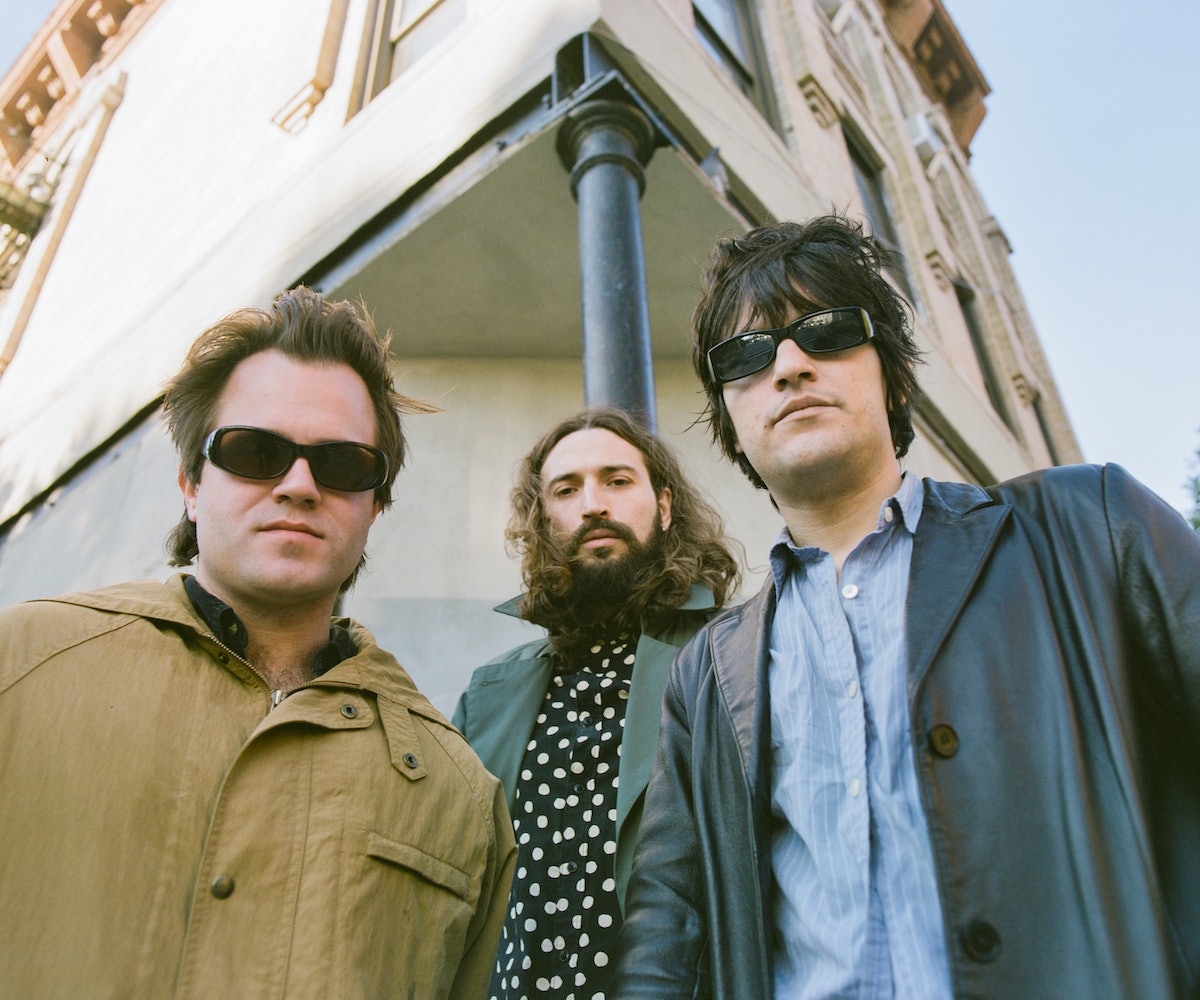 It was a Sunday night in late August on a rooftop in New York when the metal gate in front of the stage was lifted and passed like a bucket brigade through the hands of a crowd eager to get as close as possible to the Brooklyn-based rock band Native Sun. Soon, bodies, too, surfed through the air. I was so lost in the catharsis of the band’s relentless, defiant punk that I didn’t realize the leg I was hoisting up belonged to Danny Gomez, the band’s lead singer who had dived into the crowd. After getting delivered back onstage by the many hands of those enveloped in the exquisite chaos, Gomez looked down and asked, “Is it Sunday?” which was received with raucous applause.

Things are a little calmer tonight. We’re at Milo’s Yard in Ridgewood, Queens, one of the band’s favorite bars, chatting about their debut EP, Off With Our Heads, which was released Friday, Oct. 14 via Grand Jury. Over the course of a couple hours, Gomez, bassist Justin Barry, drummer Nico Espinosa, and their friend, the photographer Conor James who snaps film photographs of us, trade affection in cigarettes, encourage each other to “spout wisdom,” and apologize for cutting each other off as they talk about everything from writing a song every day for three months and John Lennon’s biography, to the demonic cat Gomez and Barry are raising together.

“The mission statement of this band is to play every show like it's the last one,” Gomez says as he lights a cigarette. “If you're gonna come see us, no matter who's there, what's going on, we're gonna bring that because music for us isn’t a hobby or a trust fund. It’s like sweat and blood. If you mean it, it's okay to show it to people, you know? I think apathy sometimes can lead to nowhere.”

Being a young person pursuing anything creative can often feel like an exercise in apathy. Sincerity is scary; it’s much easier to play it cool. But for Native Sun, there is nothing more sincere and urgent than music. People are drawn to their vaporizing guitars and guttural screams; it makes you feel like you’re a part of something. And to Native Sun, you are: “There’s no separation between the crowd and us or the stage and the floor,” Barry says. That’s why the gate came down. That’s why fans hop onstage and dive into the crowd without fear. That’s why someone will lose a tooth at a show and then tell the band it was still the best night of their life.

Bringing the immediacy of their live shows into the recording process of their new EP was crucial for the band. They recorded Off With Our Heads live, straight to tape, with the help of producer Walter Schreifels of Quicksand, Rival Schools, and Gorilla Biscuits. For a lot of bands, recording is about smoothing the edges and striving for perfection. But Native Sun is a band whose electricity lives in its edges and the imperfections. The main goal of their sound is to feel something.

“We’re trying to bring in some fresh blood. I think there’s other voices that should be heard.”

“There's so many things you could do in a recording setting that can be extremely controlled and antithetical to what I value in music,” Barry says. “You can make everything perfect. But it kind of just takes out all the human elements, and that's the complete opposite of what we want to achieve.”

“I think the honesty of it all is what sells it,” Espinosa adds. “It feels honest when we are performing.”

Off With Our Heads, whose cover art is an homage to 1970s Sex Pistols news headlines, is a fitting introduction to Native Sun. You can hear influences from Rolling Stones to The Stooges to The Beatles’ Revolver across its six tracks of fuzzed-out guitar, swirling psych-rock melodies, heavy riffs, and snarly vocals. It’s an EP that is as ferocious and urgent as it is hopeful. Songs like the folky “When She” offer levity with bright, shimmery guitars, while “There’s Revolution” is a driving, guttural rallying cry against apathy with Gomez yowling, “That revolution/ It’s all I’m lusting for here/ And we don’t want it?”

Native Sun’s distinct sound is as influenced by classic punk influences as by the members’ Latinx roots, giving the songs a pulse that makes them danceable even if the guitars are screaming. (“If you don’t have a Latinx person as your drummer what are you doing?” Barry asks at one point.) It makes sense: salsa was the first music that Gomez, who is from Colombia, and Espinosa, who is from Argentina, ever heard.

The diversity of Native Sun is reflected in their fans, too. While mosh pits have been known to be a staging area for pent-up white, mostly-male aggression, their audience, which includes women and people of color, is exuberant and even joyous. (Let us not forget that the roots of punk music are working class and multicultural.) “We’re trying to bring in some fresh blood,” Gomez says. “I think there’s other voices that should be heard.”

The fact that Native Sun is (mostly) a group of immigrants is as essential to their punk ethos as is the DIY approach they’ve taken with their music, which is bolstered by a community of artists and photographers who want to be a part of what they’re creating. Barry joined the band after chipping a tooth in the mosh pit of one of Native Sun’s earliest shows — “I was like, damn, you can't fake this,” he says — and James didn’t even shoot concerts before seeing the group live. Now, he shoots their shows often and recently directed the music video for “When She.”

After Barry goes into the bar to get another beer, he mentions running into another of their friends whom they work with. “We didn't come into this having any of these connections,” he says. “We just came in trying to do something honest and then people are attracted to that.”

“We're all going up together,” Gomez adds. “This elevator's f*cking going up and everybody's getting on.”

Native Sun’s ‘Off With Our Heads’ is out now.