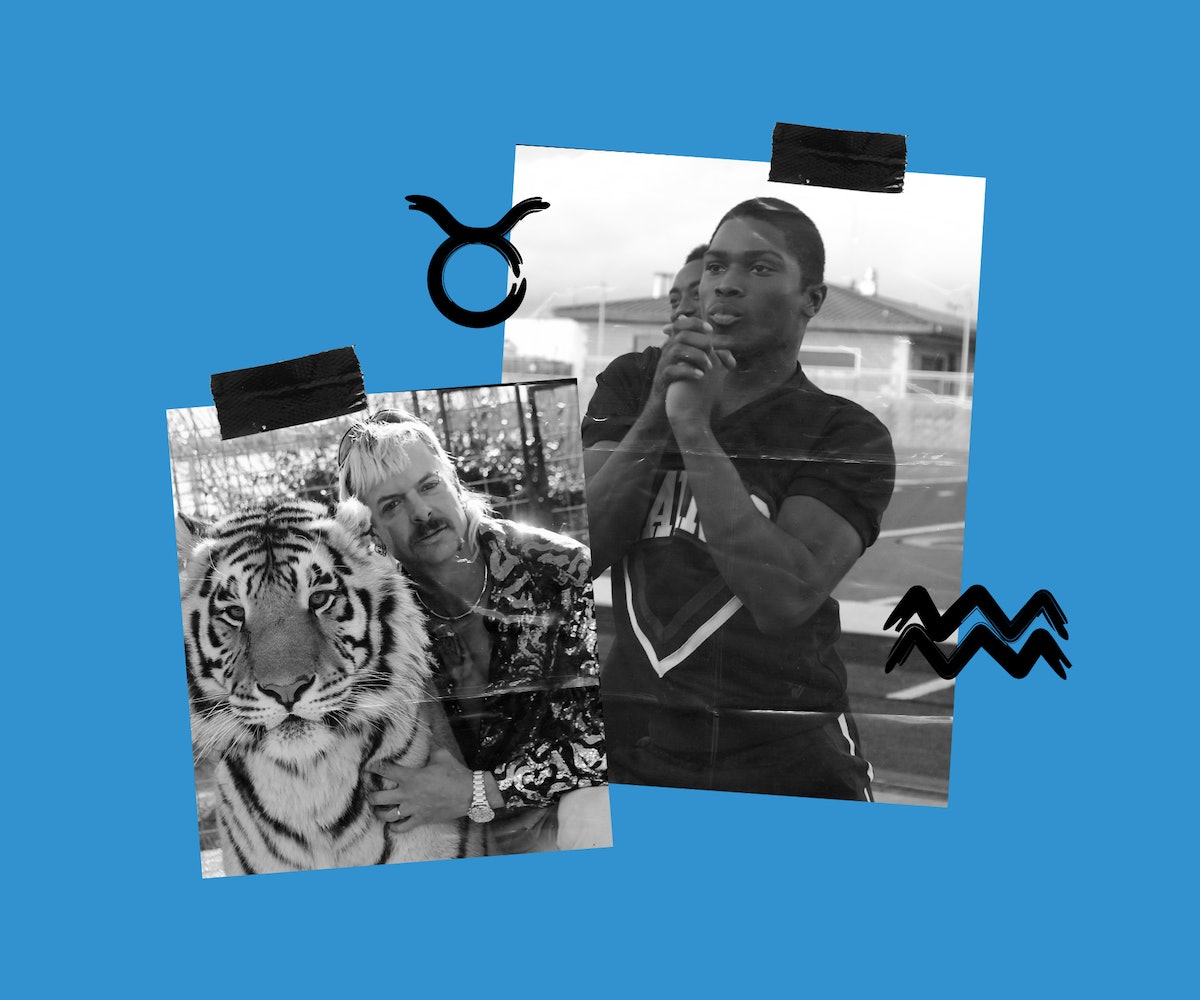 For some, "sheltering in place" or "self-isolation" is a very productive time. As we fortify our individual nests, many of us are flooded with photos of people cooing over their sourdough starters and birdhouses. Kudos to the many babes out there who use their time laid off wisely and productively, but some of us are busy going out of our freaking minds. When meditation and the 20-hundred various sliding scale somatic exercise videos on Instagram Live are not enough, it's OK to let yourself escape a little bit. For the TV watchers amongst us, Netflix and Chill has transformed into Netflix and Calm the F*ck Down, especially if we don't have a sweetheart or chosen fam to while away the quarantine with. There are, of course, 1 million shows you can watch on Netflix, and most of us turn to old favorites or long-running series to keep us company. If that's your jam, stay tuned for a long-running astro-themed binge list. But, if you're in the mood to watch something fairly new, and Netflix is your streaming medium of choice, why not consult this list for an astrology-inspired suggestion?

For the record, private watching falls into moon sign territory, so if you know your moon sign, read for that one. Meanwhile, watching things with friends long-distance (Netflix now has something called Netflix Party that synchronizes video playback and includes a group chat), if that's your thing, falls more into rising sign territory. In any case, I chose shows that only have one season so you could shop around and discover you have more in common with a sign you hate than you thought.

Ahead, what Netflix show you should watch, based on your zodiac sign.

I'll be honest with you: Lots of Aries I know are watching various pandemic shows. Maybe you're one of those. But, if you need a break from viewing the worst-case scenario of your actual life on a screen, might I suggest the show Raising Dion instead? Raising Dion is a sci-fi drama about a single black mother whose 7-year-old son begins to exhibit superpowers he has a hard time controlling. Yet, it's precisely these powers that will help them survive and save others. All Aries are superheroes in their hearts, so this beautiful, well-written, and woman-created show will speak the part of them that feels powerless in the face of current events.

Taurus was a hard one for me to narrow down because, honestly, Taurus is the king of TV and will give almost anything a chance. They're both high-brow and low-brow. They'll watch Love Is Blind and follow it up with Watchmen. But, in the interest of archetype, Netflix's Trinkets fits the bill. In Trinkets, we are introduced to a very earth sign-looking person who, while grieving a parent, keeps ending up in a Shoplifters Anonymous group. Trinkets is about friendship, about the ways in which what we value and believe binds us to each other. Taurus, it is not said enough, is a sign that prioritizes friendship above almost everything in their lives. Trinkets is also a show about kleptomania and the emotional value we place on material things.

GEMINI | 'LIVING WITH YOURSELF'

Living With Yourself is a perfect Gemini show for many reasons, least of which is the fact that Paul Rudd is our ever-lasting gobstopper of emotional content from a quirky male protagonist. Set in a time that feels eerily close to our own, this show introduces us to a man who, at his wits' end, seeks to undergo a process by which he becomes the best version of himself. Essentially, he wants to be upgraded. Due to a fluke in the procedure, Rudd's character discovers that his optimized version is a copy and his original self, flaws and all, still exists. Yes, this is a show about cloning, about splitting, about twins. It's also a show about the maintenance and truth of relationships, ethical codes, and refusing to choose one when you can have both. All Gemini gold.

Gentefied is a show about a Mexican-American (extended) family that is fighting to keep their family-owned taco shop open in the face of a rapidly changing and gentrifying neighborhood in Los Angeles. It's also a show about intergenerational care, creative ambition, mutual aid activism, and not giving up on your dreams even if you were raised to believe they are impossible. It's a little sentimental, which Cancers need to get hooked, but I mean sentimental in the best sense of the word. The stories are compelling, the characters are complex, and the ties between them are tried but true. Family, food, and reciprocity: the best ingredients for Cancerian investment.

Spinning Out stars Kaya Scodelario (aka Skins' Effy), which is honestly enough reason for anyone to watch this show. There's something about Scodelario and the energy that she brings to any role that a Leo is bound to respect. Her effortless sensuality, her loner vibes, her Mars and Venus in Aquarius. In Spinning Out, Scodelario stars as Kat, an ice skating virtuoso recently traumatized from surviving a major head injury. Kat comes from a working-class family that is enmeshed in the ice skating world, made up of a single mother and a younger sister. It's a show about class, mental illness, girlhood. It's a deeply Leo show about the trouble of wanting to be a star but only on your own terms. And, about pride — what it costs and who it protects.

The Politician is my Virgo Netflix show choice for a number of reasons, the first of which is that Virgos are purveyors of quality, and this show is incredibly rich on all fronts: plot, characterization, wardrobe, writing, and cinematography. The trailer for The Politician hardly does it justice, but what we're introduced to is a young man competing for the title of student body president. And, if we are to take it at face value, we might think that it's simply a high school dramedy about high-class competition. But Virgo never takes anything at face value. Perceptive Virgos who commit to an episode or two will find that what awaits them is a secret (homosexual) affair, a healthy sprinkle of something like a whodunit, class warfare, attempted homicide, and a light dash of medical drama. For a Virgo, there is no greater pleasure than sorting out the various storylines and plot strategies afoot while relishing the golden hues and sardonic humor.

Unorthodox is a memoir-inspired miniseries made up of four 50-plus-minute episodes about a young woman named Etsy who has escaped her Orthodox-arranged marriage and fled to Berlin. Pregnant at 19, she leaves everything behind to start a new life. Because Libra is a sign that deals with partnership and the combination of assets and values, a show that investigates marriage as an institution is right on track. But there are other aspects of Unorthodox that make it a Libra experience. In Berlin, Etsy must build a life from scratch, and the life she finds is one that reveres beauty in general and music in particular. Venus-ruled Libra is no stranger to seeking beauty in the midst of despair. Justice-oriented Libra believes in free will and choice and will relish a show about a woman who defies all odds to fight for her right to choose herself.

Alright, Scorpio, you probably already watched all the new episodes of Sabrina with our beloved Kiernan Shipka (Scorpio) and investigated all manner of occult-themed English-language shows on Netflix. Good thing, then, that we are not limited by language. Ghost Bride, a Taiwanese-Malaysian show subtitled or dubbed for your pleasure, is about a woman who accepts a wealthy family's proposal to marry their dead son so that she might save her own family from debt. Ghost Bride is not so much about marriage as it is about secrets and the underworld, which, coincidentally, is where the protagonist spends most of her time. Not so different from Scorpios everywhere. In addition to underworld investigations, which are Scorpio bread and butter, the Ghost Bride offers us a murder mystery and episodes chock-full of curse-breaking, ghost-banishing rituals.

OK, lots of Sagittarians are probably out there scouring the internet for one of two things: a weird show like Sister Wives or a thriller like The Fall. These are not the Sagittarians I am thinking of when I say Feel Good is the perfect show for you. I am thinking of the other ones: the anxious Sags out there who need a release valve. The dark humored drug-loving delinquents who have been waiting for a long time to watch a show about a queer comedian who is desperately trying to stay sober and stop trauma-bonding. While the portrayal of AA meetings might be completely off the rails (so much cross-talk and why doesn't Mae just try out a different meeting, a queer one perhaps?), the playful banter, sexual misadventures, and jokey avoidance of all conflict is deeply Sagittarian territory.

A lesser acknowledged quality of Capricorns everywhere is their competitive nature, which often works in shadows, overextending itself until you have a Black Swan moment on your hands. That's because, in Capricorn's dedication to their vows and their long-term plans, they often put a lot more in than they get out. Cheer is a very good show for a Capricorn whose cardinal work, work, work energy yearns for validation and mirroring. Cheer is a docuseries that focuses on the lives of five cheerleaders who are part of a nationally ranked team and their coach. Under the blanket of sportsmanship, we find a show about dedication at any cost, broken bones, and incredibly resilient hearts.

Alright, I don't mean to feed the hounds of jealousy, but there's just no way I could give Aquarius anything other than Tiger King. Yes, the show is (partly) about lions, but it will make 8/10 Leos weep to look at them. To watch Tiger King is to stand on the other side of an animal's suffering and marvel at the deterioration of the human condition. As Leo's polarity, this is an Aquarius power. Also, Tiger King is weird. Like, bonkers weird. And, I'm not even talking about Joe Exotic (who is the purest example of a Pisces demon) or Carole Baskin (a Gemini with an Aquarius moon) — although, if I was, I might mention the fact that unconventional family structures and polyamory, cults, and drug lords are deeply Aquarian territory. I'm talking about the fact that so much of this show relies on our inability to fully trust or relate to any character lest in the next breath they shoot up a blow-up doll or go back to work after losing an arm to keep up appearances.

Unstoppable is a Spanish-language dramedy that takes place in Mexico and centers around four young women, three of whom are old friends and one an outsider that finds her way to the center of their story. Unstoppable is a show that is all about escapism, road trips, and running away in general, behaviors that Pisces are very good at. It explores party culture and party drug culture, which are archetypal Piscean intrigues. But, for the less risk-taking Pisces, there is also the worshiping of poetry and recitations by the fire on a dark beach, not to mention Sapphic scenes at the water's edge.