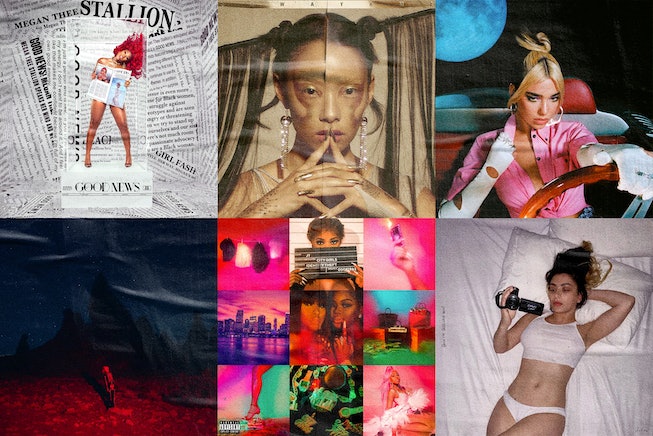 2020 proved to be a difficult year for the entire planet, and the entertainment industry was no exception to those hit by crisis. Still, musical output continued to flow with artists creating and releasing some of their best works, even amidst the chaos, pain and transformation of the year. Read on for NYLON's Editor Picks of our top five favorite albums of the year, in no particular order.

The stunning mix of heartbreaking lyrics and dark, biting humor will make this a future classic for the extremely online generation.

Every track on this excellent record feels at once fresh and familiar, with lyrics that are meant for windows-down sing alongs.

With songs like "circle the drain" that expertly encapsulate the lows of daily existence, much of "color theory" could soundtrack a pivotal scene in teen movie, which is a high compliment.

After Hours, The Weeknd

With cinematic music videos, ingenious live performances, a viral TikTok dance, and The Weeknd's commitment to playing a new character — a degenerate spiraling after a Vegas bender — "After Hours" was inescapable for the entirety of 2020. Luckily it's stacked with hits, so I did not mind one bit.

JT and Yung Miami swooped in to save our quarantine summer with this album full of confident, party-ready bangers.

After just one listen of the surprise quarantine album, I declared it my favorite Taylor Swift album of all time. Countless (and I mean countless) listens later, and that sentiment still stands.

On her sophomore album, Bridgers delivers some of the most gut-punching sad lyrics of the year, and in the next breath can make you LOL with the her now signature one-liners ("I hate your mom" makes me laugh every time) — a skill that makes her one of the most captivating musicians out there right now.

Down In The Weeds, Where the World Once Was, Bright Eyes

Listen, if we're being honest, this Bright Eyes album, the band's first in eight years, would have to really suck for me to not include it among my favorites of the year. Luckily, it didn't. In fact, it's really, really good — and dare I say, worth the wait.

I truly do not know if I would have made it through the first few months of quarantine without this album. This world may be bullshit, but listening to Fiona certainly helps.

A quiet burn of an album that I keep returning to time and time again. It also contains perhaps my favorite song name of the year — the haunting "I Used To Hate My Body But Now I Just Hate You".

Maybe We Could, Kllo

I've been following Kllo since they were lil music bbs (shout out Ghostly!) and I can't wait until shows are a thing again so I can see them play this album live.

Leave it to prolific artist Charli XCX to drop one of her best albums while in quarantine. The "Forever" music video still makes me cry.

A solid dance album that kept me off the couch when the city was on lockdown.

How Can I, 박혜진 Park Hye Jin

An album that makes you mad that you didn't find out about the artist sooner. I can't wait for what Park Hye Jin comes out with next, but I'll enjoy the rest of her discog until then.

If you're wondering why Bad Bunny is always breaking records with his music then you definitely haven't listened to YHLQMDLG yet.

Chicago four-piece Slow Pulp made some of my favorite indie rock this year. Their album Moveys, about depression, family, and wanting to be better, traverses some shadowy territory, but the sound bursts wide open. Over 10 songs, they tackle fuzzy shoegaze, dewy folk, and the warmest almost-country that feels like everything you want country to be. All are good.

Maybe We Could, Kllo

I admit this album followed me everywhere this year: to the grocery store, my kitchen, the shower, my bedroom... basically 90 percent of my footprint. Something in the way these two Melbourne cousins combine electric U.K. garage and 2-step with soft and sleepy vocals that feels nearly vortex-like. It's a hypnosis I never want to stop.

The debut album of London's breakout pop girl Rina Sawayama is confident, relatable, and full of stadium-sized bangers that aren't afraid of broaching complex subject matters like family, heritage, sexuality and belonging. It's everything I wish 5-year-old me had alongside my beloved Britney Spears CDs.

Even after a tough year, thee Houston hottie does not disappoint. Her debut album is everything you want it to be — deliciously vulgar, shady, and fun — and a bit of what you didn't know it could be; like how incredibly addictive saying the word "body" could be.

This searing and sinuous record from New York musician and angel voice-haver Moses Sumney includes some of the most beautiful, tragic, and tender songs I've heard this year. "Polly" will never not softly shake me to the brink, and “Me In 20 Years” will never not incite an existential spiral. It’s all worth it though.

A no-skip, catchy drill mixtape from a larger-than-life artist who deserved way more time on this earth. “Shake the Room” is my first request when we’re allowed to party again.

This album encapsulated a lot of how I’ve felt during quarantine — vulnerable, messy, scared, grateful, and ready to self examine and course correct. It makes me want to cry and jump on my bed at the same time.

The self reflection, solitude, and fragility that went into each and every word on this album is all but tangible. It’s soft and sad and heartbreaking. “not a lot, just forever,” always makes me tear up.

If you looked at my 2020 Apple Music Replay, you would think this is the only album I knew existed. It’s a perfect album to me — “this is me trying” and “invisible string,” perfect songs — and I’m so glad I had it to lean on this summer.

I spent most of 2019 listening to the then 17-year old’s mix tape, ‘We Love You Tecca,’ and I wasn’t disappointed by his debut album. It has all of the catchy melodies and rhythms I loved about the Soundcloud rap era, and his voice just floats.

After Hours, The Weeknd

Snubbed by the Grammys or not, After Hours was the record of the year — “Blinding Lights” was everywhere, and The Weeknd’s year-long stunt wrapped up under bandages reflected the sad absurdity of the year.

Released all the way back in January, Selena Gomez’s Rare became the quirky pop record I would return to all year long.

Lil Baby's sophomore album, which debuted at No. 1 on the Billboard 100 and stayed in the top spot for five weeks, had already proven itself when the Atlanta rapper added the 2020 anthem “The Bigger Picture" to the album's deluxe version.

The excellence-defining sisters returned with an album that declares Chloe and Halle are all grown up, and not messing around when it comes to their talent.

Don’t sleep on Uzi’s return to earth — and music — on this extraterrestrial collection of bangers.

I love how Jhene Aiko balances strength and calmness on 'Chilombo.' It's an emotional rollercoaster that moves from getting over a breakup to sexual healing. It's the album I kept turning to when I was in my feelings. Knowing that it was recorded using singing bowls made me feel like I was getting my own sort of therapy as well.

The first time I listened to 'Chromatica,' I wanted to dance and cry at the same time. It's the most Gaga Lady Gaga has sounded in a while and it was exactly what the world needed in the midst of the pandemic.

I never thought much about Big Sean before 'Detroit 2,' but this was one of the albums I listened to from start to finish multiple times this year. What's great about it is that Sean lets everything flow out as if he's reading entries from a diary. It's emotionally candid to the point where it leaves you excited to see what he's going to say next.

This was the album I've been waiting for years for Miley Cyrus to make. Her voice was made belt and wail the way it does on the rock-influenced LP. Also, the fact that she was able to have Stevie Nicks, Billy Idol, AND Joan Jett featured on songs makes me feel like life is coming full circle.

It Was Good Until It Wasn't, Kehlani

'It Was Good Until It Wasn't' is a really really good R&B album. Kehlani's voice sounds so clear and strong, it makes you feel exactly what she's feeling as she sings each song. "Serial Lover" and "Change Your Life" were my two favorites.