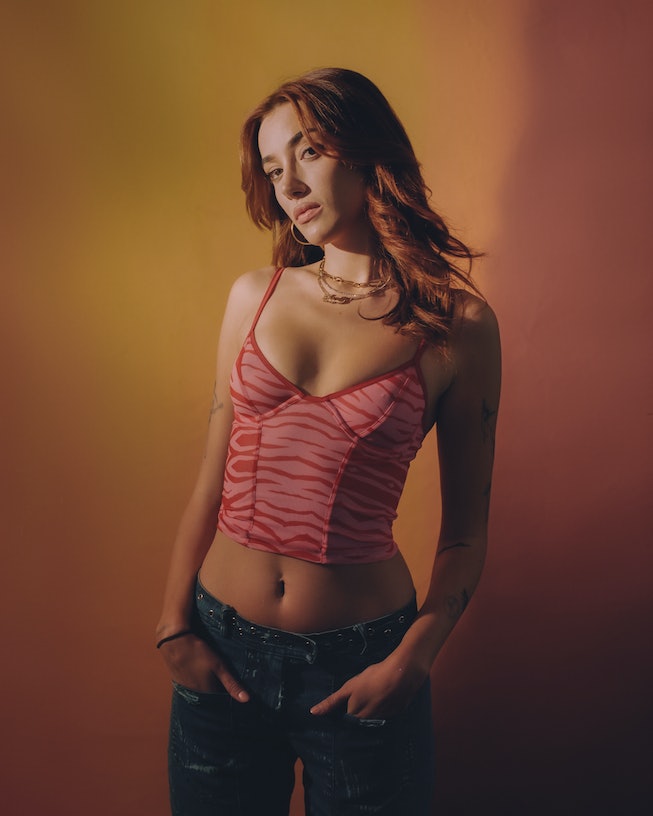 Olivia O’Brien’s plan for pop domination is simple. “This is my business plan: release a song. That is all I want to do. Just ASAP, release a song. And then, maybe after that, another song.”

After nearly two years of waiting (and one viral TikTok song), O’Brien is ready for her next phase — and to release some new music. Enter: “Bitches These Days,” a cheeky pop ode to two-faced friends, out now. “I wrote that song three or four months ago, which, in terms of timelines of songs coming out, that’s pretty f*cking good,” the 22-year-old says. “Most of my songs I sing for literally years, and I get so tired of them. With Coachella coming up and getting back into the flow of things, I wanted it to be something that I was really excited about. I would just get annoyed if I wasn’t passionate about it.”

The song is the first of a slew of new music O’Brien plans to release. “I have so many f*cking songs,” she says. “So much that I have no desire to write. I’ve got nothing left in my brain. The music has gone nowhere, so now I’m on strike. I just want to release the new stuff.” To kick-start the next era, she’s involving her fans directly, launching a TikTok campaign to crowdsource the cover art for “B*tches These Days.” “I was not expecting so many people to enter it,” she admits. “After the first couple of hours, I started getting really stressed. I was like, ‘F*ck. What have I done? How am I supposed to pick one of these?’”

Too much of a good thing is something O’Brien is getting used to, whether it comes to new material, art, or, as she’s faced with now, narrowing down her hits into one cohesive set list for Coachella. At the age of 13, she scored an accidental smash after sending rapper Gnash a snippet of an original song, “i hate u, i love u.” Most recently, she rose to the top of the charts with her song “Josslyn” after it started trending on TikTok. “I think everyone was getting really into TikTok around that time,” she recalls. “I credit COVID with launching TikTok to be as big as it is.” Despite the song’s success, O’Brien, who boasts 1.4 million followers on the app, has mixed feelings about the role TikTok plays in the music industry. “Been thinking about quitting music and becoming a housewife bc i’m getting tired and the music industry has become a glorified TikTok competition,” she tweeted back in February. “I really do think that TikTok has changed the music industry,” she says now. “It’s almost like you can't escape it, and it’s just never going away. So many people write songs trying to make them do something on TikTok, and I just think it’s the most cringe, disgusting thing ever.”

O’Brien is not one to hold back what she’s feeling, whether it’s on Twitter or in her open, brutally honest songwriting; when asked how she’s feeling ahead of Coachella, her answer is expectedly blunt. “I have so much anxiety,” she says without missing a beat. “Even before any regular show, I don’t like to have people in my green room. I don’t like to talk to anyone. I like to be alone, and I don’t want to get excited about things. I have to be in my head and be silent. And then I go on and I do the show, and then afterward is when I celebrate.” It’s gone so deep that she’s even instated a “no Coachella talk” rule among her friend group. “My friends are already talking about the outfits they’re going to wear for Coachella, and the houses they’re going to stay at, and all the parties they’re going to go to,” she says. “I was just at lunch with my friend Stas [Karanikolaou] and she was like, ‘So, I need six outfits for Coachella Weekend One and six outfits for Coachella Weekend Two. And I’m getting custom.’ I was like, ‘What? I’m playing and you’re getting custom outfits for a weekend?’ They’re so crazy about Coachella, too, so it’s obviously something they’re going to constantly talk about. I’m just sitting here like, ‘Oh, God, it’s so soon.’ I don’t even know what I'm wearing.”

Though she may be (half-jokingly) doubting herself now — “I really need to get in shape,” she says at one point — the thousands of people who turned out for her recent It Was a Sad F*cking Tour know that when O’Brien hits the stage, she doesn’t mess around. “I love tour,” she continues. “I really do. I think it’s one of the best parts about being an artist. So [at Coachella], I’m going to look at the people in the front row because that’s who will give me the energy to survive the performance. Honestly, the thing I’m most nervous about is just that it’s going to be so hot and I’m going to be so sweaty. But we’ll have to figure that out later. I’m just trying to push every worry that I have back out of my mind until literally the last minute.”